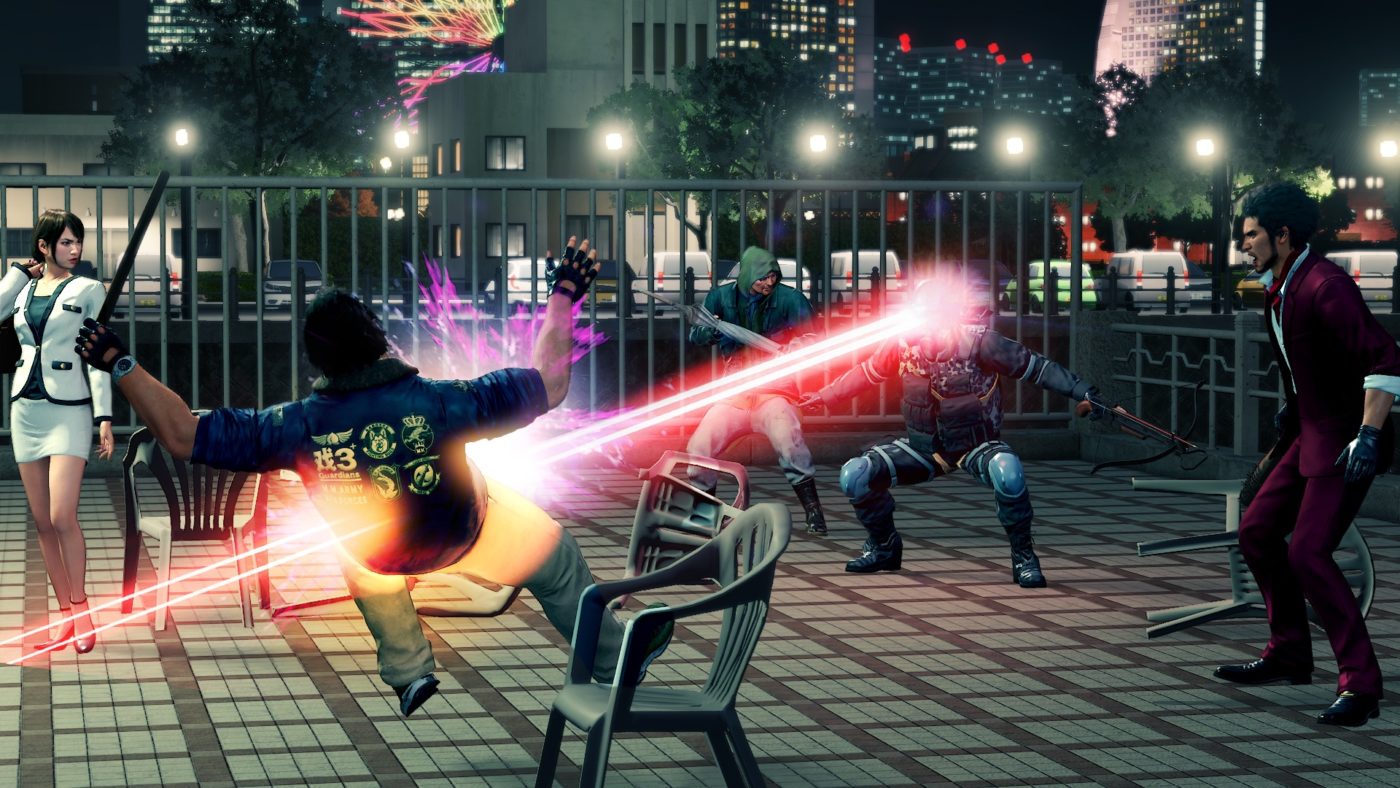 A new batch of faces, living in a sea of tales in a yet so familiar city, Yakuza: Like A Dragon is the eighth main line entry in the Yakuza series and serves as a start to new beginnings. Taking place roughly three  years after the events of Yakuza 6, players will take on the role of coming up Yakuza member, Ichiban Kasuga. 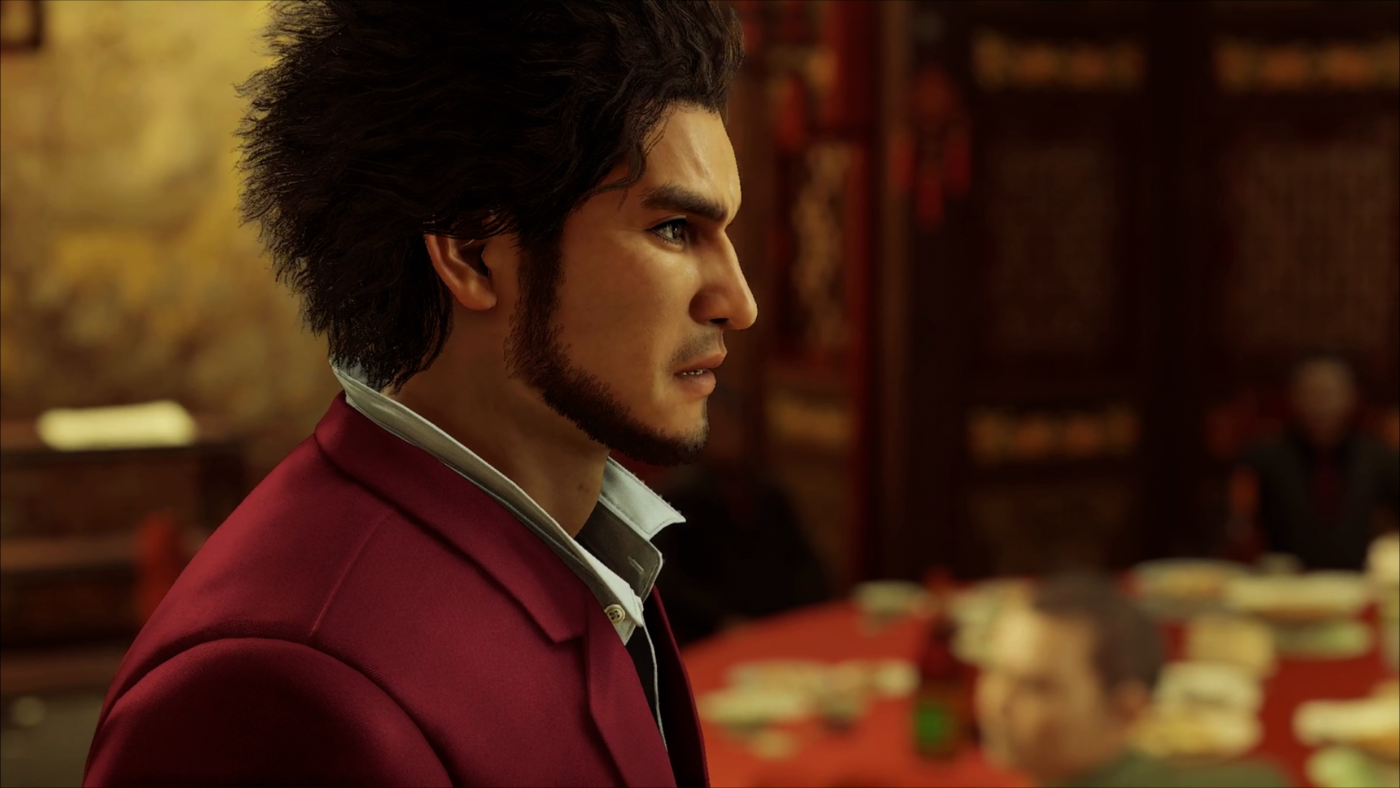 After being rescued by the head of the Arakawa family, Ichiban dedicates his life to being a Yakuza. Unlike the typical member, Ichiban is a kinder, noble, and most of all, loyal Yakuza, following his own gut instinct in what he believes a true Yakuza should be. However, as fate would have it, Ichiban would soon find himself taking the blame for a murder he did not commit in order to help prevent an all out war with a rival family. After spending 15 long years in prison, an unchanged Ichiban is released into a very different world that he left. Only one thing is on his mind and that is to get back in with the Arakawa family. Unfortunately he soon finds out that the family he fought to protect is now on the side of the very same threat that wanted them out. Now seeking answers, Ichiban finds himself in the middle of an all out war covered in a shroud of twists and deception.

Look, if you’ve played any of the past Yakuza games and loved them for their stories, then without a question of a doubt you are going to love the one presented in Like a Dragon. It has the series’ drama-filled narrative set on a rollercoaster of high emotions. And while it certainly calls back to past game events, with some familiar faces here and there, new players will find no issue with fitting in as everything is told from a whole new perspective. 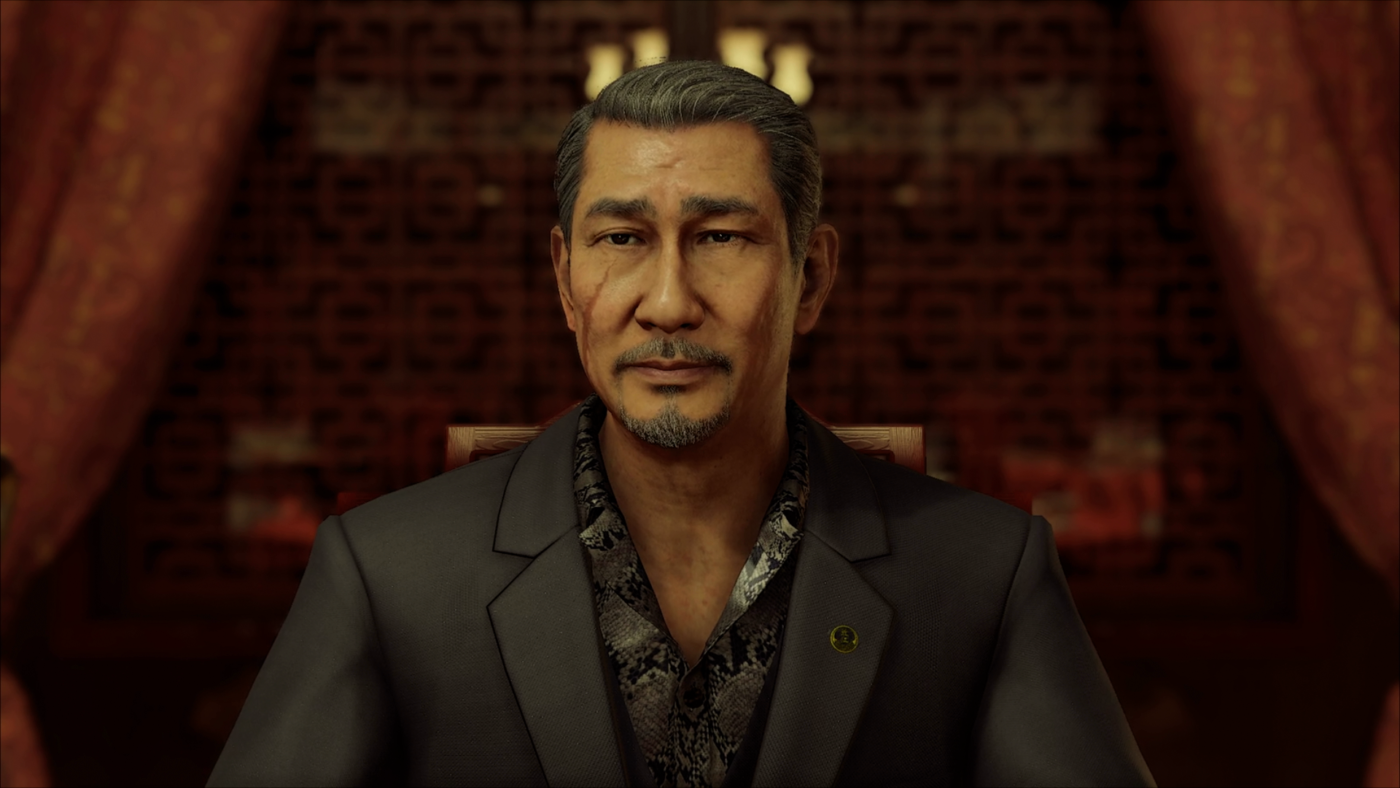 This does go without saying that the characters are extremely likable and relatable. Ichiban in particular feels like a mix of Kiryu with his morally high view of helping everyone out, but has the charismatic of Majima (Kiryu’s rival) when it comes to dialogue and action. His personality feels far more fleshed out than any new character before, with you knowing exactly who he is within the first hours of game time. After all, this is a new fresh start for the series, so it’s important that the new character fits right in with not just the world, but with fans, and most of all, new players. I should mention that while the title did release a year at the start of this year (2020) in Japan, the Western release does feature optional English dub.

I’ve grown custom to listening to the Japanese dub with English sub titles, though the performance of the English cast is surprisingly good. I do recommend first time players to play through it with Japanese voices as it does feel to have a whole different emotional range, but at least the option is there for those who prefer less reading.

One Punch at a Time

Being a long time Yakuza fan (since PS2), the news that Like a Dragon would be trading off its beat-’em-up combo mashing for turned-based combat, drew much fear out of many. I mean, Yakuza games have always prided themselves on being heavy on their Japanese drama narrative, but the character themselves are as tough as they get and the gameplay has always shown that.

Walking down the streets of Kamurochō as Kiryu (series previous protagonist) has always felt badass, and the combat of just non-stop beating down was all too fun for the time. Admittedly, I do think the series had gotten stale (gameplay wise) over the decades of releases, though 0 & both Kiwami brought much needed refinement and improvements. Regardless, the whole beat-’em-up combat has always been in the roots of the Yakuza franchise, so the rise of concern over the new gameplay is definitely a divisive one. 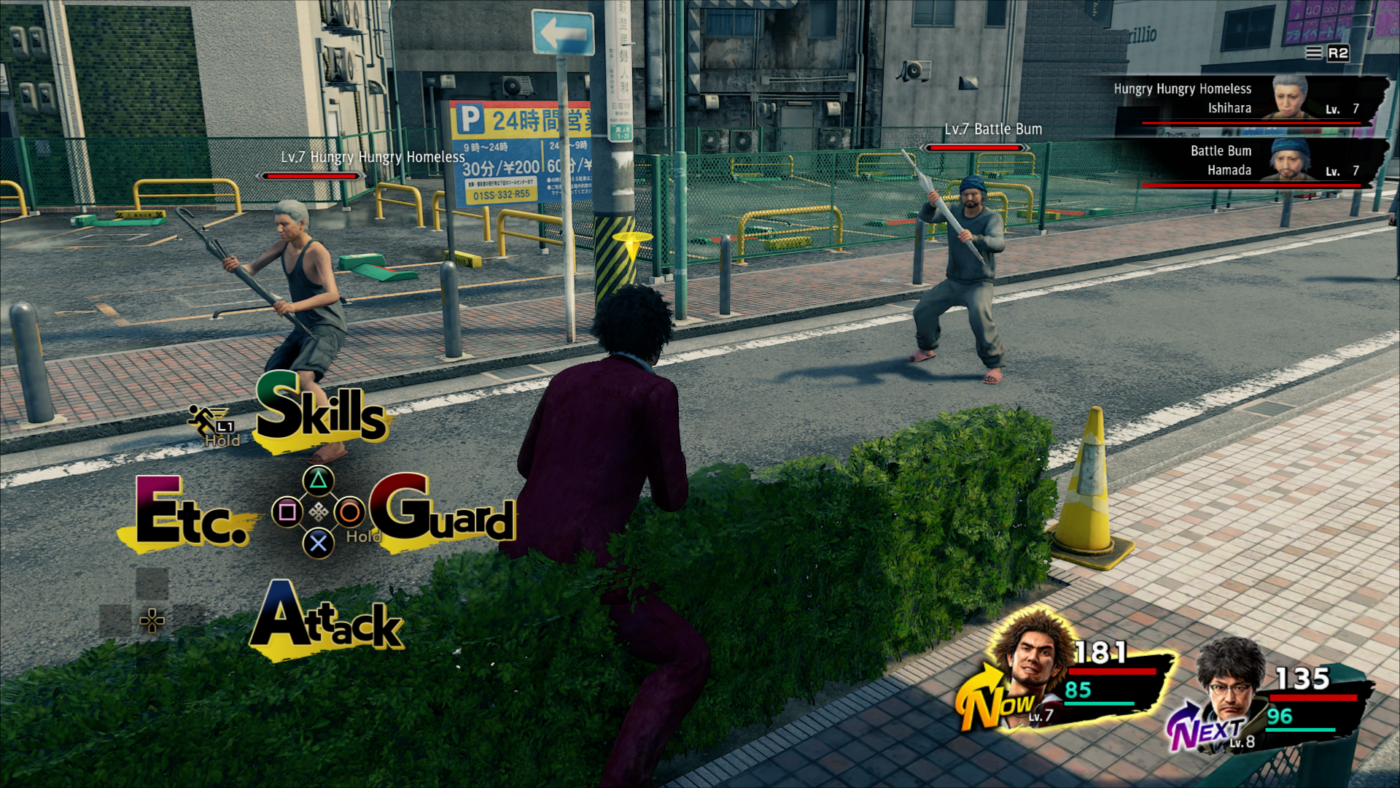 However, after spending 30+  hours with the main campaign and some side-quests, I’m glad to say that this is still very much a Yakuza game, despite playing differently. Inspired by a lot of turned-based games before it, Like a Dragon embeds the fast-paced action that players have come to love with some classic, long yearning turned-based combat.

Much like classic Final Fantasy games, the flow of combat goes you attack with all your characters and then the enemy. It’s nothing really groundbreaking truth be told, yet it feels satisfying because it fits so darn well with the setting of Yakuza. 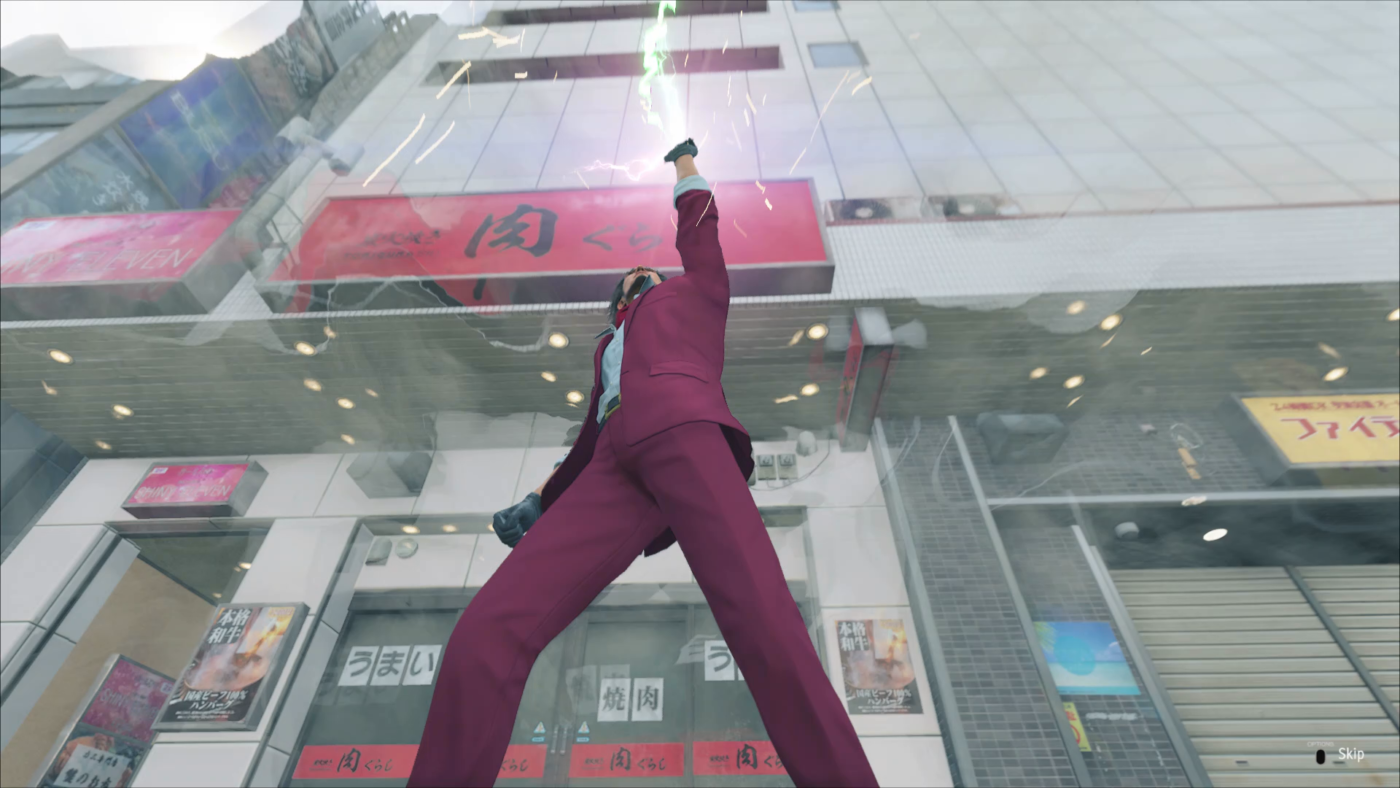 Yakuza games have always had a grounded experience, with any of the silliness being “within” some sort of logic. Yet with the turned-based combat, it truly allows to developers to lean more into the wackiness of the series. Now, I don’t want to spoil things, but for comparison sake, expect to see a lot of Final Fantasy-esque summoning’s along with a number of ridiculously stupid moments. It’s a very fun game, and the turned-based element really adds to it, especially when taking into account some of the story explanation behind the ridiculousness. I mean, the game features an encyclopedia of all the enemy variants (and there’s tons) and classifies them as “Sujimon,” which is a clear rip-off of Pokémon. There’s so much that the game adds because of the RPG elements, most of which are just hilarious yet fit perfectly in the massive world that the series has crafted.

There are a few things I wasn’t a big fan on, that being the strange spikes in difficulty and the fact that characters move on their own during combat. The former is something that can hopefully be patched, but the latter is a rather big annoyance. Seeing them following strange paths, or running into objects just to get to enemies did slow the combat down, and AoE (area of effect) attacks would often manage to just hit a few targets, since a character wasn’t close enough. I don’t mind that characters can move about, just don’t take their control away from me. It’s a system that doesn’t feel unified at all, thus leads to frustration during combat. I’m also not very big on the job class system as often they were overlooked with characters being spec into their strongest, and unique skillset.

Touching a bit on the spike on difficulty, expect to see a lot of grinding. While RPG fans are no stranger to difficulty spikes accompanied with grind, the placement of it (latter parts the game) just feels out of nowhere and in an excessive amount. Probably spent a good few hours grinding out my level and earning a large amount of cash that just seemed unnecessary in length.

Visually, the game looks amazing on the PS4, and for the most this has been true ever since Ryu Ga Gotoku Studio made the switch many years ago with Yakuza 6. I’ve never had any complaints about the game visuals, and I feel that Yakuza: Like A Dragon peaks out everything the engine can do on current-gen system. Details are abundant in the environments, and character models look stunning and filled with deep expressions. The coloring is astonishing,  I personally feel the series doesn’t get enough praise for it’s visuals, always loved that aspect of Yakuza games and seeing the studio go through changes with each iterations is always a pleasant surprise. 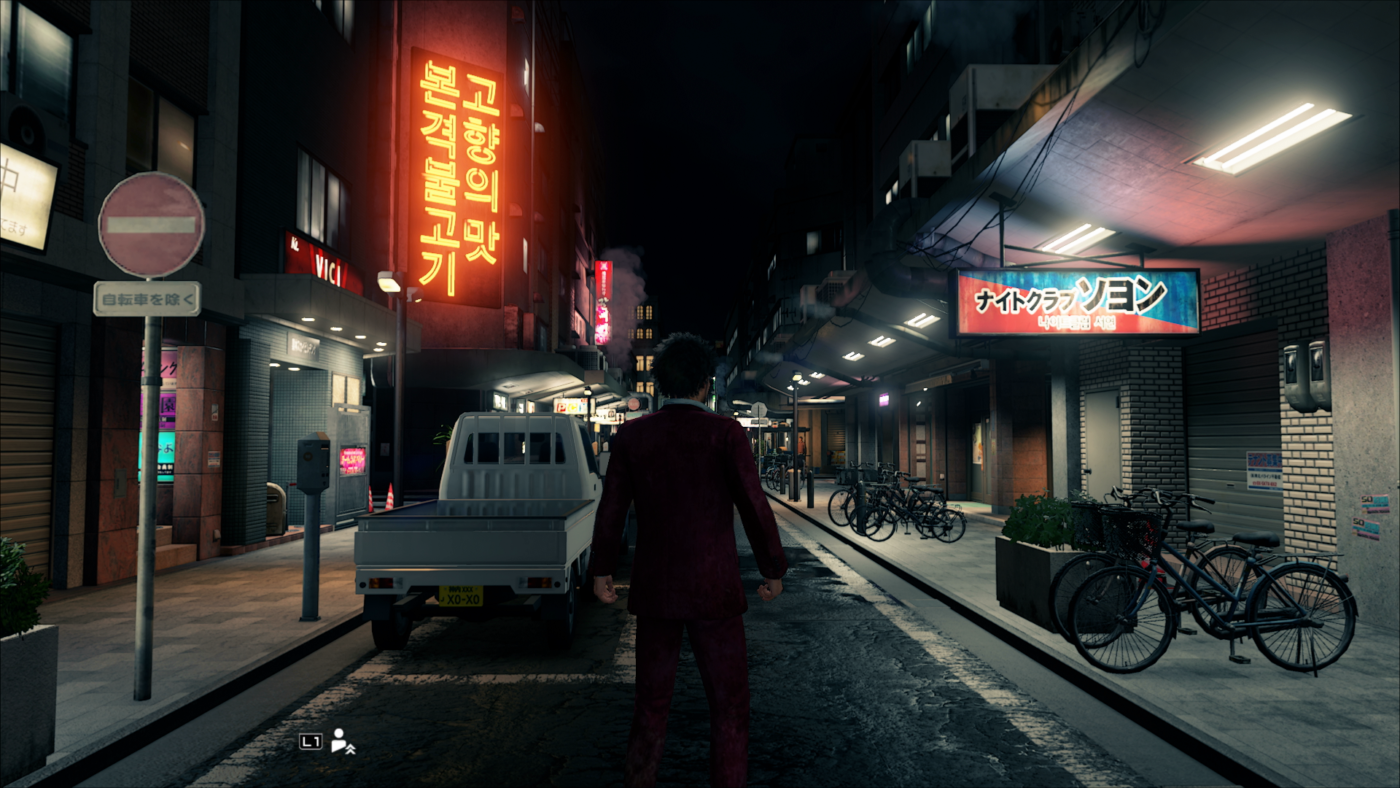 However, it has become more and more clearer since the release of Yakuza 6 that the engine has become somewhat taxing on the current-gen hardware. frame rate dips are pretty noticeable when exploring the world, with cutscenes even having some slowdowns. This has always been an issue since the introduction of the Dragon Engine, and while it doesn’t make the experience unplayable in anyway, those debating on whether they should play it on current-gen or next-gen will undoubtedly have the better experience on the newer hardware. Still, the engine does at least utilize whatever juice it can get out of the PS4, which only leaves us excited to see where it goes when a Yakuza game is built from the ground up for next-gen.

Honestly, there’s very little to dislike about Yakuza: Like a Dragon. While the gameplay is a drastic departure from what fans have grown to love, the change is one that is done excellently well that it fits right in with the series. At the end of the day, Like A Dragon is still very much a true Yakuza game, narrative driven with fun, addicting gameplay that is easy to pick-up by anyone. A fresh, bold new start for the franchise that still holds true to it’s roots. I for one am looking forward to see the future of the franchise. Hopefully it continues down the road of being a turned-based title, all while reinventing itself as it goes.

Yakuza: Like A Dragon review code provided by the publisher. Game tested on the PS4 Pro with all images captures via external device.. You can read SP1st and MP1st’s review and scoring policy right here.