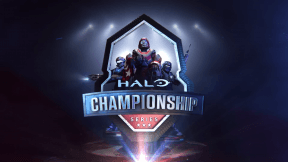 News 4 Prize money for the upcoming Halo Global Championship reaches a new milestone as fans continue to support crowdfunding efforts through Halo 5: Guardians REQ packs. According to developer 343 Industries, contributions have reached over $700K to-date, raising the total prize pool to a cool $1.7 million, which will be divvied up accordingly among the 16 participating teams. […]

Get Updated On Season 2 Of The Halo Championship Series, Finals Later This Month News 7

News 7 In another Halo Championship Series update, 343 Industries Community Manager Andy “Bravo” Dudynsky recaps the events leading up to last month’s big $50K LAN tournament at HCS Indianapolis, including highlights from the HCS Online Cups. Upcoming still is the HCS Season 2 Finals at the ESL Studios in Burbank, California, a $150K tournament where the season’s […]

News 3 Halo developer 343 Industries has announced detailed plans for the anticipated second season of the Halo Championship Series following the conclusion of the first season last month at PAX East. Season 2 of Halo’s ongoing Championship Series will be bigger and better than ever, says the studio, thanks to a handful of updates and improvements, […]

News 2 $100,000 laid on the line this past weekend for eight of the world’s best Halo eSports teams who competed in Season One of 343 Industries’ first-ever Halo Championship Series. The successful tournament, hosted by ESL, concluded just yesterday in Boston, Massachusetts during the events of PAX East 2015. Audiences were invited to spectate both in-person and online as teams […]