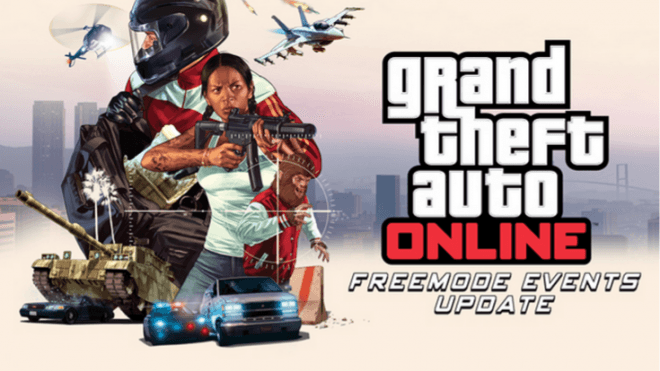 Freemode just got a lot more interesting in the world of Grand Theft Auto Online.

Today’s update on PlayStation 4, Xbox One, and PC marks the introduction of a selection of brand new activities that players can take part in while in Freemode, without the need for any loading screens or lobbies. According to Rockstar there are a total of 11 new modes to participate in, as well as 19 different Freemode Challenges. On top of that, the update introduces two new Adversarial Modes, Cross The Line and Hunting Pack.

The Rockstar Editor also makes its way to PlayStation 4 and Xbox One “with several new features that have been added to it for all platforms – including an ambient audio and sound effects library, Snapmatic integration, Director Mode updates, and new fonts,” says Rockstar. The GTA Online Creator has also been upgraded with the “ability to properly stack and overlap Props, as well as the ability to save Prop templates that can be reused throughout custom Job creation.”

You can download the free update now, if you haven’t yet. Below are details on all of the new modes that are now a part of every-day life in Los Santos.

“Become the Beast – a stronger, faster (and hairier) version of your character – and flee relentless pursuers all over Los Santos and Blaine County.”

King of the Castle

“An every man for himself turf war where you’ll need to ascend and claim the designated ‘castle’ as your territory – and then fend off everyone else as they go all out to dethrone you.”

“Grab the briefcase and go! Jump into a car, bike, boat, motorcycle, P-996 Lazer or just run for the hills with the coveted contraband in hand. Be one of the three players who hold the briefcase the longest to score GTA$ and RP bonuses.”

“The first player to enter a marked vehicle will become the Moving Target, tasked with safely delivering the vehicle to a designated location. While the marked vehicles will be durable, it’ll take some serious elusive finesse to survive other players’ attempts to destroy you before the drop point.”

“Compete with all your Freemode competitors in a mad dash across southern San Andreas. Who will be the first to race or fly through all the designated checkpoints for fame, fortune and reputation?”

“Take control of some of heavy artillery and duke it out with the mercenaries from Merryweather Security. Rack up GTA$ and RP for each kill.”

“Fight for possession of valuable contraband and see if you can make the drop first in this ruthless smuggler’s run.”

“When you see the enormous dome appear over the Los Santos skyline, jump into the closest ride and find your way into it before the timer starts. Then, stay within the dome as it begins to move and shrink, smashing and bashing rivals out. Those who are left out of the dome for more than 7 seconds will explode. See if you can be the sole survivor at the very end.”

“Whet your appetite for destruction with an all-you-can-eat buffet. Get strapped with a favorite piece of heavy artillery and let loose over a given time period with no wanted level in sight. Wanton destruction is rewarded with every bullet hole and blast. The player with the largest property damage bill who causes the most destruction will win.”

“A Sanchez, a Golf Cart or another otherwise humble mode of transport is made into an indestructible marked vehicle. Take command of it and avoid all the other jackers and assailants in your session to be the one in the driver’s seat when time runs out. Try and go for it solo to keep the entire GTA$ award for yourself, or shrewdly partner up with a gunner to ride with you for protection and split the earnings.”

“Record the fastest time possible, with a new course to master every week that awards you GTA$ and RP for beating our target time or your own personal best – and a championship worthy haul if you can take down the World Record.”

“Compete in 19 unique Challenges against your Freemode friends and foes. See who can perform the longest jump, who can drive the farthest without crashing, who can fall the longest distance without dying, who can freefall the farthest before pulling their ‘chute – and many other ways to risk your neck to try and be a top 3 finisher for GTA$ and RP rewards.”

“Heavily-armed squads face off across a neutral zone – with the goal of having all team members strategically penetrate their opponents territory to claim victory.”

“You’re part of a team tasked to deliver a priority vehicle rigged to explode if it drops below a minimum speed, while your opponents race, ram and batter to take it down.”