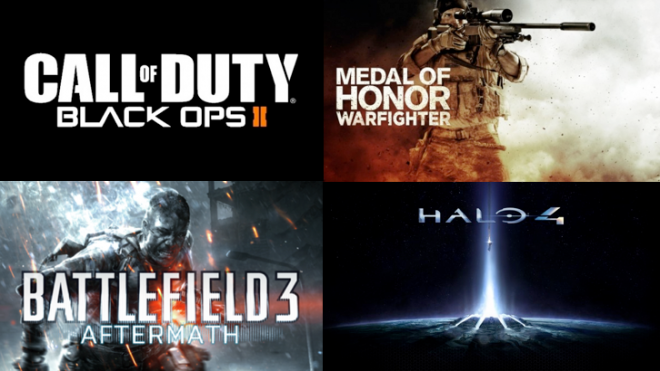 In the span of only a few days, FPS fans around the world were treated to four different launch trailers and cinematics of this year’s biggest line-up of shooters from Call of Duty and Battlefield to Medal of Honor and Halo.

Yep, it’s that time of year again when gamers with limited wallet sizes are spending their days and nights contemplating the tough decision they’ll be making ahead, or are simply dropping their entire life’s saving to pick up each and every shooter releasing in the coming months. To make things easier for the indecisive ones, developers are at least merciful enough to supply us with a more revealing look into their product in the form of a launch trailer, closer to release.

Too bad that these four killer trailers below are all mind-blowing.

So, we ask the question, since there can be only one: Which of these four launch trailers of your favorite, upcoming FPS games is truly the greatest?

Turn off the lights and turn up the volume as you take in the sights and sounds of today’s top first-person shooters.

Treyarch is Back in Black with Call of Duty: Black Ops 2 releasing this November 13th. You can’t go wrong with a little bit of classic rock n’ roll to go with your launch trailer. AC/DC supplies the beats while Mason and gang employ some near-future tech to stick it to the bad guys.

Be sure to check out our Black Ops 2 multiplayer preview.

Danger Close shows off Medal of Honor: Warfighter’s authentic, globe trotting multiplayer experience in this explosive launch trailer. Treat your eyes to some sleek and sexy Frostbite 2 visuals and prepare for deployment this October 23rd.

Don’t forget to read up on our Medal of Honor: Warfighter multiplayer preview.

While not quite a launch trailer, this Battlefield 3: Aftermath cinematic definitely deserves a spot in the line-up. DICE shakes up the Battlefield multiplayer experience this November/December with their fourth DLC to hit their latest militar shooter. Also powered by the Frostbite 2 engine, this trailer takes on a more cinematic approach as American and Russian soldiers fight for survival in a post-earthquake environment.

343 Industries goes big with producer David Fincher and director Tim Miller backing this Halo 4 launch trailer. Get a glimpse into the mind of Master Chief as he struggles to free himself from the captivity of an ancient evil. Battle against unknown alien threats and experience epic Spartan IV firefights in the highly anticipated multiplayer this November 6th.

You can learn the all latest on Halo 4 right here.

If you’re eyes and ears haven’t started bleeding, then you’ve successfully made it through some of the best launch trailers gaming has to offer. Now comes the time to let us know which trailer you think takes the cake.

Vote above and scream your winner in the comments below. We want to know! Also, don’t forget to drop your vote on the right-hand side bar to let us know which shooter you’re picking up this fall!