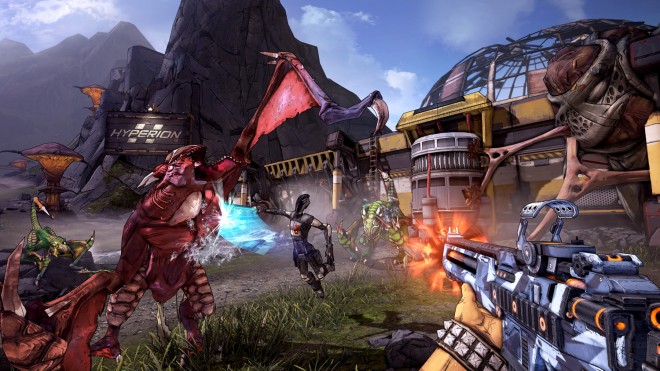 With Gearbox Software’s highly anticipated FPS RPG Borderlands 2 nearing it’s release date, a new trailer has been released that goes over the basics of what’s new and what people should be expect in this new installment of the Borderland series.

In this video, Sir Hammerlock serves as your survival guide for new and old players of the Borderlands games. Here we get a glimpses of the new terrain including futuristic cities, freezing wastelands, highlands and many more breath-taking scenes that we get to explore this time on planet Pandora. We also get a brief explanation and look at the new bad ass system that awards you for daring and exciting deeds.

It’s time to take some notes from Sir Hammerlock himself on what we can expect this time on the planet of Pandora:

Don’t forget to pre-order Borderlands 2 for exclusive goodies, like the Creature Slaughter Dome which can only be obtained by pre-ordering the game at your local Gamestop. Additionally, it included a free upgrade to the Premium Club, which you  gives a free token to download the 5th playable character, the Mechromancer, set to be released 60-90 days after Borderlands 2 initial release date.

Also if you’re looking to get the most of out of your Pandora adventure on Borderlands 2, read here to learn about the Borderlands 2 Season Pass.

Borderlands 2 is set to release on September 18th for the North America region and September 21th internationally on PC, PS3 and Xbox 360.