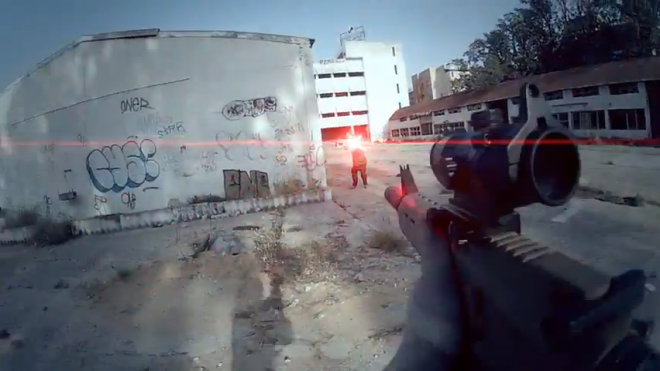 There’s been a lot of buzz lately about Ingress, Google’s latest foray into online social networking.  Instead of focusing on creating another facebook, Ingress is Google’s attempt at using that massive pile of data they’ve been collecting about us to use in a way that hasn’t really been done before, in an augmented reality game.  Foursquare, it seems, was just the beginning.

Now, because I haven’t gotten a precious invite to play Ingress yet, I can’t objectively review it.  If you’re interested in an in depth review, check this article out.  What I can say, however, is that people like Ingress, a lot.  Everyone I know that has played it, gamer and non-gamer, has gotten sucked into it in no time.  Given Ingress’s growing popularity, it can be assumed that Google is going to step it up in the future and combine Ingress with Google Glasses

If this BF3-inspired fan film is proof of anything it’s that people are on the augmented reality bandwagon.  The possibilities are endless when the entire world becomes the virtual battlefield.  To me, I’d much rather be out shooting terrorists in the streets of my city than be stuck in some nondescript desert..  That’s a big part of what has made today’s shooters so fun.  It used to be that shooting games were chiefly played on maps in outer space or some dungeon under a fictional castle.  Now we have games like COD bringing the fight to our front door and BF3 turning urban environments into war zones.  Given our desire to live dangerously in the safety of our own homes and cities, I think it’s a given that gaming is going to evolve to envelope the very world we live in.   Assuming technology can keep up with our dreams of taking down bad guys in our own backyard, it’s just a matter of time before augmented reality games are the big ticket item selling out in minutes on the night of release.

Obviously, people running around pointing air guns at thin air and scaring the crap out of everyone around them is probably going to be a roadblock for something like BF5 on Google Glasses, but given the level of immersion and possibilities for game-play and advertising, to me at least, it can’t not happen.  We’re starting to hit the limits of current gaming hardware (PCs, consoles, etc) and while there’s obviously a lot of progress to be made with what we have now, the stuff of the future looks way cooler than anything we have now.

Rumor has it, Microsoft will also be dabbling in Augmented Reality with the next Xbox and Kinect 2.0.

What do you think?  Does augmented reality seem like the next “big thing” in gaming?  Are you excited to see what it can bring to the table?  Or do you think real-world limitations are going to force things like BF5 on Google Glasses into obscurity?  Let us know in the comments!