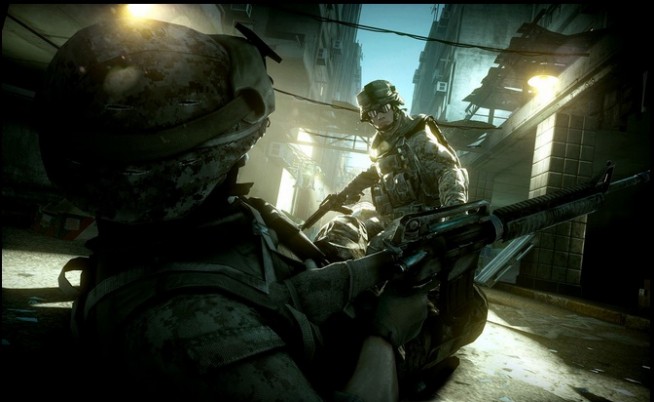 Your first unlocked stage is called Operation Exodus, which places you into an US camp where several enemy POWs are being detained. Your mission: defend the base until all personnel have been evacuated. At first, it starts off slow when an enemy scout is spotted far off on the horizon. Suddenly, action erupts as a wave of enemies race non-stop towards your team. You need to destroy vehicles, spot enemies, and protect Humvees as your cover is being chipped away by bullets flying past your position. It gets loud, insane and extremely fun as they attempt to break your defensive line.

Keeping your teammate alive is vital in this game mode. If your partner is “downed”, you are given a prompt to revive him by holding a button till his health is restored. If your teammate dies or you fail the mission, the game ends and you have to start over. There are no checkpoints in co-op, which makes beating each level very rewarding. This quickly forces each player to communicate and work as a team, since it is impossible to win on your own. Communication between teammates is the only way to succeed, so having a headset is almost a must. If you don’t have a headset you can still spot your enemies for your teammate, which places an orange dot over the enemy. Also if you don’t have a partner to start with, there is an option of starting the mode as public and have someone join your game.

Once you have completed a mission, your stats are saved on Battlelog where you can compare co-op stats, leaderboards and unlocks. Your combined points during each mission also go towards your co-op specific multiplayer unlock, which just like in multiplayer, can take thousands of points to unlock.

As much fun as this mode is, it does has a few flaws. After retrying a few rounds, the waves of enemies predictably crowded into the same area, so it was easy to plan ahead. Eventually mission success would be based on remembering what to do in each scripted situation. Vehicles are touched upon in this mode, but can severely handicap you since you can’t choose which position you will be assigned. Which can lead to a frustrating death mere seconds after starting the stage. Also there is no split screen available and co-op can only be played online.

Battlefield 3’s co-op is not perfect. However, the fun I had with friends made me overlook the flaws. It is simply a short but fun distraction from Battlefield 3’s main draw, the massive online multiplayer.