Borderlands 2 is the sequel to the critically acclaimed 2009 breakout hit Borderlands. Set five years after the events of the original game, Borderlands 2 returns to the planet of Pandora and adds all-new characters, skills, environments, missions weapons, loot and more.

For those veteran vault hunters all the way to those on the fence, I will cover everything you need to know about Borderlands 2 in this in-depth review.

As mentioned above, Borderlands 2 is set five year after the events of the original Borderlands game. In Borderlands 2 the new Hyperion president, Handsome Jack, has taken over the gun manufacture and is hell bent on opening this new found vault. He plans to do so by the means of harvesting the powers of Eridium, a powerful alien resource that has been spread all over the planet of Pandora thanks to the events of the previous game.

When you first boot up the game, you are greeted by a story from the familiar voice of Marcus, the gun dealer on the planet of Pandora.  He briefly covers the events of the first game where our four vault hunter heroes (Brick, Lillith, Mordercai and Roland) discover the vault on Pandora and destroy the creature that emerged from within once it was awoken from it’s imprisonment. Afterwards, you’re taken to a cut scene that takes place in the snowy mountains of Pandora in which we see the our four new vault hunter heroes (Salvadore, Maya, Zer0 and Axton) being ambushed during their train ride by Hyperion robot forces. They successfully manage to defeat them all, but only to be greeted by a Handsome Jack figure that’s been rigged with bombs, causing a big yet beautiful explosion. 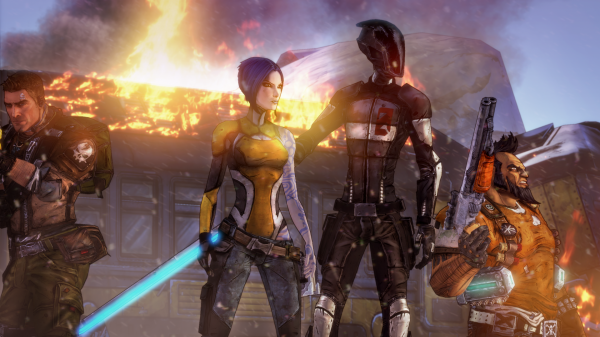 Once our heroes awaken after being knocked unconscious from the train bomb, we meet our first NPC, the lovable and hilariously annoying robot named Claptrap. He is pleased that a vault hunter has survived the trap that Handsome Jack has set up for any vault hunter that steps foot on Pandora. Handsome Jack sees any vault hunter as a threat to his plans regarding the new found vault and wants to kill them all.

Claptrap gives you a brief rundown of the controls and movements of  Borderlands 2, which he jokingly says your ability to walk short distances will be the down fall of Handsome Jack. Thus starts our new adventure on the planet of Pandora – saving it from the clutches of the evil Handsome Jack and his robotic minions. 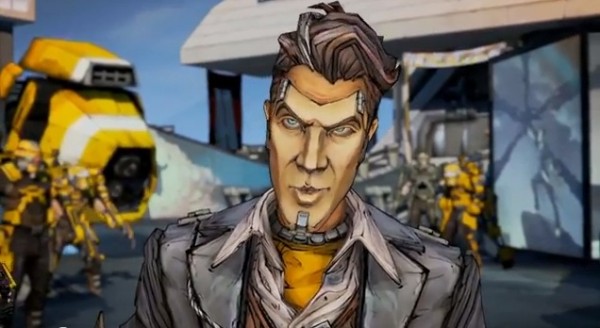 Keeping the same formula of the original Borderlands and successfully expanding in every aspect, Borderlands 2 delivers on it’s promise on being better, bigger and badder then it’s predecessor in every way. One of the most noticeable improved aspects from the original game is how fluid Borderlands 2 runs and feels with multiple hordes of enemies on screen at once without sacrificing an ounce of what made the original fun and addicting for everyone. This, and the wonderful writing sucks you into the world of Pandora, making you feel that the planet is really alive this time around.

I can personally say that the folks over at Gearbox managed to make Borderlands 2 much more addicting and satisfying then the original Borderlands. Quests are bigger, better and feel much more original and unique from one another. The delivery quest, which was a huge issue with the first Borderlands, was plagued with quests that felt exactly the same from one to another. Thankfully, due to all the original quest found in Borderlands 2, they can easily make one playthrough of the game last up to 50 hours just to complete. 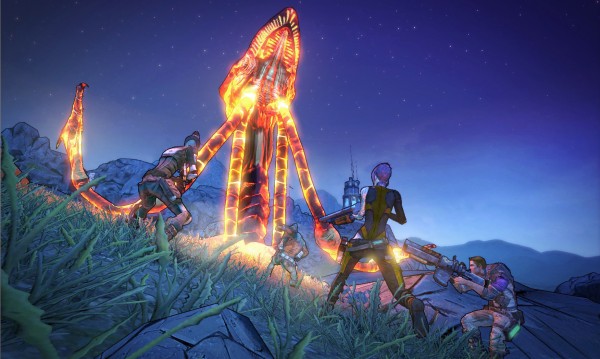 That’s not all. Luckily for us who want to get the most out of our purchases, Borderlands 2 includes multiple end-game bosses that can only be fought once the game is completed and once a player has reached the level cap of 50. This is possible by either by doing quests to fight these incredible foes, or having them pop up randomly to keep you on your toes. If you wish to re-fight the massive amount of bosses found in the main quest, you can by simply re-entering their location.

Finally, Borderlands 2 has polished the combat system by adding a new game mechanic known as the ‘Bad-Ass’ system, which is essentially a set of challenges that can be completed which gives your character small buffs on any stats that you so please. These can also be given to all characters in your profile and are permanent, but can easily be turned off by a touch of a button if you wish to not include these small buffs to all of your characters. This includes making acquiring items such as ammo and money much easier to pick up by simply just passing over it.

For a game that includes millions and millions of different weapons, one would expect the player customization to be rather lacking just like in the first Borderlands. Thankfully this isn’t the case for Borderlands 2. Gearbox has made it possible for players to switch the heads of their vault hunter to something different, but it doesn’t stop there. There are also options to switch the colors of your costume to ensure that you won’t ever look like any other vault hunter you may encounter online. If you’re worrying about a limited selection for both head/skins, fear not, currently, there are 17 different heads for each character and 88 skins in total.

These can all be unlocked through various means, such as winning them from the slot machines, enemies dropping them or you completing a Bad Ass challenge that nets you an item that can customize your character. You can also even earn certain faces that will make you look like certain bosses from the game once you have defeated them. 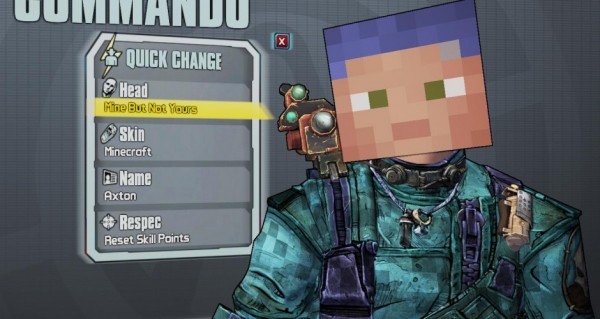 The Commando with a customized Minecraft head

Taking a page from the first Borderlands game, Borderlands 2 is also playable with four people online or with a buddy of yours via split-screen to stop the Hyperion president Handsome Jack.  To accommodate the added players, the creatures of Pandora will also become tougher to present a better challenge. But since the creatures themselves are much tougher, they will also drop better loot. The tougher they are, the better the chances players have to obtain rare loot, which vastly adds to the Borderlands 2 experience.

To add to this experience, matchmaking in Borderlands 2 is superb thanks to the added ability of seeing anyone on your friend list who’s currently playing Borderlands 2 and to easily join them with the press of a button. Also, having the ability to see if the game your joining is right for you due to the new symbols that let you know if you should or shouldn’t join your friend’s or a random person’s game is a nice addition. For example, a red skull appears near the player’s name in the match making menu indicating that one of you are ahead of another in the main story line or are much higher leveled up. A caution sign implies that you will have some difficulty in dealing with the monsters in the host’s game. Finally the last symbol, a green check, indicates that you and the host of the game are near the same level or are evenly progressed in the story line.

With all the new features that improve on the multiplayer aspect of Borderlands 2, the fans of the arena mode in the original  Borderlands, saddened to know that is gone from Borderlands 2. Thankfully the ability to duel another player 1 on 1 is still there.

Some people might have different opinions on the cell shaded art style of the Borderlands series, especially after the original one due to the game’s locales taking place in a boring and uninteresting desert area. However, just like the other aspects of Borderlands 2, it improves vastly in the visuals department from the original. Beautiful maps and vibrant scenery such as the caustic caverns, an abandoned mine site that’s been covered in acid, which really shows off the beauty of the cell shaded art style, really show off the talent of the Gearbox artists. Another must-see beautiful area in the game is the Eridum Blight, a volcanic area that’s over flowing with lava and Eridum. You’ll easily be drawn into travelling around the area just to take in the beauty. 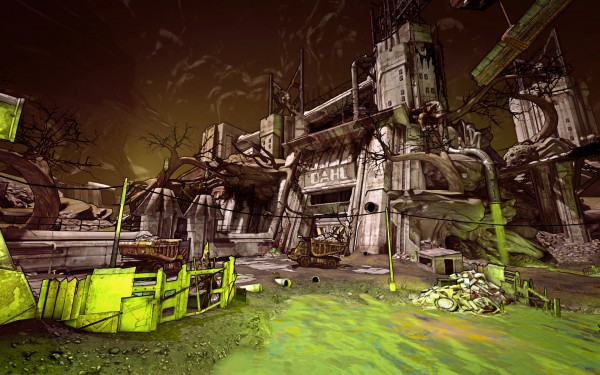 The improvement of the scenery is not the only thing that’s a step up from the original Borderlands. The guns and character models have also been reworked and look more colorful and sharper then ever. Speaking of the guns in this game, you will be pleased to know that each gun now has better distinction from another. Each gun manufacture is noticeably differently this time around. For example, the Jackobs gun manufacturer not only specializes in very powerful weapons, but as well being inspired by the old wild wild west gun design. The Vladof manufacturer, on the other hand, has the distinct feature of having double or even triple barrels on their guns, including pistols and snipers.

But, the guns that really stand out visually are the new, powerful E-tech guns. These E-tech guns are rare weapons that the weapons manufacturers of Borderlands created who essentially borrowed the technology that the Eridium civilization created for their weapons before them and incorporated it into their own product line. This makes for very interesting combinations, visually.

Aside from the minor issues within the game like the small texture pop-up, it can be easily ignored thanks to the stunning visuals that Borderlands 2 features. Another problem that Borderlands 2 contains is the occasional boss covering an item that they dropped after they met their demise with their dead carcass. Aside from these two small issues, I’m honestly impressed with all the work the Gearbox team accomplished with Borderlands 2, especially visually. This is definitely a big step up from the original Borderlands. I was especially pleased with how the team managed to make planet of Pandora feel much more lively. NPCs found around the world interact with you more and deliver fun and random quests as well as lines such as a Pandorian gloating about beating Crawmermax who happens to be the toughest boss in the original Borderlands – with just his pinky toe. Also, the addition of memorable characters such as Tiny Tina, the 13 year old who’s gifted in the art of demolitions clashing with the cast of the original game like Claptrap, our annoying yet funny robot companion, are a great addition. 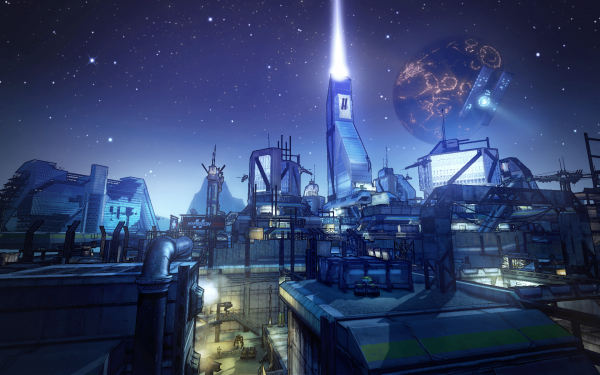 Over all, Borderlands 2 is a huge step up from the original in every way possible. It builds on the near perfect game and makes itself  easily a favorite contender to win the Game Of The Year award. So, if you enjoy RPG or FPS games and are looking for something with vast amounts things to do, feel free to pick up Borderlands 2 on the gaming platform of your choice. It delivers the most bang for your buck out of the recently released games this gen and will be sure to occupy you for months thanks to it’s 50+ hours of gameplay that can be played again in the new True Vault Hunter mode which adds an increase difficulty to the game.

If you think that’s more than enough to keep you busy, Borderlands 2 is slated to receive four massive DLC expansion packs that are set to be released by June 2013, including a fifth playable class the, Mechromancer, incoming next month.

Had a chance to sink some hours into Borderlands 2 yourself? Let us know what you think in the comments below!

Borderlands 3 In The Works, According To Lead Writer

Borderlands 3 In The Works, According To Lead Writer