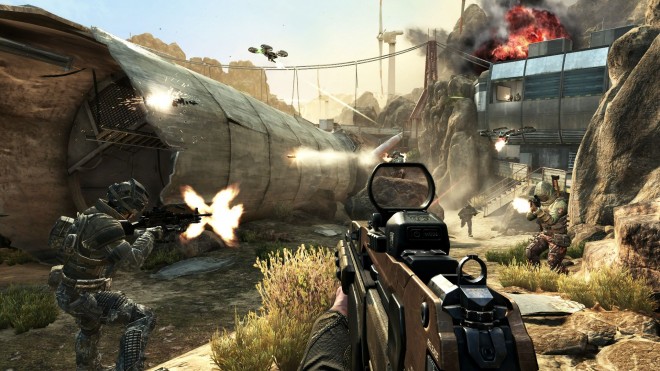 So, what’s the deal with Call of Duty’s lag?

Recently, lag compensation has become a huge point of contention for Call of Duty players.  Essentially, lag compensation, or lag comp for short, is the collection of coding and software that averages out everybody’s connections in a lobby.  It’s what makes gunfights fair, it’s what keeps your character in sync with how you control it, and it’s essentially the reason these games are even playable.  Black Ops 1 was the first time that COD players really came face to face with “bad” lag comp.  Most people pointed at Treyarch and asked “WHY DID YOU SCREW THIS UP!?”  After all, aside from it’s balance issues, MW2 was (and probably still is) by far the smoothest running COD ever released.  Every shot seemed to count in MW2 and dying was a matter of who shot first, not who lag comp was working for or against.  Why didn’t BO1 play in the same way?  The answer to why BO1 saw such a departure from MW2’s “lag quality” in my opinion has less to do with anything Treyarch did regarding lag comp than it does with the game itself.  BO1 was designed with a lot of extra features that had never been in a COD game before.  Dynamic stat tracking/aggregation, theater mode, split-screen support, custom emblem creation, and interactive maps were all a relative first for COD and BO1 made them a reality.  The way I see it, BO1 is physically moving more data from your Xbox, for example, to the host’s Xbox to Activision’s servers and back again.  Because COD is designed to run on outdated hardware (current-gen consoles) and has an engine that’s essentially aged its way into obsolescence (no amount of “updating” can overhaul a game engine enough to keep it current), I think BO1, MW3, and BOII all push the hardware beyond it’s capacity.  Blacklight Retribution, for instance, plays very well and most of the weapons have nearly the same TTK (time to kill) of COD weapons.  BLR was designed exclusively for PCs.  In fact, most well made PC games play better on PC than on consoles (BF3 anyone?), not just graphically, but in almost every way imaginable.  It’s not that consoles are inherently bad, it’s just that the ones we have sitting in our living rooms are so old they’ve reached the limits of their potential.

While I agree that COD should be optimized to run exactly as it should for all systems, it’s obvious that it doesn’t.  Between the lopsided list of issues for BOII on the PS3 vs the Xbox and how many gunfights most players on both systems are losing when they shouldn’t, it’s wholly apparent that something isn’t right with the optimization of BOII.  But it’s not just BOII, it’s MW3 and BO1 too.

So what’s the solution?

Disable theater mode.  Having the host of every game recording all the player data in addition to acting as the pipe between all the players in a lobby and Activision’s servers is only hurting the optimization of the game.  The end result is a game that despite being easily the most well polished, thoughtfully designed, and arguably well executed being totally ruined by an inconsistent and frustrating experience.  As much as we all love theater mode, every COD since it’s implementation has suffered from spotty hit detection, bad host selection, and sometimes unreliable-matchmaking to name a few things.

The other, and probably more pleasing solution is to wait for the next gen consoles to debut.  With their extra horsepower they should be more than capable of handling the processing that the current hardware struggles to keep up with.

What are your thoughts?  Let us know in the comments!