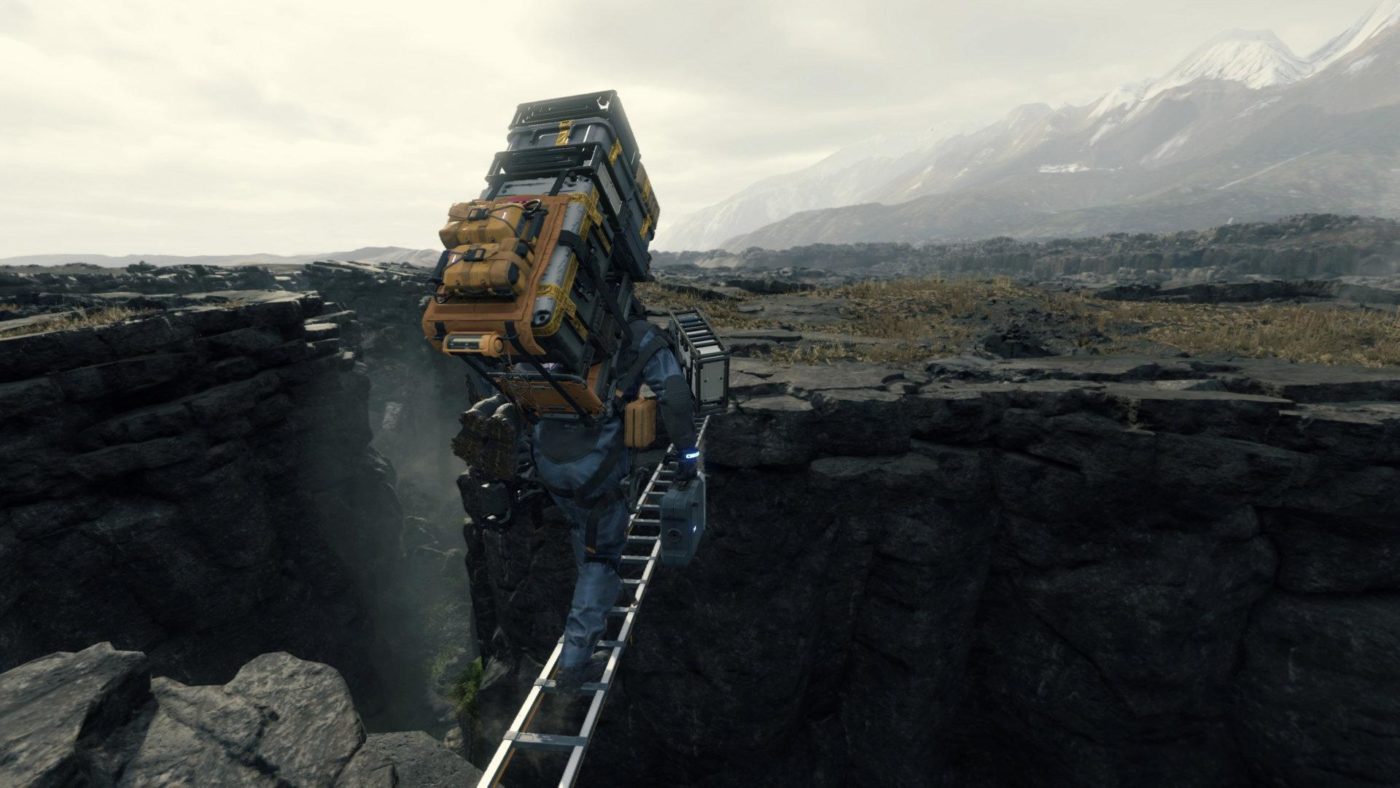 Alone, on a snow-covered mountain top, Sam trudges his way through a whiteout. With near-zero visibility and only the pulse of his Odradek scanner to briefly give him a glimpse of the terrain, being outside of the Chiral Network, Death Stranding’s version of the internet, getting to your destination can be harrowing. Once you reach your destination and make the required delivery, you can use your Q-pid (basically a USB that provides areas with connection to wi-fi) to connect the recipient into the Chiral Network. And this is where the true brilliance of the game comes through.

Once connected, you see the impact being connected online — the actual internet — opens up Death Stranding’s post-apocalyptic America to other players in all manner of ways and they are all helpful and encouraging. Once you connect an area to the Chiral Network the game allows you to see other players’ structures, signs, ladders, climbing ropes, post office boxes to drop off packages other players dropped, even vehicles to help you get around faster and the roads they’ve built to drive on.

Every single aspect of the online connectivity is meant to assist others as well as yourself. That above whiteout scenario that I described. That was my experience. As soon as I connected the NPC to the Chiral Network, I saw someone had constructed a safe house where I could stay to recharge my batteries. And I don’t mean this metaphorically, either. As you progress in the game you get more and more tools to help you make the job easier and that includes exoskeleton legs that carry more weight or all-terrain “legs” that let you travel better over various surfaces and these have batteries that drain through use. Seeing a safe house or a charging station that another player has set up in just the right spot offers the kind of relief usually reserved for shortcuts in a From Software game.

Even signs in the game have benefits. Passing through certain signs restores your stamina. So you might find these signs at the top of a steep hill where you had to use your stamina to keep from falling over. On highways, the speed up sign gives you, well, a speed boost. Other signs give you bonus “likes.”

Speaking of which, the more “likes” you get and give will connect you to more player structures in the world. At one point in the game I had to make a trek back to Lake Knot City, the main hub city for the second half of the game and I was dreading it because it was a long way to go, with a few MULE camps (MULES are NPC enemies addicted to stealing cargo who can be a royal pain in the ass if you don’t have the weapons to deal with them), and a whole lot of Timefall (the time advancing inclement weather of the game which ruins your cargo if not sprayed down with repair spray, each can of which takes up valuable cargo space), and with Timefall comes BT (Beached Things) which are the enemies from the other side that drag you into mini-boss fights if you can’t escape them. Timefall Shelters felt rarer, however, they were always helpful as the emitted the repair spray and you could pass the time in them to wait out the Timefall.

I can’t even properly describe the elation I had when I saw that the find people also playing the game in my instance created a road that leads from the Distribution Center I was at which lead all the way back to Lake Knot City. I loaded up a truck that had long-distance capabilities with all of my cargo and off I went, using the “Speed Up” signs to drive right past the MULE camps, through the Timefall, missing the BT territories in the process, right into my destination. Now I can only imagine what that trek would have been like without the help of unseen friends and fellow porters.

Perhaps the most useful tool in the entire game would be the network of zip-lines on the snowy mountain tops. I had to add my own zip-line structure to a few which means anyone else in our instance passing through the area afterward would have an even easier go of it. These zip-lines need to be within 300 meters of another zip-line structure to be used, but finding a perfect spot and a series of them can make traversal and hazards such as Timefall, BT, MULES, Terrorists (yes, this game also has terrorist enemies that will kill you) completely negligible and making your experience even better. Something not possible if you’re playing offline or ignore other people’s structures.

While the bulk of Death Stranding has a feeling of being alone, the way it uses being connected to the internet and thusly- – other players — it creates a level of cooperation that I’ve never seen before in a game.  Sure, it’s easy to dismiss Death Stranding as a walking simulator if you’re being completely reductionist, but playing this game as intended you have so many options open to you via Kojima’s brilliant strand network, you will find that maybe other humans aren’t so bad and whiteouts in a video game aren’t as scary as it seems.