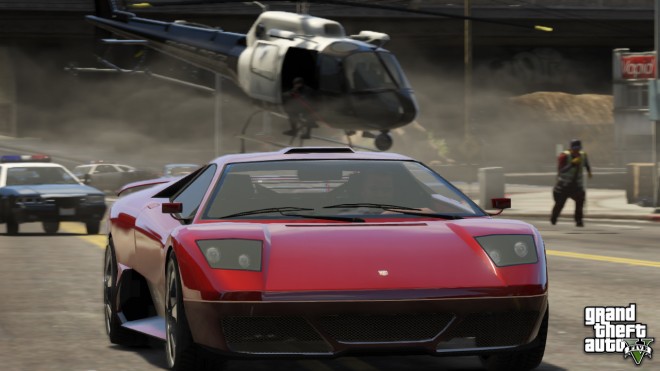 By now, everyone should know that Rockstar Games has been up to three important things in the month of October. First, they announced that Grand Theft Auto V will grace the cover (and be the featured article) of the December issue of Game Informer, on sale in November. Then, they launched the official Facebook fan page for GTA V. More recently, they have asked the community what they would like to see in GTA V’s multiplayer, in terms of the Crews feature.

In my opinion, this last part interests me more than the first two. Why? Well, we know that the December issue of GI will be big. Anyone who tries to argue this is a moron and should be slapped across the face. The Facebook fan page is for people to discuss and argue the game and post pictures and such, but involving the community in what they would like to see included is something that concerns me as well as makes me happy.

It makes me happy because I am a huge fan and believer in community involvement. I love when a game has a beta. This way, fans can sound off on what needs to be fixed, what should be tweaked… etc. I love when a developer asks the community as well for ideas because it shows they actually care about bettering their product.

But in this case, it makes me question how far along the multiplayer is. Is it complete and they are just wanting to make changes to the Crews as it is the newest feature? Or, is the multiplayer still being developed and Rockstar wants to get it right the first time? The third concern is a little bigger and is a valid one.

Why is this limited to only the Crews feature?

Granted, I enjoyed the variety of game modes from GTA IV, Red Dead Redemption and even Gang Wars from Max Payne 3, but there are many aspects outside of Crews that I think could be improved upon, including some very nice additions.

Here are my wants:

I would rather see how we can have Crews integrated into GTA V’s multiplayer. Red Dead Redemption’s Posse feature (which was the foundation for Crews) worked because, in the middle of the game, you could start a posse with any player in the room, but playing with your Crew gains you bonus XP and builds your Crew’s rep and such. So, I want to see how Crews can fit in. As for the little Rivals section, I think that Rockstar could take a page from Battlefield 3 with their Matches feature – set up via Social Club a match between your crew and another and set the day, time and game mode. It would be a great way to incentivize the competitive side of the game.

My biggest concern, however, is the multiplayer itself and Rockstar’s lack of security and countermeasures against those who use mods. I cannot tell you how frustrating GTA IV’s online mode was. People having industry table vehicles, shooting people with rockets from an SMG, the ability to lag players out – Red Dead Redemption wasn’t as bad, but Max Payne 3 had a ton of aimbots being used and Rockstar’s solution was to find and single out all cheaters and place them in servers with other cheaters. What needs to be happen is a tightening up of their security to stop this from happening. If there is an issue with cheaters, Rockstar can find who they are and ban them. It is that simple!

Gameplay wise, I really liked the choice of game modes from GTA IV. Cops and Crooks was my personal favorite. I also enjoyed the way in which Red Dead Redemption’s multiplayer was set up. It was a free roam session and you could start a competitive mode by going to a marked site where other players would be alerted to you wanting to play. That said, I really enjoyed the co-op style modes that Red Dead offered, such as clearing out gang strongholds. I would truly love to see that brought into GTA V’s multiplayer as well as other co-op game modes. This would truly help build the Crews aspect by having Crews work together in these modes. I would also like to see a bit more customization for your character – to the extent of Max Payne 3’s customization for your avatar.

So there you have it! That’s my wants for GTA V multiplayer. What are yours?

This editorial appears on MP1st as seen on Lizzy’s blog.