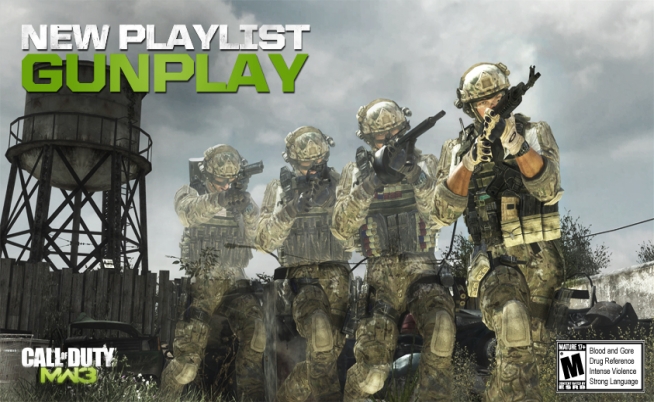 Last month, Infinty Ward introduced the newest community playlist called “Gunplay Playlist,” which features several Free For All variations. Unlike One in the Chamber and Gun Game, the Call of Duty community was for the first time treated to All or Nothing. You can learn the rules of all the game types in Gunplay here.

When players get into any All or Nothing match, the loadout, BoxOfDemons, has to be selected in order to proceed. This gamertag/PSN ID is featured in All or Nothing as a tribute to the game type’s creator who goes by the gamertag BoxofDemons.

We recently learned Devan, aka BoxofDemons, has been an MP1st reader for quite a while, so we had the opportunity to pick his brain about All or Nothing. He also released his first YouTube video that you can watch below.

Fahed Jaradat: Let me start by thanking you for a great game type that I hope will live on in one form or another in future CoD titles. The combination of using scavenger as the first perk to unlock and having to load your gun after getting the first kill is brilliant. Overall, All or Nothing is one of the best FFA variations I have ever played.

FJ: How does it feel to have left your mark, to an extent, in CoD history?
BoxOfDemons: It feels absolutely amazing! I never thought All or Nothing would get anywhere. This is, as far as I know, the first time they have added in a community made game mode and it feels great to be the first.

FJ: Any advice on button layout? I use tactical, but I’m not sure it’s best for AoN.
BoD: I’ve always used the default layout and have heard some people saying it’s difficult on tactical. I’d say stick to default for AoN unless you can get a few kills with the knife on tactical and the USP .45 is your only concern.

FJ: Why did you pick Dome, Mission, and Hardhat? Or was it Infinity Ward who picked those?
BoD: It wasn’t my idea to limit AoN to these maps. I really enjoyed playing AoN on maps like Arkaden that way you have a little more room to play and you can expand above a 10 player limit. I did not, however, play on maps like Bakaara that have the mounted guns. If Infinity Ward decides to use more maps, or if they add AoN as its’ own mode, they could easily remove the mounted guns and raise the player limit.

FJ: What other game types do you enjoy in Modern Warfare 3? What other MP games do you enjoy?
BoD: I have been playing a lot of domination and kill confirmed. I also am addicted to playing infected in private matches where I do things such as setting humans to be juggernauts and having the infected have C4 and RPGs. When it comes to other multiplayer games I really don’t have a lot of others that I play. I got MW3 and BF3 for Christmas and at first I was addicted to BF3 and that’s all I played until probably the end of January. After BF3 I popped in MW3 and became even more addicted to it, mainly for it’s “pick up and play” style. Now that I am recognized in MW3 I would feel like a traitor if I even put BF3 into my Xbox.

FJ: Did Infinity Ward send a care package for using your creation?
BoD: They didn’t compensate me in any form besides in-game recognition. I was talking to some IW members yesterday and, jokingly, we have come to an agreement that it would only be fair if they mailed me hand-drawn pictures of ponies. If I get those drawings I’ll be glad to show you.

FJ: Are you happy with MW3’s spawn logic? Does it work for AoN?
BoD: The spawn logic is just horrible for the FFA Gunplay modes. This is especially true for Dome. It gets very frustrating when you spawn 2 inches in front of somebody on OIC. When playing All or Nothing it is still frustrating but obviously not as big of a deal. Mission and Hardhat are rarely a problem on AoN.

PSN Down for Maintenance on April 16th for About 13 Hours