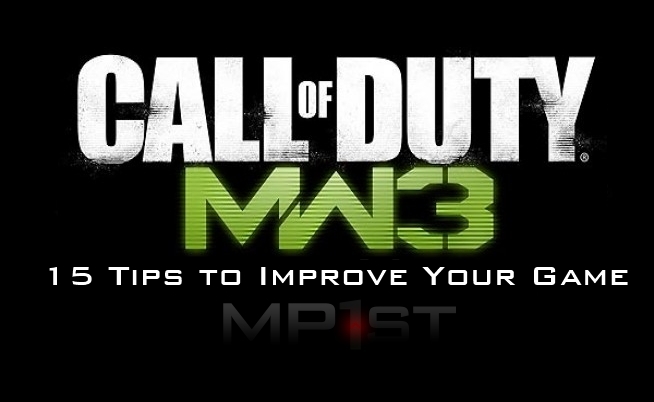 It’s more accurate than you think, especially with steady aim. Of course, we don’t recommend this for every engagement, but it saves a lot of time in close quarter engagements when aiming down sight isn’t needed. It is also a great idea to master firing into aiming. Think “fire and aim at the same time,” rather than “first aim, then fire.”

2. Pre-fire around corners.
If you can tell someone is lurking behind a nearby corner, either by way of sound whoring, visually seeing them hide there, or through the mini-map, start firing as your turning that corner, especially if you have an automatic weapon. Even if your aim isn’t perfect, a bullet or two might hit, causing them to flinch, increasing you chances of winning the engagement. Greatly recommended in conjunction with hip firing.

3. Know your limits. Pick your pointstreaks accordingly.
Don’t waste time shooting for that 17 pointstreak in the Assault Strike Package if you’re only hoping to get there by way of luck. You’re much better off sticking to rewards you know you can achieve. Also, try the Support Strike Package if you’re new to the game, are maybe just having a rough day, or trying to help out your teammates.

4. Shoot while drop-shotting, a technique used by many players who run with the tactical button layout.
Much like our hip-fire tip, think of dropping and firing at the same time, rather than dropping first, then firing. Keep in mind, this mechanic isn’t as effective as it used to be in other Call of Duties.

5. Hover your thumb over the ‘knife’ button while reloading.
Again, for those using tactical button layout, consider keeping that thumb ready to knife while reloading either to cancel your reload, or to get out of sticky situations.

6. Consider using the Stinger as a secondary.
It takes care of air support very nicely and hopefully negates the need to use the Assassin perk. Also, remember that destroying air support earn you points, points which now count towards your strike package rewards.

7. If using a semi-auto weapon as a primary, use a full-auto as a secondary. Having a balanced loadout is key.

8. Kill the gun pull-out animation.
Immediately after spawning, if using machine pistols (e.g. the infamous akimbo FMGs), switch to secondary to bypass slow switch animation for later firefights. It goes without saying that, at the moment, dual FMGs are the most powerful secondaries in the game. It also applies to the Overkill perk.

9. Leave enemy care packages alone.
We suggest that it’s not worth it, especially in game types like FFA where the Support Strike Package is often used. Otherwise, if it’s a juicy reward, camp it to wait and see if the enemy comes back for it. If after a few seconds they do not show up, it might be best to move on.

10. This game is not like MW2.
Don’t rely too much on your mini-map. Focus on what you can see. Of course, this is down to the fact that many players are running the Assassin perk.

11. Stick to the outsides of the maps.
This should reduce number of sight lines, and there are many in this game. This, of course, will also allow you to flank the enemy. It is an extremely good idea in FFA where you could be shot form anywhere and any angle.

12. How to level up fast in Modern Warfare 3.
Kill confirmed+Specialist Strike Package+Hardline Pro=Muchos points. After your 6th kill (5th with Hardline Pro), you should start racking up some sweet bonus points for every kill thereafter. Remember to also keep confirming and denying those kills. Those too will help you level up quickly with this setup.

13. Get creative with cover.
There’s not a whole lot in Modern Warfare 3 compared to past titles. You may have to think outside to box to find yourself some good cover on these maps. Don’t forget to duck to cover when needed.

14. Don’t run, walk around corners.
If you are unsure of what awaits around a corner, sometimes its best to calmly walk than to get caught of guard running. Again, if you do know someone is there, walking while pre-firing might be a great idea.

15. One thing to always keep in mind. Try to minimize lines of sight.
Also, memorize the spawn points on each maps and when the spawns tend to flip.

Of course, these our just our tips. Let’s hear your tips in the comment section below!

Also, check out our 15 tips for Battlefield 3!

BF3 – Changes to Semi-automatic Weapons On The Way