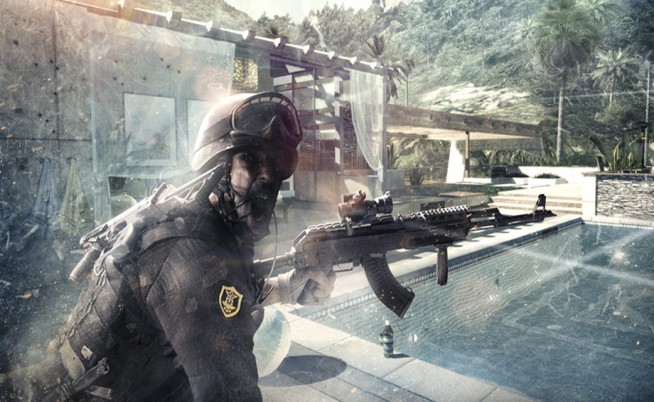 Yesterday, the minds behind Modern Warfare 3’s DLC gave Xbox 360 ELITE users the May DLC drops a week before the scheduled Collection 2 release. Since most of this will be packed into that Collection bundle, I’ll review these drops in case you’re wondering if it’s worth picking up or not. I’ll also get into details regarding the brand new Face Off mode and let you know what I think of it and determine whether or not it is a waste of your time and money.

Sanctuary is an absolutely beautiful map. The Inner Circle takes on the SAS here on this Greek, cliff-side monastery. This is one of my personal favorite DLC maps for Modern Warfare 3 because of the different styles of play you can master on it. There are tight corridors for you SMG/Shotgun lovers, and there are also long and vertical sight lines for the snipers and assault rifle users. The map is a pretty decent size, but after a play-through or two you’ll pretty much remember most of the layouts. You’ll manage success when you plan your routes carefully and don’t run around like a maniac. My personal preference on this map is sticking to the outside routes. That way, nobody can sneak up behind you and you have a clear sight of what’s around you.

On this cement factory map in Korea, the Spetsnaz take on Delta. The key to success here is holding down the vertical spots as well as maintaining the outsides of the map, as those routes count for some good flanking action. Although there’s two ways up to the catwalk over-looking the entire map, this area is deadly for those with good aim. I have never been a fan of vertical gameplay in Call of Duty games, it’s just a huge nest for window campers in most situations, but not here. You are fully exposed if you are up on this catwalk, so I’d advise you get the 2-3 kills you can possibly get then book it on out. Again, as always, stick to the outsides and avoid the rushes through the middle, unless you run with an SMG steady aim class. This map is not as good as Sanctuary is, but still much better than some previous map drops.

I have to applaud the team that made this map. Not only is the scenery gorgeous as you’re playing on beach resort, but the map itself applies to all play styles. There are tight corridors with medium-ranged sight lines for the assault rifle players and there are also long sight lines on the outsides for the snipers. This map does not preach vertical gameplay as I only noticed two spots on the entire map that have it, both with two ways up. This map is about the same size as Foundation if I had to give a comparison. The Inner Circle battle against Delta here, and I don’t know about you, but I’m about sick of hearing Makarov’s voice. Overall though, this is my most favorite multiplayer map out of the three in this collection.

Players going on the Killswitch mission will play in an all-new battlefield set in a Russian dockyard. You will have to pick between you and your partner, who will control overwatch with a sniper and who will patrol the ground with an MP5/SCAR combo. I had a chance to participate in both roles and playing as the sniper is some addicting fun. The sniper also controls a reaper once your partner arrives to the EMP building. The objective here was to clear out arriving backup so your partner can escape the building unscathed. After you escort your partner through the building in which he has to detonate an EMP, a chopper comes up to your nest and shoots you down. Once you both are on the ground after that sequence, everything is dark and gritty due to the EMP blast and you must fight your way to an escape boat on the dock, but you have to get past two juggernauts first. This mission takes about 6 to 8 minutes depending on your play style. I wish Infinity Ward would throw more of these Spec Ops missions into these collection packs. It’s definitely something I have fun with.

Ironclad is set after the Hamburg mission from the single player campaign with two players and features asynchronous combat, with one player clearing obstacles while the other engaging in combat from the gunner seat of a tank. Controlling the tank isn’t as cool as you may think, as you don’t see a HUD from inside the tank. You’re only the gunner, similar to how it was back in previous COD’s. The only control over the tank that you have is whether you choose to advance forward, or go backwards. You cannot free roam the tank and drive it where you please. It’s a on-rails gameplay. You get to shoot both the machine gun and cannons, clearing the battlefield allowing your partner to advance by blowing roadblocks with C4. You’ll have to overcome opposing tanks, helicopter’s, suicide bombers and guy’s with RPG’s. This mission on Veteran is much harder than Kill Switch was because of how many enemies you have to face. The other point of view from the ground infantryman isn’t anything we haven’t already seen. The main attraction here is being in that tank and causing havoc on the opposition.

The ELITE Face Off playlists are comprised of 1v1 and 2v2 gameplay. The 1v1 playlist is only Kill Confirmed and Team Deathmatch. The 2v2 playlist is a mixture of Team Deathmatch, Kill Confirmed, Team Defender, Domination, as well Search and Destroy. You cannot be in a party chat and play in these playlists. You are able to run private matches on the Face Off maps on any game mode.

Getaway is my most favorite map out of all of the Face Off maps. A little smaller than Lookout, it’s extremely fun for 1v1 action. It’s imperative to run Dead Silence here because of how loud your footsteps are on the wood flooring, as you may 1v1 a try-hard that likes to sound whore. There are multiple ways into the house and the swimming pool provides a unique scenario where you can actually commit suicide if you’re under water too long. If you see someone camping in the pool, toss a stun grenade at him. Since the water doesn’t stop it, it detonates anyways. Thanks for the realism Infinity Ward.

Lookout is an extremely dull looking map, it’s nothing but brown. Everywhere. I got to play a 2v2 here and although I was a skeptic of the Face-Off mode to begin with, it actually ran quite nicely. You may run into your share of campers, though. There’s a lot of ins-and-outs in this map and not too much cover. I found the key to this was honestly being aggressive. Watch your back though, since these maps are small. The spawn system will get you killed from time to time. Out of the four Face Off maps I played, Lookout and Getaway are the smallest.

Overall, with the price point at 1200 Microsoft Points, or $15 USD, you get these six pieces of content. Technically speaking, each piece is 200 Microsoft Points, or $2.50 USD. At that price point, it’s hard to argue with what you’re getting. The three multiplayer maps are better than some previous drops, the Face Off maps are great and can be used in private matches for bigger battles. The Spec Ops missions are also good value too. Infinity Ward can never go wrong with those. I believe this map pack is worth it for any avid Modern Warfare 3 player if you aren’t already an ELITE member.

Don’t forget to watch the gameplay previews in HD! Are you an ELITE member? What are your opinions on these DLC drops? Will you be purchasing this collection next week if you aren’t an ELITE member? Let us know in the comments below.

Black Ops II and Footstep Sounds – To Hear or Not To Hear?