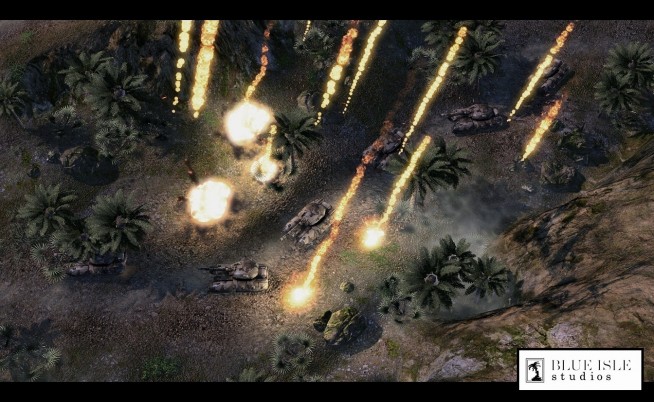 This is our second featured interview in a series focusing on independent developers producing multiplayer games for a variety of downloadable platforms and systems. Blue Isle Studios is a Canadian development team currently producing a full-conversion Starcraft II game entitled Subsistence. Subsistence is an original IP of Blue Isle’s, and features entirely original and unique art assets and features. While Subsistence will offer gamers a lengthy and authentic campaign experience, it will ship with multiplayer modes as well (both competitive and cooperative).

MP1st: What unique challenges does RTS game design offer that are not present in other genres? How have Blue Isle tackled these issues?

I think one of the largest challenges when designing an RTS is getting the right balance between pleasing the competitive gamers and the casual gamers. It’s incredibly tough to design a game that will make all types of players happy because everyone is looking for a different type of experience. If we look at the current crop of RTS’ out there, you’ll notice that they are tailored to appeal to one of the two groups. Starcraft II for example is a game tailored to competitive gamers. The devs at Blizzard have done a great job making the game user-friendly for the casual guys, but at its core, it is a serious, competitive game.

Here at Blue Isle we’ve tried to take a different approach. SC2 is the best competitive RTS game out there; no one can touch that. What we are instead trying to deliver is a great story-driven gameplay experience. So obviously there is the singleplayer mode and the online multiplayer modes. What we are doing differently, however, is our co-op mode. Our entire campaign has been designed from the ground up with co-operative play for up to four players at a time. What this means is you can play through our story-driven campaign with AI opponents and up to three of your friends (or strangers). It’s a unique twist on the RTS formula that combines the fast pace of a multiplayer game with the cinematic type of gameplay you’d find in a good singleplayer mission.

MP1st: How much in-house design and technology have Blue Isle had to incorporate and produce to bring your vision of Subsistence to fruition?

Luckily for us, Blizzard has provided everyone with an incredibly powerful toolset that allows us to create almost anything we want. There are always going to be engine limitations that we don’t expect, but every game developer in the world has to deal with this type of stuff.

What we have done, however, is use these tools to create a lot of new gameplay systems. We have a new pathing system where your armies will actually assemble into realistic looking formations when given a move order. We’ve modified the air combat systems quite a bit to allow jet fighters and bombers to move about realistically (instead of just hovering in place). We can actually have dogfights between jets in the game now, which just looks really cool.

On the graphical side of things we’ve made some changes as well. All units will fire projectiles, so infantry fire bright tracer rounds while tanks fire shells that can sometimes miss their targets. We’ve taken the lighting system one step further to show weather effects. Thunderstorms produce lightning strikes with a huge flash of bright white light, dynamically moving shadows all over the place; it’s a really cool effect in-game. All of this hopefully contributes to a really great, immersive game world.

MP1st: How do gameplay and story complement each other? In a game like Subsistence, is there an emphasis on one or the other?

I think gameplay and story really go hand-in-hand, and they both need each other. A game that plays great but with a poor story kind of leaves something to be desired. At the same time, a great story in a horrible game doesn’t really work. If you had to weigh the two in terms of importance, gameplay has to come first.

We’ll always design gameplay first and then add a story element on top of it. We could never remove something from the gameplay because the story doesn’t allow it, that’s not good game design. With that being said, we are doing our best to craft a really good storyline that drives our singleplayer and co-op campaigns. We kind of lucked out there – we were able to get a great writer to join our team and help out.

MP1st: Given the blessing/curse of a massive AAA studio and an unlimited budget, what kind of original IP/technology might Blue Isle produce?

We are independently funded, so being a small studio allows us a lot of freedom. We can pick and choose projects to work on as we please without the pressure of a big publisher forcing us down a certain path. If we wanted to create a game about space-pirates racing around in hovercrafts on the moon, because that sounds awesome, then we’ll do it. On the flip side, we have to be really careful when deciding on a project. Certain games are a lot more expensive to produce than others, so we are limited in that respect.

In our case we are working with a state of the art game engine that’s already designed for RTS games. This allows us to pour our budget into content creation instead of toolset creation. So our concept artist, 3d artists, animator, programmer, sound design, writer, that’s where our budget is spent. Subsistence is our first game but we have a hundred ideas for other types of games we would love to build. As for what else we might produce in the future, we don’t even know at this point. Goal number one is to finish this game, then we’ll look at other options! 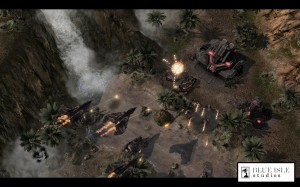 MP1st: What can we look forward to from Blue Isle? Will Subsistence be supported with new units or missions post-launch? Any other game ideas in the works?

I’m a big fan of free content. Actually, who isn’t? If you look at the success of companies like Valve, fans have an extreme loyalty to them because they show their customers respect. Free content is an awesome way to reward gamers, and a way to extend the shelf-life of your game. We definitely have plans to release a lot of free maps and maybe even some units after the launch of Subsistence that will really expand upon the game. There’s a ton of ideas for new game types that we really want to create.

On top of this we are planning to launch a number of fun, smaller games that will offer a bit more variety. The SC2 engine can be modified in a lot of neat ways. I’d personally love to do some type of go-kart racing game, that could be a lot of crazy fun.

Ultimately this all depends on the success of our initial launch. If we can do well enough to stay in the business of creating games, we’ll absolutely keep doing it. This is a real passion for the entire team and we hope it shows in our final product. We hope to launch Subsistence alongside Blizzard’s Starcraft II Marketplace sometime in the near future, so no release dates yet.

Thanks a lot for the opportunity!

Check out our first interview in this series with Gigatross Games!