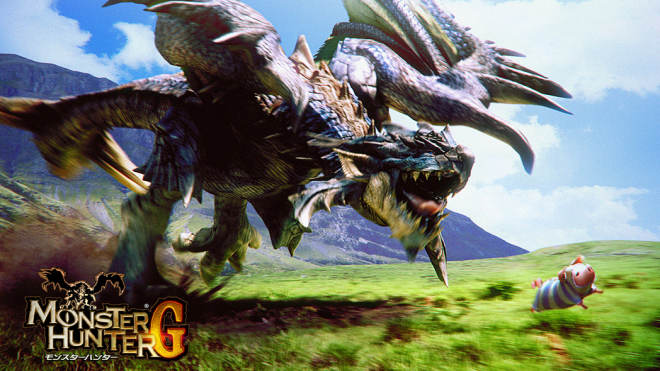 Another week of multiplayer gaming has passed and by now many of you are just finishing up those assignments for Battlefield or getting yet another prestige in Call of Duty. This week I decided to sit down and give my old PSP a wipe down and continue my long awaited journey back into the world of Monster Hunter. I wouldn’t be surprised if many of you haven’t even heard of this title, seeing that it hasn’t had a single release on PS3 or Xbox 360 outside of Japan.

What Is Monster Hunter?

I’ll be honest with you all, my first time playing the title, I absolutely hated it, as at the time, my learning curve was about the size of a pea. If there are any titles this generation of console that I can compare Monster Hunter to, then it’s the Soul series (I’ll discuss that in a later article). This is a title that is literally built on the idea of co-operative online play. Not that you can’t play and beat the game alone, it’s just far more entertaining when your gathering up three other players to go on an epic hunting quest.

The game doesn’t have a real story to it (unless you dig deep), but mainly, the main focus is just completing quest after quest and trying to earn new rewards such as armor or weapons. There are two types of quests: gathering and hunting. The gathering quests will have you traveling through the available worlds and your main focus is just to gather the requested items. At times though you’ll be required to slaughter a monster to get a specific item, but for the most par, you’ll be collecting herbs and monster hides. The hunting quests is where all the fun truly lies.

There’s just something about this title that makes it rather addicting and fun. The game is pretty easy when it comes to low-level monsters, but once it introduces buffed up versions of the younger monsters, or even bosses such as a Raven or a Tigerex, things quickly become a challenging, something that many games lack. Bosses are no easy task to take out, as many times, their attacks do near critical damage. You’ll most likely be bald by the end of your journey due to constant hair pulling, but at the end of the day, it’s all worth it.

Upon killing a monster you’ll have the chance to carve it. Depending on the location of where you are carving, you’ll be rewarded with different types of items. Example: carving near the tail of a raven or Ratholos may reward you with a tail item, while carving at the body would reward you with perhaps a bone, scale, or other items.These rewards can then be used at the blacksmith where you’ll be able to create new armor and weapons for your character. This is what it’s really about, as the game doesn’t have a leveling up system and is based on the fact of how good your gear is. That is why playing with friends is highly recommended, as it makes your journey a bit easier, but be warned, as the number of death each player can have decreases or rather becomes a single death pot. This meaning that the team will have in total, say, 5 deaths. If one player dies, then 4 deaths remain for the whole team. Not only that, but the carving is also built the same way, meaning if one player carves everything from a monster, then the other players will be out of luck. Though I can’t say this idea has been a bad one considering that most of the time your partners will leave you some to carve.

Here’s some co-op in action:

So again what is Monster Hunter? To sum it all up, it’s a fantasy role-playing game that sends players on quests to protect the local village from invading monsters. The gameplay is set as a third person, hack and slash, but the armor and weapon system works in level stages so that you may become stronger over time. It makes excellent use of co-operative play, which can support up to 4 players per quest. The game revolves around the idea that you must always hunt in order to survive this dangerous world.

What does Metal Gear Solid have anything to do with Monster Hunter? Well in a story sense, absolutely nothing, though that didn’t stop the guys at Kojima Production from teaming up with Capcom for this amazing cross-over. For those who own Metal Gear Solid: Peace Walker on either the PSP, PS3, or Xbox 360, you’ll be able to play this cross-over version of MGS and Monster Hunter right in the game as a special story mission that appears later on. It’s not a true Monster Hunter experience, but it is a rather fun Easter egg quest from two amazing franchises.

Anyway, if your someone who’s looking for something that isn’t a shooter, I highly suggest trying Monster Hunter out, as the co-op is an excellent system and encourages you to play online with others.

If you do want to give Monster Hunter a try, I suggest getting a PS Vita, PSP, or a Nintendo Wii as all these consoles have a playable Monster Hunter title that are available stateside.