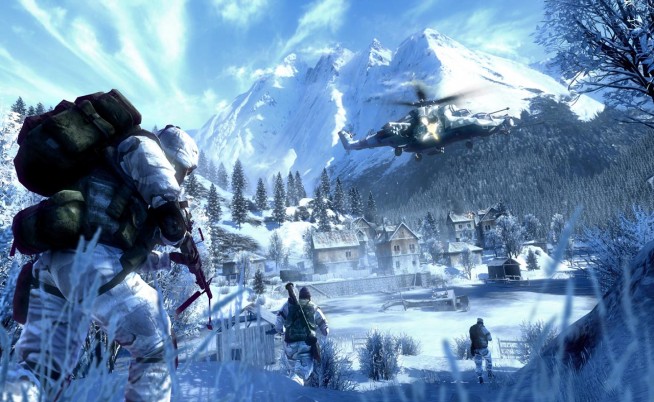 Why Are These Features Not In Battlefield 3? A Bad Company 2 Comparison

So I popped Battlefield: Bad Company 2 into my Xbox 360 last night for the first time since the release of the Battlefield 3. Much to my surprise, it doesn’t look aged one bit. In fact, I found just as much enjoyment, if not more, than when playing the latest instalment. It quickly became clear to me that Bad Company 2 still has some strengths that other shooters, including even Battlefield 3, have yet to surpass. What’s more, during my hour and a half or so play session, I found myself asking the question, “why isn’t this in Battlefield 3,” or, “why doesn’t Battlefield 3 do this better?”

While playing, I jotted down some quick notes listing things that I thought Battlefield 3 could have easily borrowed or carried over from Bad Company 2. After all, they were made by the same developer, right?

Now I’d like to make it clear that I am well aware Battlefield 3 is a direct sequel to Battlefield 2, not Bad Company 2. This means things, a lot of things, will and should be different, including the way the weapons and vehicles handle, gameplay mechanics as well as the general look and feel of the game. Things like adding more recoil to the weapons or limiting sniper rifles to one-hit-kills only in the head and upper chest at close range are decisions the developers at DICE have made that to differentiate the game from past titles. Also, destruction was made to play out differently to cater to the more urban environments of Battlefield 3. These are things that are, perhaps, more in line with the original Battlefield series or things that developers wanted to shake up for the sake of  keeping things fresh. The things I’m going to be nit-picking about here are little details and features in Bad Company 2 that I believe could have been translated to Battlefield 3 easily and that I think would have simply added to the gameplay, thus augmenting it into a better FPS in general.

So, let’s get started.

Admit it. Matches in both Bad Company 2 and Battlefield 3 can be some of the most epic and intense moments that you will ever experience in a first-person shooter. Nothing, however, is more anti-climactic than a 300% ticket match ending with a simple fade to black (or fade to white in the case of Battlefield 3). I loved the little post-game cinematics that Bad Company 2 offered at the end of rounds. It really gave you a sense of accomplishment. Hearing soldiers celebrate while watching the enemy’s base blow up just felt… right. Sure, it’s one extra step in order to get to the post-match screen, but it was only a few seconds long and who doesn’t want the quick rest after the lengthy battles that both these game have to offer? To add to this, it also gave multiplayer battles context and story, reminding players that there was a point to your 37 kills and 6 arms or captures. This was also somewhat carried over to DICE’s work on Medal of Honor’ multiplayer. Sadly, it seems it was simply left behind for Battlefield 3.

Battlefield 3 has done a pretty good job at this so far. The jet bombings after the first base on Operation Metro or at the beginning of Kharg Island on Rush are pretty spectacular, along with the base jumping sequence after the second base on Davamand Peak. While Bad Company 2 didn’t have as grandiose of a transition on many of its maps, it did, at least, throw in some screaming jets flying overhead after destroying a set of MCOMS on many of its maps. I think this is a simple addition that could be implemented a few more times on some of the Battlefield 3 Rush maps.

If there are two things that I think Bad Company 2’s older engine did better and had more of, they would be foliage and snow. In fact, Battlefield 3 doesn’t even have any snow-covered maps (though this could change soon). Understandably, Battlefield 3 is set in much more urban environments, but I figured DICE would have taken the chance to show off the power of the Frostbite 2 engine with some densely forested maps or brightly lit snow-covered maps. Need for Speed: The Run showcased a fairly impressive snow level in its demo alone and it uses the exact same engine. Of course, we all remember Bad Company 2 Vietnam with its thick bushes and trees, slightly altering the gameplay making for some vicious jungle-based combat. Hopefully, we’ll see some of these ideas come to fruition in the upcoming Battlefield 3 DLCs. 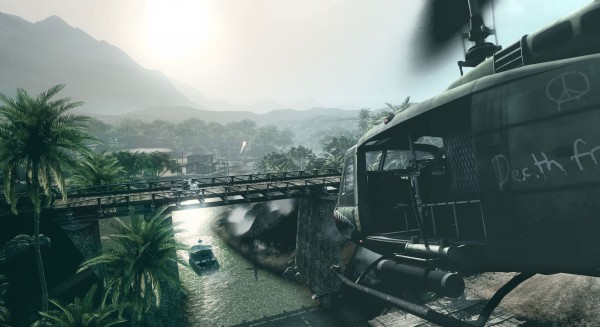 I miss you, bushes and trees.

Parachuting into the battlefield:

Nothing puts you in the try-hard mood like parachuting into the heat of battle with your fellow soldiers at the start of a round in Bad Company 2. It was impossible not to get pumped seeing a shrunken Battlefield before you slowly enlarge as you soar past explosions and gun fire. In fact, I feel Battlefield 3 had the perfect opportunity to take this a step even further. You may remember in one of the later single player missions (what? Battlefield 3 has single player?) when you and two Russian soldiers drop out of a plane and sky dive to the earth below. How awesome would it have been to have included this in the multiplayer, at least at the start of a round? Admittedly, this wouldn’t work well on all maps, but what about Caspian Border with its wide-open areas and lack of tall buildings? This, I think, would have made for an extremely unique gameplay experience.

Showing the next map in between rounds:

This is a simple one. If it’s too much to ask for an image of the next map in the rotation between rounds like in Bad Company 2, couldn’t we at least get some sort of indicator revealing the name of the map? You may remember that DICE recently added the ability to quit between rounds in the latest patch. I feel like that quit button could have been put to much greater use if we knew that Tehran Highway was coming up next in the map rotation. (Sorry, Tehran Highway, but the stats don’t lie.)

I think we need to admit that some maps in Battlefield 3 simply work better for some game types than others did. Of course, it’s nice to have the choice, but I feel that some of the more memorable maps in Bad Company 2 were exclusive to either only Rush or only Conquest. Valparaiso (Rush), Isla Inocentes (Rush), Cold War (Rush), Panama Canal (CQ), and Heavy Metal (CQ) all come to mind. By creating a map exclusive to a game type, I think developers can specifically tailor it to play really well on that game type. For example, Davamand Peak in Battlefield 3 was obviously built for Rush. Conquest might work well on it, but you’re limited to only a portion of the entirety of the map. Also, some would argue that CQ on Davamand Peak and Operation Metro, for example, are far too linear. That’s because they are. These maps didn’t seem like they were built with CQ in mind. Some might also say that the last thing Battlefield 3 needs right now is a limit to the amount of game types it includes. But I don’t remember anyone complaining back in Bad Company 2. DICE has proven that they know how to craft a specific experience with a simple idea of a game type like Rush or Conquest. Anyways, this one isn’t so much of a demand as it is a suggestion. Plus, I’m betting we’re going to see some pretty gigantic and epic Conquest-only maps in the upcoming DLC, Armored Kill.

Simple. Where are they?! It also isn’t entirely clear what exactly each weapon attachment does. This could be frustrating for newcomers to Battlefield 3. Also, I thought the weapon stats screen in Bad Company 2’s main menu was very clean and would have loved to see that carry over.

A lot of these things might seem minor, but because they’re small and simple like weapon stats, indicators of upcoming maps or post-game cinematics, it makes me wonder why they were never simply translated over to Battlefield 3. Could it be because DICE wanted to stray away from the Bad Company 2 look and feel? Could it have been engine limitations? We can only wonder. Perhaps, they are saving these features for Battlefield: Bad Company 3, which was recently spotted in development? And although some of you might consider these things unimportant, I feel like they still can add a lot to the immersive experience that the Battlefield series is known for. It could have been that extra bit of polish, only making the game better than it already is.

However, I’d like to end on a more positive note, reminding you to look back at all the things DICE added to Battlefield 3 as well. Maybe that even calls for another editorial on another day. One could argue that the beauty of both games is that they are both different and each carry their own without one out-weighing the other. While Bad Company 2 may lack the large player base that Battlefield 3 now boasts, it’s still worth a visit.

So, why do you guys think these details and features weren’t carried over from Bad Company 2? Are there any that I missed that you just can’t live without? Leave your suggestions in the comments below!