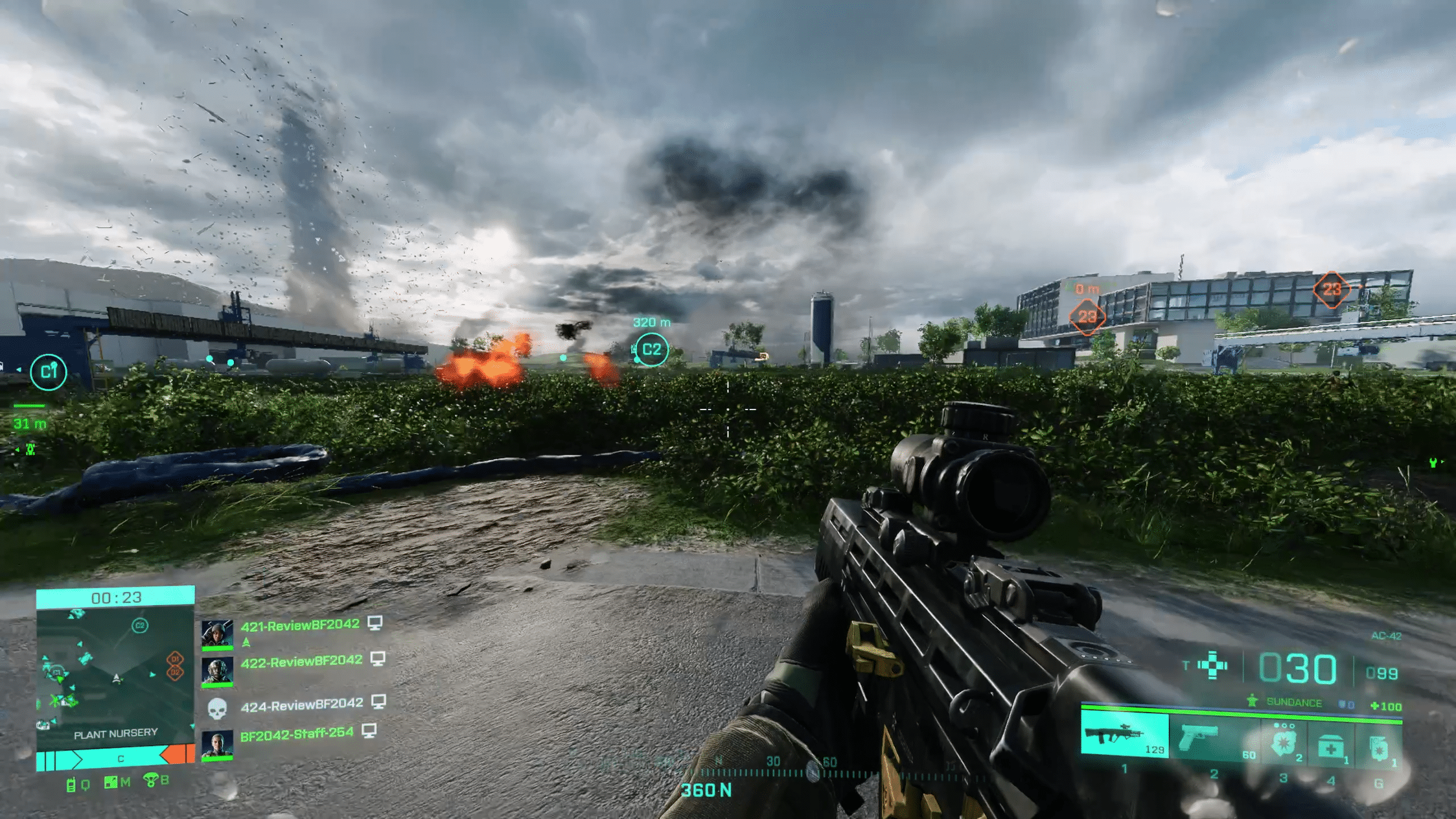 After a one month delay, Battlefield 2042 is finally out this week in its Early Access period. This past week, MP1st was invited to get an early preview of Battlefield 2042 with content creators and media. This was the full build of the game, and according to DICE, it is the same build Early Access players will have this Friday. We had a chance to preview each of the game’s three core modes on a variety of maps for several hours each. So how were they? And what’s changed since the beta? Read on.

The first thing I was keen to try out was the performance on PC. Thankfully, there have been significant improvements on that front. While frame rates have improved somewhat, the biggest thing I noticed was the increase in overall smoothness. For me, the beta was “stuttery,” and I regularly experienced significant frame drops. Thankfully, that has been almost completely eliminated in the final build. 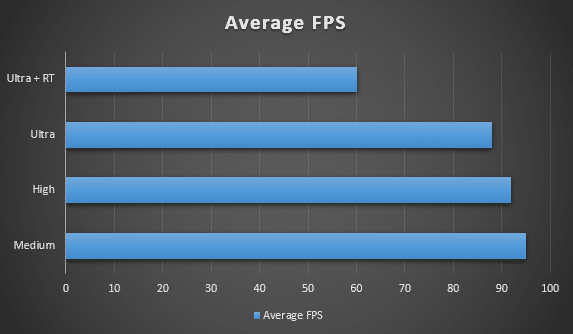 It is still a demanding title though. DICE recommend an RTX 3060 and a Ryzen 7 2700x for optimal performance. But players looking to play at high frame rates will want a beefy CPU. For reference, on Ultra settings I averaged around 80 – 90fps (frames-per-second) at 1440P, with a 5900x and an RTX 3080. For most of the preview, I opted for the High preset, where I averaged around 95-100fps. All of the numbers above are with DLSS set to Quality mode.

Ray tracing should be avoided altogether at launch. I could barely manage 60fps with it turned on, and the game frequently dipped into the 50’s and 40’s, even with DLSS.

With that said, the game looks excellent. While I wouldn’t say it’s the true next-gen Battlefield experience many were hoping for, the Frostbite engine continues to be one of the most visually impressive around. That goes for the Battlefield Portal maps too.

First, we got to try out Conquest and Breakthrough on six of the seven maps available in All-Out War at launch. Orbital was the only map available in the beta, so I was interested to see how the other maps would play. One thing was common across nearly every attendee I spoke to — Orbital was among the weakest maps in the game. That’s not to say it’s a bad map; but my squad and I felt that other maps were more interesting, varied, and overall a lot more enjoyable to play. 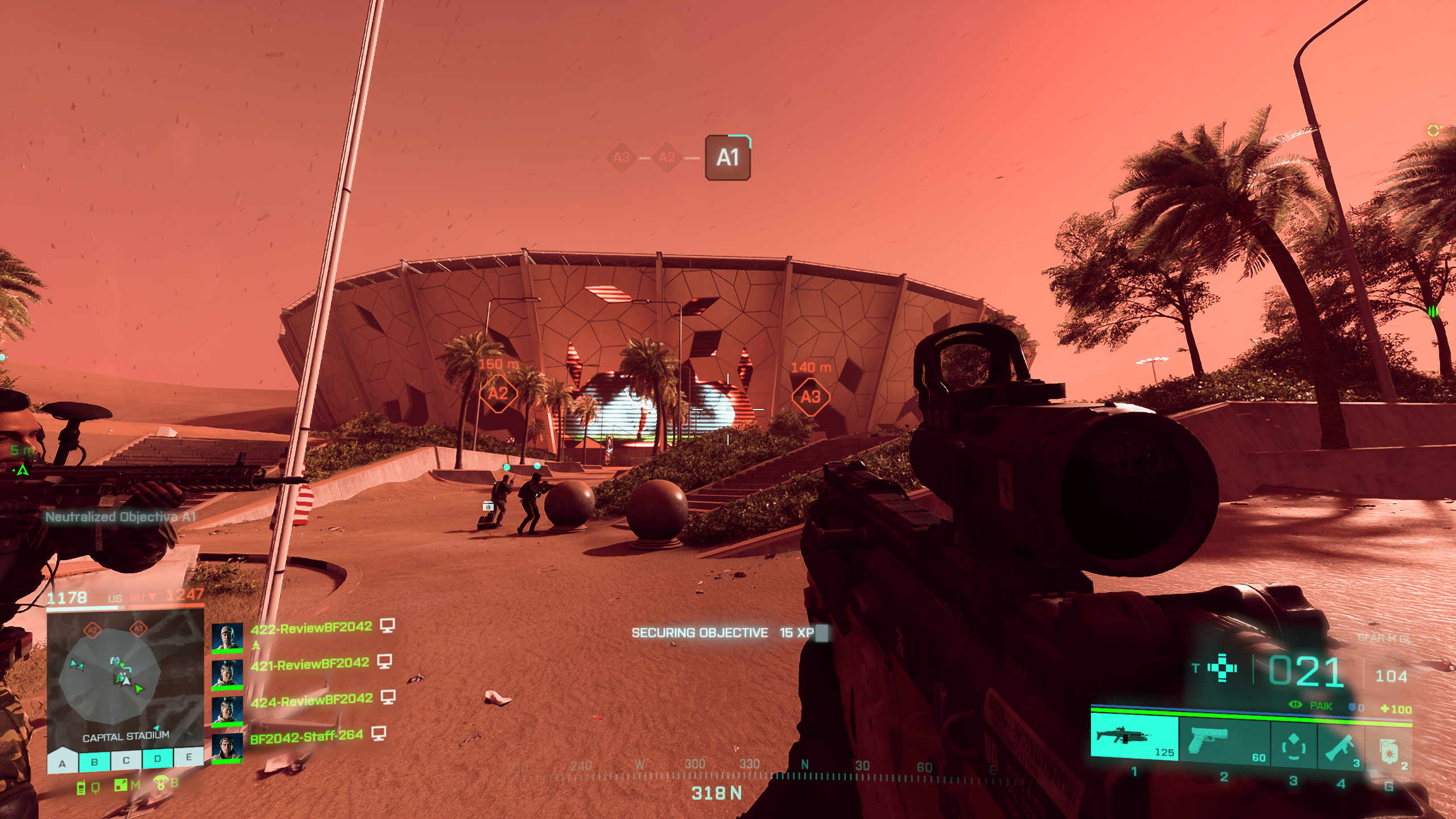 There are other large open maps like Orbital in the game, like Hourglass and Renewal. But these maps also have tighter, more close quarters areas. Renewal for example is literally split down the middle. One half is a wide-open rocky area, and the other is a large industrial complex situated on some dense farmland. Kaleidoscope is set in a raging sandstorm, with a soccer stadium on one side, and a downtown area with towering skyscrapers on the other. For the most part, I felt that these other maps offered better opportunity for gunfights at all ranges — rather than just at long to medium range like on Orbital.

Battlefield 2042 also has doubled the player count on PC and new-gen consoles. While the maps felt pretty well balanced for this in Conquest, at times Breakthrough could get extremely chaotic. Squeezing double the player count into a small sector of the map can feel like bashing your head against the wall – especially on the Attacking side. You now have 64 defenders on the other team pre-aiming at you, rather than 32. You will have to get creative to break through (no pun intended). I suggest bringing smoke grenades.

Everything else is largely the same as the beta, although the severe lack of launch weapons sticks out like a sore thumb. There are a meager 22 new weapons in All-Out War and Hazard Zone, with about 2-4 weapons per weapon type. This will no doubt change as DICE’s post-launch content starts rolling out, but given that they recently announced (link here) that we won’t hear more about that until early next year, anyone playing during the launch window is going to have to live with these. We had everything unlocked from the beginning, so we unfortunately didn’t get a chance to fully experience the weapon and character progression. We’ll have to see how DICE can keep XP grinders intersted until new content starts to roll out.

Full disclosure, I have never played Escape From Tarkov. But from what I gather, that’s pretty much what Hazard Zone is.

You and your team drop onto the map, locate and secure data drives, and extract at one of the designated extraction points on the map. The extraction vehicle flies in twice during the match — once about halfway through, and once at the very end. Failing to extract results in a loss, as does a team wipe.

Before each match, you’ll have a chance to purchase weapons, perks and equipment using credits that you earn after completing matches. Getting kills, successfully extracting, and other actions will earn you an increased amount of credits post-match. There’s also a “win-streak” mechanic which earns you increasingly more credits, for every consecutive match you manage to extract in. 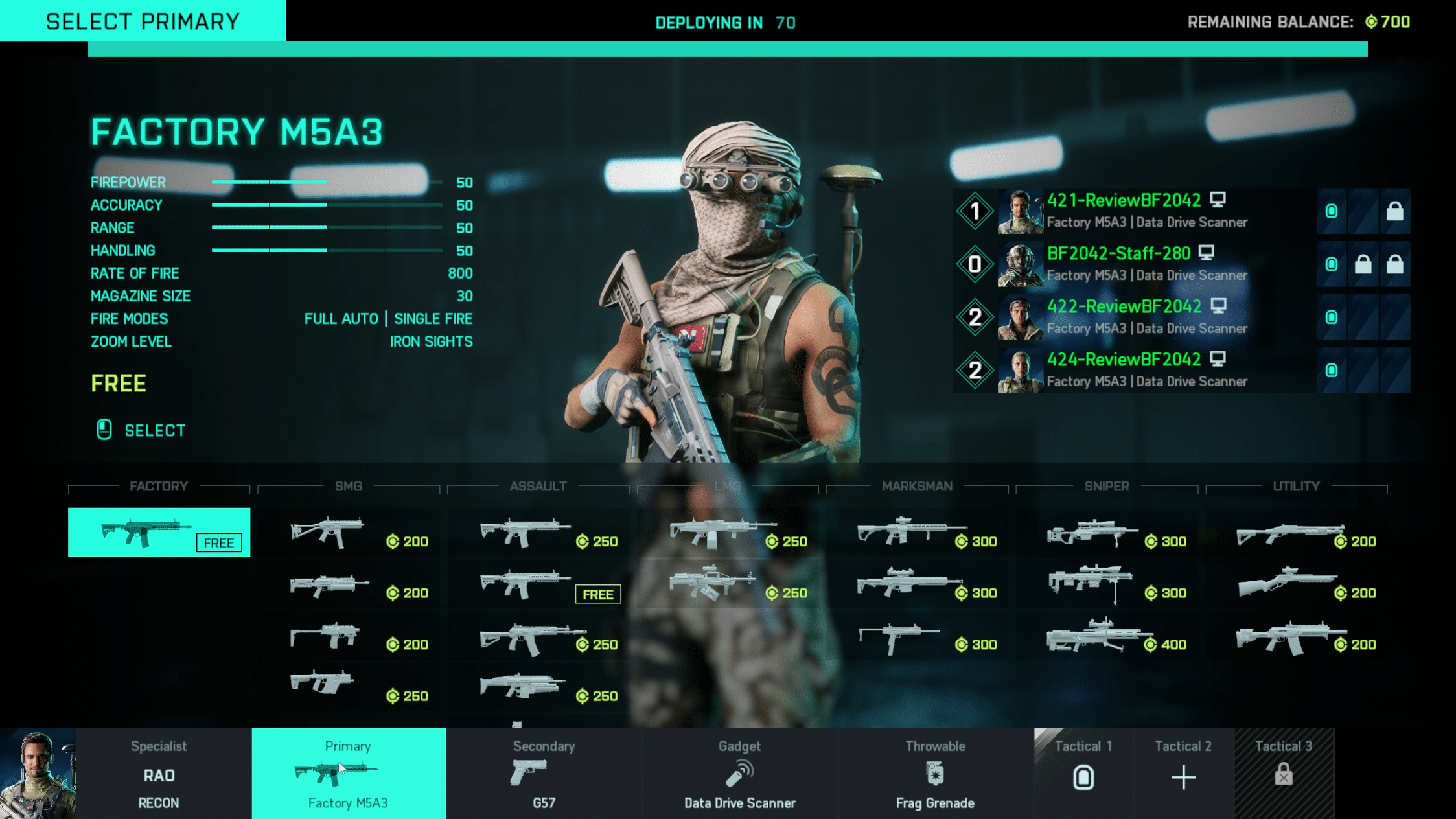 What that means is, as a new player, you’re going to have very little to work with, and will have to manage with the default loadout the game gives you. But the more you play, and the better you do, the more credits you stack up to purchase gear before every game. Going on an Extraction Streak also unlocks an additional perk slot, up to a maximum of three. I found that even after losing a match, we earned enough credits to buy what we needed for the next game, but we certainly weren’t buying things like sniper rifles, or some of the higher-tier perks.

There has been some concern about lower skilled players having trouble against Hazard Zone diehards, purely because of the imbalance in loadouts. While our team didn’t find this to be an issue, we also managed to extract somewhat regularly. So while there were games where we failed to, those leftover credits definitely helped. DICE told us this is something they’ll be watching closely at launch (during a Q&A session which MP1st will be diving into in a separate article).

Hazard Zone was a pleasant surprise. I wasn’t sure what to expect with this mode but I can definitely see it being something I play regularly alongside All-Out War and Portal. While it’s not quite a Battle Royale, it has the same sort of feel and it is definitely going to appeal to fans of that genre. This feels like a fully fleshed out mode, not just an afterthought. Communication is key in this mode. In fact, Hazard Zone feels even more team-oriented than All-Out War. Your team’s specialist selection will be crucial, and some of the specialists really shine here.

The third and final pillar of Battlefield 2042 is the new Portal mode. Basically, think of it as the server-browser from past entries, combined with n custom-game editor on steroids. There is an endless list of customizations you can make. From the simple stuff like selecting the map rotation and weapon selection, to the highly specific and wacky stuff. The most interesting mode we tried was a rocket launcher-only Free-For-All, with a twist. To reload your rocket, you had to jump up and down five times. If it sounds crazy, that’s because it was — but it gives you an idea of the amount of freedom the Game Editor gives you.

Thankfully, DICE has made every new map coming to Battlefield 2042 available in Battlefield Portal. They’ve also made five classic maps available from previous Battlefield entries, fully remastered and “reimagined.” There are some changes to them, but for the most part these are the maps Battlefield fans know and love. And they look fantastic. 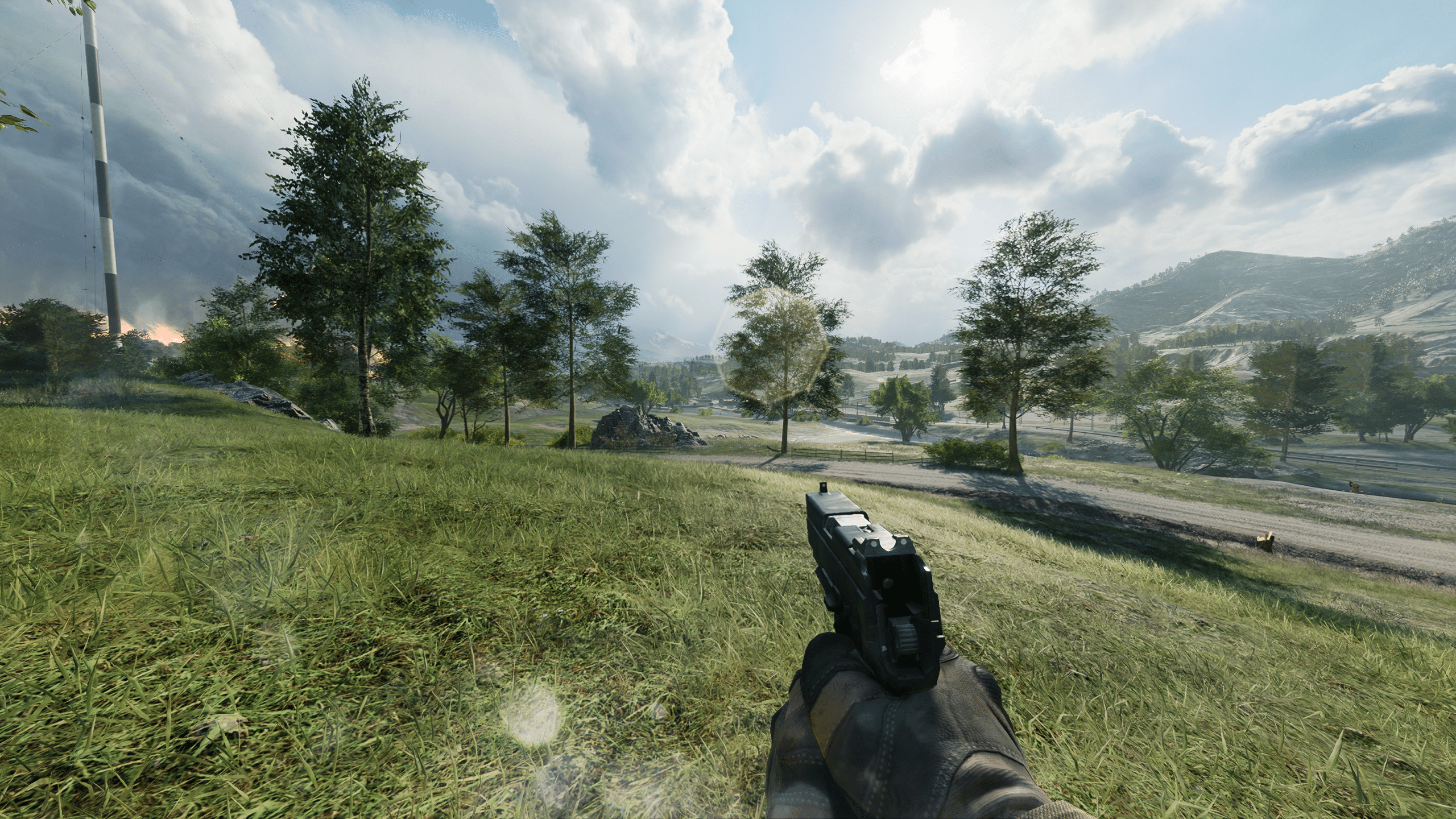 What really excites me about Portal is the flexibility. Seeing what kinds of creations the community comes up with will be a treat. Battlefield Portal also completely negates the lack of weapon variety in All-Out War. Since all of the new maps are playable in Portal, you can just create a Conquest server, add in the remastered Battlefield 1942, Bad Company 2, and Battlefield 3 weapons, and throw in the remastered maps for good measure. DICE also confirmed to us that experience gains will be consistent across all three modes, so there is no downside whatsoever to playing Portal.

With all of this combined, I fully expect Battlefield Portal to be where it’s at.

There has been a lot of hype surrounding Battlefield 2042. But as we have seen before, sometimes too much hype can be a bad thing. Is Battlefield 2042 a good Battlefield game? Yes. Is it the savior of gaming that many first-person shooter fans pegged it to be earlier in the year? Not exactly.

After 10+ hours of playtime, I would put my final ranking somewhere between Battlefield V and Battlefield 1. While I don’t think it quite reaches the level of immersion and quality as Battlefield 1 did, it is in my opinion, a far better showing for DICE than Battlefield Vwas.

The new specialist system shakes up the class system of previous Battlefield titles, and allows for far more freedom when creating loadouts. Instead of relying on teammates to play Medic and heal you, you can do it yourself. Hazard Zone is an interesting take on a single-life Battlefield mode, and will satisfy those looking for a more hardcore, team-based experience. And if neither of those work, DICE LA have put a ton of effort into creating the Battlefield Portal which allows the community to make whatever modes they want.