In case you didn’t know, one of the biggest changes to Battlefield 2042 is the introduction of Specialists. These Specialists will have an exclusive gadget on their own that makes them unique, and which will give players more freedom than being locked to just one specific class (like in past games). When it comes to weapons, DICE has confirmed that Specialists can equip any weapon type that they wish.

If you want to be a medic but use a sniper rifle? Yeah, you can do that. It looks like these applies to launchers as well. In a behind-the-scenes dev chat about Battlefield 2042, DICE has confirmed that every Specialist will be able to equip RPGs! While that might sound good in the sense that every player can now have access to anti-vehicle weapony, that simple change can lead to abuse. Imagine if all 128 players in a single match equipped RPGs! That meant that every vehicle would be shot out of the ground (and sky!) within seconds!

In the devstream’s Twitch chat, someone voiced this exact concern with EA Community Manager Kevin Johnson (T0TALfps) mentioning that DICE is aware of this little snag in their plans, and that players shouldn’t be concerned, as more details will be shared soon. 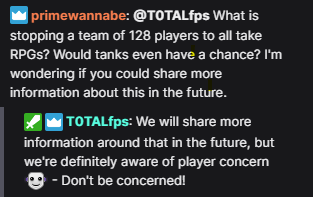 Will they make vehicles take a load of hits before they are taken out? I don’t see that being balanced, but whatever DICE has planned, let’s hope it actually works, as I don’t think everyone carrying launchers and firing it everywhere will be fun for those driving vehicles in Battlefield 2042.

In the same stream, DICE mentioned how it took them over three years to develop the game’s weather and levolution tech.