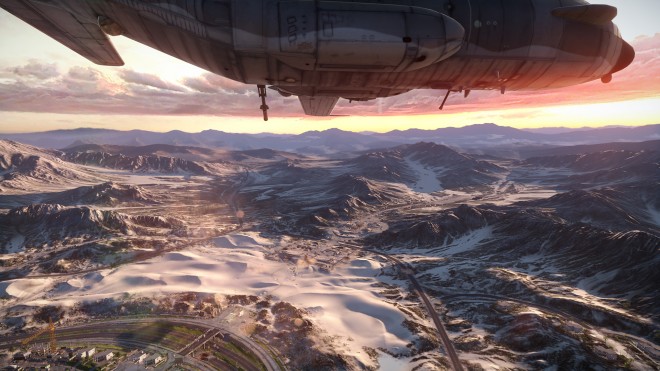 DICE developers look to Battlefield: Bad Company 2’s Atacama Desert and Arica Harbor for inspiration when it comes to building the largest map in Battlefield history, to be included in the upcoming Armored Kill expansion pack.

“Me and my colleagues had already discussed how cool it would be to re-create Atacama Desert and Arica Harbor from Battlefield: Bad Company 2 in the ever improving Frostbite 2 engine,” says Jøran Holberg, Designer at DICE, in the latest issue of Inside DICE. During the release of Battlefield 3 last October, Holberg was asked by the Operations team if he had any ideas for “Xpack 3”, aka Battlefield 3’s third expansion pack, after Close Quarters.

While it would have been nice to see the two fan-favorite BFBC2 maps “get the Frostbite 2 treatment” in an expansion pack for Battlefield 3, Holberg figures, “they would really only classify as medium sized maps in Battlefield 3 and I was certain there were still loyal Battlefield fans whose needs we hadn’t met yet – those who loved to play on the very biggest of maps in Battlefield 1942 and Battlefield 2 (such as El Alamein and Fushe Pass).”

After receiving the okay to “go big,” Holberg and team went to work on recreating those Battlefield experiences of old.

He mentions, “when it comes to gameplay, we here at DICE have been enjoying Atacama Desert in Battlefield: Bad Company 2 a lot, just like many of our players. I started thinking about how the best parts of the gameplay on Atacama could make the transition to a new map like Bandar Desert.” He recalls some of his favorite aspects of Atacama Desert – “the mix between the built up village areas with lots of destruction and the barren desert where tanks and other vehicles were in their strongest element. Out there, vehicles could duke it out between the sand dunes, using them in large strategic maneuvers to hide or partially hide, protecting the lower parts of the tank when firing. There were also always a few areas where infantry could have the upper hand at times without making it hard for vehicles to enter the area.”

However, Holberg explains, “in Bandar Desert, supporting 64 players and jets, everything would have to be larger and build much more on vehicle gameplay on a grand scale than Atacama Desert. At the same time it should be scalable for consoles with fewer players without it leading to compromises for the 64 player version.” So, a few requirements were set out in order to compliment the gameplay of Battlefield 3:

Holdberg goes on to explain just how big Bandar Desert, the map shown off in some of the latest Armored Kill footage, really is.

“In Conquest Large, Bandar Desert is stretching as far as 1,900 meters from U.S. to Russian deployment, not counting the airstrip at the very end of the ground forces combat area. This is even longer than Fushe Pass from Battlefield 2. Bandar Desert is about as wide as it is long at the middle flags – it measures 1,900 meters from the mountain base furthest from the sea  all the way to the beach at the south edge of the map.”

But it doesn’t stop there! He continues, “As a comparison, Caspian Border is roughly 1,100 meters between the U.S. and Russian deployments — around 800 meters difference both in width and length. Should you count the distance between your spawned jet and the enemy spawned jet, you will end up with 2,400 meters on Bandar Desert. From the closest capturable flag to the furthest capturable flag, you are looking at around 1,200 meters. For Caspian Border, the equivalent distance is just about 400 meters.”

So, get in those empty servers and start practicing your piloting and tank driving skills! Armored kill hits the Xbox 360, PS3 and PC this September.

Name A Multiplayer Mode In Medal of Honor: Warfighter