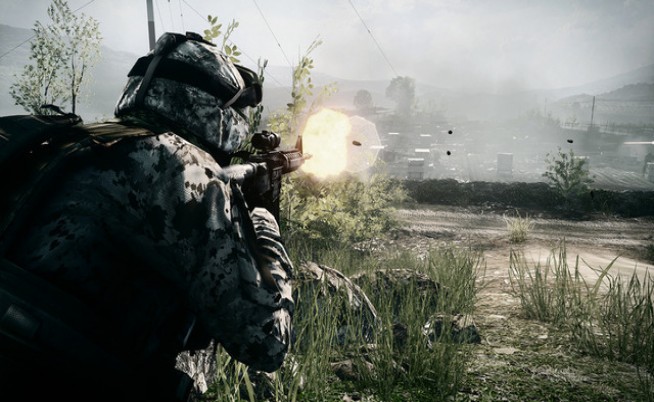 Developers at DICE share some updates regarding upcoming Battlefield 3 patches and hint, once again, at snow-covered maps making their way to BF3. Also, more on the Android version of the Battlelog app.

The recent Battlefield 3 patch did bring with it it’s fair share of issues. Luckily, along with previously promised updates, Senior Gameplay Designer Gustav Halling has confirmed, “…we are working on a future patch for some issues,” however, there is still “no date.” One bug in particular that is quickly gaining attention is the extreme effectiveness of the M26 MASS underslung attachment. Clearly, it was not meant be tweaked in such a way and Halling has confirmed a fix in the “next client update, no date.” Additionally, a bug that hides the Squad Leader from the minimap when using color blind mode has been sent to QA for reproduction and will be looked into, according to Community Manager, Daniel Matros.

Tim Kjell, Game Designer at DICE teased some incoming “nice tweaks” as well. Yesterday, he tweeted to his followers, “before I went home sick yesterday I saw some nice tweaks by [Alan Kertz, senior gameplay designer at DICE] – he might be on to something sweet.”

Just recently, DICE/EA released the iOS version of their social network service, the Battlelog. You can read more about it here. Android users are still patiently awaiting for their own version of the app. Elton Muuga, Web Software Engineer at DICE, teased that it is in the works and could see a release soon. As he jokingly commented on his fingernails in a recent promotional shot for the app, Muuga tweeted, “People complaining about my fingernails in the promo shot, sorry. I will fix that after the Android release.”

Onto something, shall we say, more interesting? A few days back Halling mentioned the word “snow” in one of his tweets (unrelated to BF3). However, when one follower explained to him that this reminded him to ask if any snow-covered maps would possibly make it into DICE’s upcoming Armored Warfare expansion, Halling simply answered, “the future will tell.”

Snow-covered maps have been quite a hot (or cool?) topic among Battlefield 3 fans for quite some time now. The last hint we saw was back in December while more recently, we saw some fan-made images of snow-covered maps in Battlefield 3. We know we’d definitely like to see this happen!

Modern Warfare 3 Collection 1 for PC Shows Up on Russian Retailer, Slated for This Month

Halo 4 Gets an Official Release Date