Battlefield 4‘s Second Assault DLC may soon see the light of day on platforms other than the Xbox One.

According to a chat that Origin user “Dhruv” had with an EA Customer Experience representative, the multiplayer add-on that launched on Microsoft’s next-gen platform last October through a timed-exclusivity deal may arrive on the Xbox 360, PlayStation 3, PlayStation 4 and PC late February. 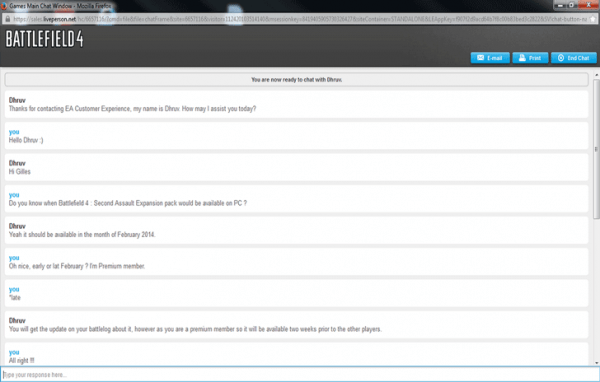 As the representative noted, the DLC will launch first for Premium members, eventually making its way to non-subscribers two weeks later.

Second Assault brings back to life four fan-favorite Battlefield 3 maps; Operation Métro, Operation Firestorm, Caspian Border, and Gulf of Oman. Originally, news of the expansion’s eventual launch on other platforms was few and far between and was later presumably put on hold after DICE’s announcement to put off all future Battlefield 4 projects until the game’s core issues were addressed.

Still, we’ve no official word from either DICE or EA regarding Second Assault’s Xbox 360, PS3, PS4 and PC launch, so this mention in an EA support chat is all we currently have to go by. We’ll be sure to update you should we hear from either party.