With Battlefield 5’s latest update hitting earlier this week, it’s now normal for gamers to expect a flood of new, early and leaked info for the game via datamining the patch files. Today, there’s more of that. It seems we’ll be quite a number of Battlefield 5 new weapons as part of the rewards for Chapter 4!

Once gain courtesy of reliable Battlefield dataminer temporyal, we get the list of Battlefield 5 new weapons, new gadget info, a “Booster Pack” coming to Chapter 4, and even some of the new stuff coming in Chapter 5 (new game mode!). Not only that, but Battlefield 5 is also getting “weapon charms,” which Call of Duty players should be familiar with. They’re essentially keychains that adorn your weapon.

“Based on the C96, this pistol carbine was adapted for the trench warfare of the Great War.”

“The Fairbairn-Sykes Fighting Knife is the commando’s melee weapon of choice. Each is guaranteed to never run out of ammunition.”

Note: This is a black variant of the existing Fairbairn Sykes melee weapon.

“The first burst assault rifle of the era. Fires an accurate and deadly 4-round burst.”

New: “Barbed Wire” is a gadget (max capacity: 2) that damages and slows while passing through. Rainbow Six Siege players probably know what to expect here and it’s maybe 5v5 exclusive. 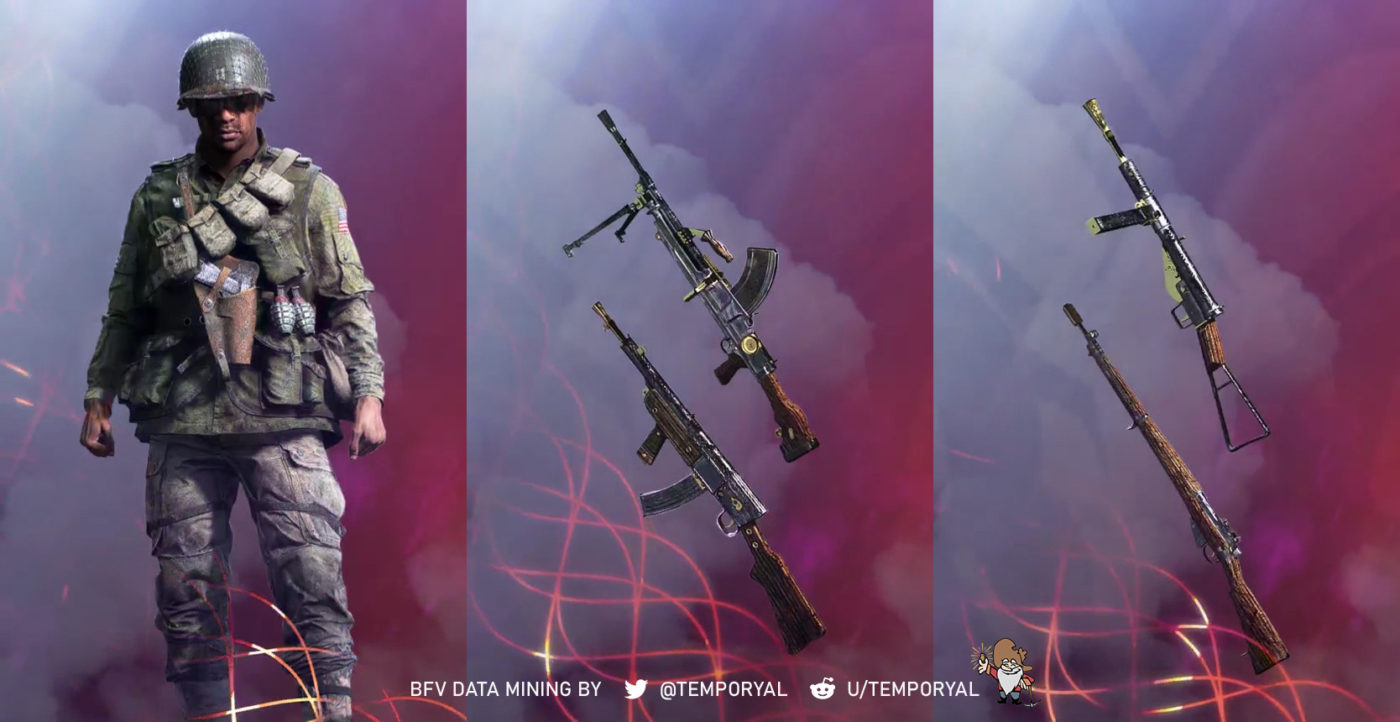 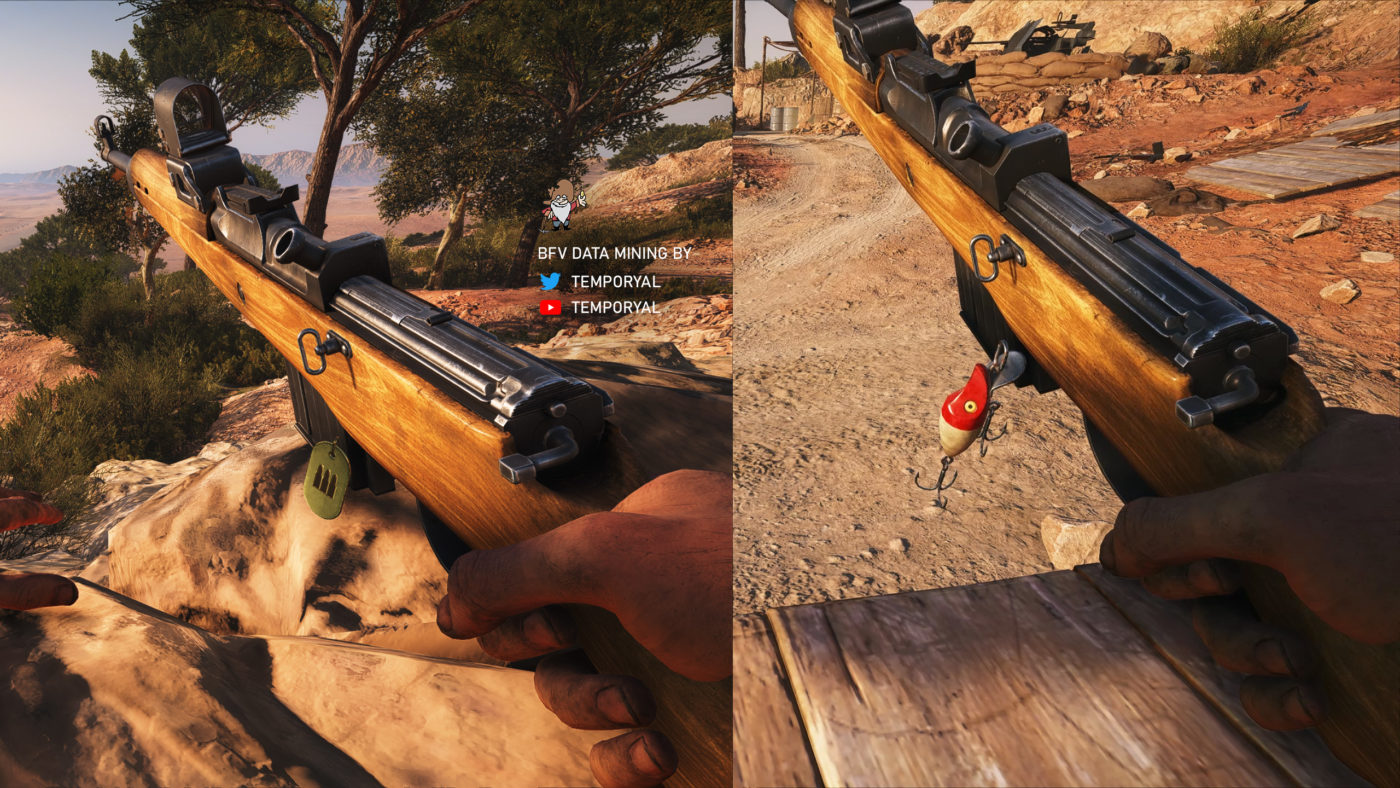 Charms are an additional way to customize your weapon.

​A vehicle that never made it into the final game is the “Command” version of the Staghound. According to Wikipedia the turret was removed and extra wireless equipment was installed. It’s briefly mentioned in the files (probably since ages…) but doesn’t even have a model like some other unreleased vehicles. One can only speculate about the idea and it’s purpose in Battlefield V and I forgot to mention it on Reddit in the past. 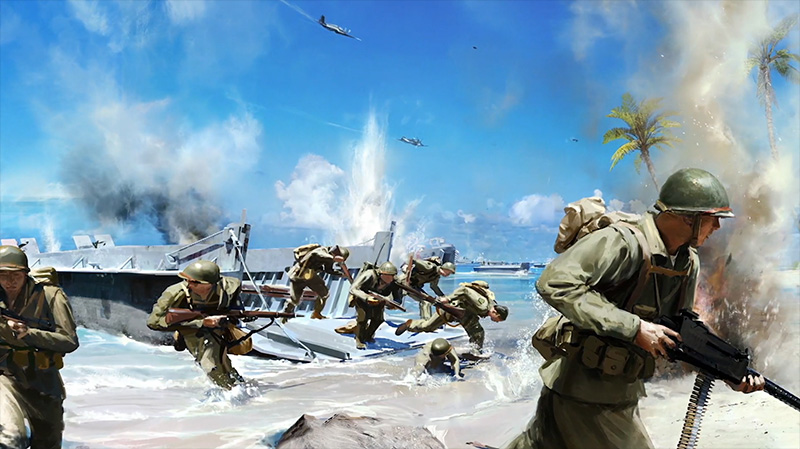 ​The Pacific will feature a beach landing game mode. It seems to be split in two phases and could be the previously datamined mode “Invasion”.

Build a beachhead: The attackers start on sea and need to build beachheads to gain spawn points on land.

Arm the objectives: The attackers will win the battle once their team has armed and destroyed all objectives. They have to defend armed objectives from enemies trying to disarm them.

Defend the objectives: Defenders have to eliminate enemy soldiers and disarm any armed objectives to win the battle.

Grand Operation: The Battle for Greece

April 1941: Axis command is furious at the lack of progress. They initiate unternehmen marita, deploying 600,000 fresh forces to break the deadlock.

The rumble of relentless war machines echo through the valleys of epirus, announcing the beginning of the next german offensive.

The fatigued Allies no longer fight to win but to bleed the enemy of time and of resources.

They will sell their lives dearly.

Despite great sacrifice, the Allied lines are broken. The Allies regroup on the island of crete and institute and urgent evacuation plan.

German forces rush to encircle the remaining Allies. Cutting off any escape before the Royal Navy arrives.

Their goal is the total destruction of their enemy.

Extended combat on Crete sees both german and british forces depleted in resources and exhausted in manpower.

All that remains is survival.

Whew! That’s a lot, no? Now, remember, none of the stuff mentioned above have been confirmed, so don’t be disappointed if they’re somehow different, or just not included in the game at all.

Speaking of leaks and datamined info, check out this early gameplay look at the Karabin, and there’s also a lot of new soldier sets that got leaked.