While it’s been a rough week for Battlefield 5 in terms of news given we now know that double XP isn’t possible given it’s a tech issue, it seems another tech problem isn’t getting fixed again, and these are the Battlefield 5 Ribbons issue.

For those not familiar with Ribbons, it’s a standard award given in almost every Battlefield game. While it was originally featured in Battlefield 5 acting like they did in previous installments of the franchise, there was a Battlefield 5 Ribbon issue that made it so that it didn’t display the proper image or criteria when awarded, nor could they be viewed in a match’s post-action report, which prompted DICE to just remove them from the game entirely. Unfortunately though, we just got confirmation that DICE won’t be able to fix Ribbons at all.

Over on the Battlefield 5 subreddit, a fan asked if Ribbons are coming back, to which DICE Global Community Manager PartWelsh mentioned it’s “very unlikely,” and shared that there’s a “nasty bug in the code” which prevents it from coming back. 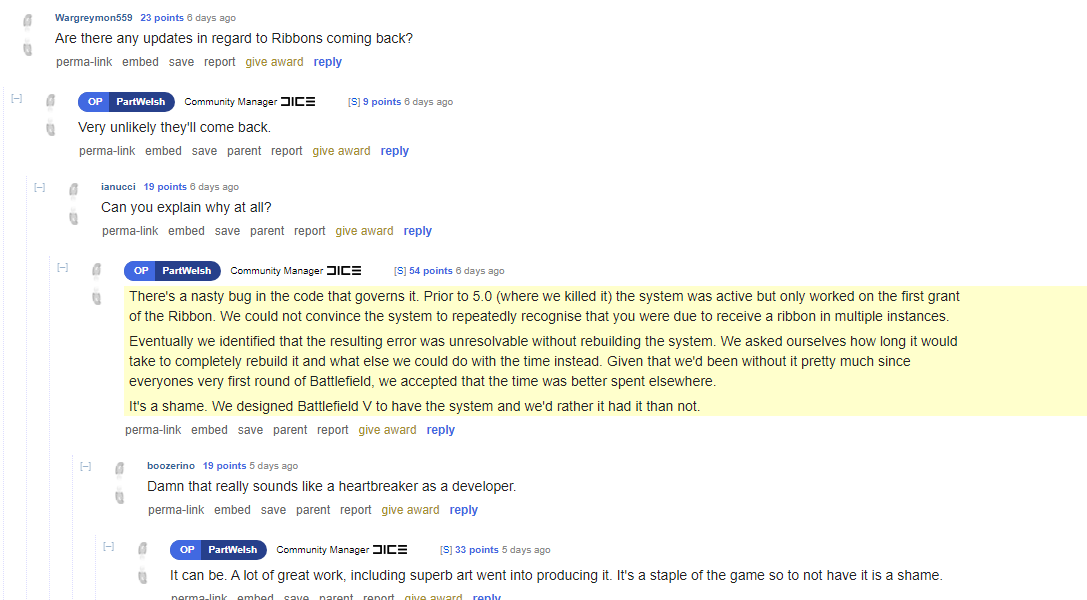 There’s a nasty bug in the code that governs it. Prior to 5.0 (where we killed it) the system was active but only worked on the first grant of the Ribbon. We could not convince the system to repeatedly recognise that you were due to receive a ribbon in multiple instances.

Eventually we identified that the resulting error was unresolvable without rebuilding the system. We asked ourselves how long it would take to completely rebuild it and what else we could do with the time instead. Given that we’d been without it pretty much since everyones very first round of Battlefield, we accepted that the time was better spent elsewhere.

It’s a shame. We designed Battlefield V to have the system and we’d rather it had it than not.

Aside from that, there’s another thing that players want that can’t be done, and that’s limited time modes (LTM) playlists. Reddit user Blothbather suggested that DICE adds Outpost, Grind, Rush & Frontlines game modes as part of the remainder of Chapter 6, and tagged Battlefield US Community Manager Jeff Braddock if it’s that possible. Well, the short answer is: it’s not.