Battlefield 5 Self Resupply From Teammates Included in Next Patch

If you’re a long-time Battlefield player, chances are you’ve encountered a teammate Medic and/or Support that for some reason, never gives out ammo crates, health pouches and the like, no matter how many times you call out for it. This annoyance is further compounded in Battlefield 5 due to the Attrition system DICE has put into play.

Now, if you’ve played Battlefield Hardline before, you might have experienced how Visceral Games “fixed” this little issue by letting players snatch ammo and health from their teammates by themselves. If you’re a fan of that, rejoice! This Battlefield 5 self resupply gameplay mechanic is coming to Battlefield 5 via its next title update!

This was revealed by DICE Engineer Julian Manolov who also mentioned that this is only allowed if the Medic and Support teammate equips the health/ammo crate and not the pouches.

More next BFV patch fun with @elementofprgres and @DRUNKKZ3 ?
This is allowed only if the health/ammo crate is equipped and not the pouches. pic.twitter.com/DR3rPPqa08

Over on the Battlefield 5 Subreddit, user KillerCh33z snapped a screenshot of Battlefield Community Manager Jeff Braddock confirming that this will indeed be part of the next game patch. 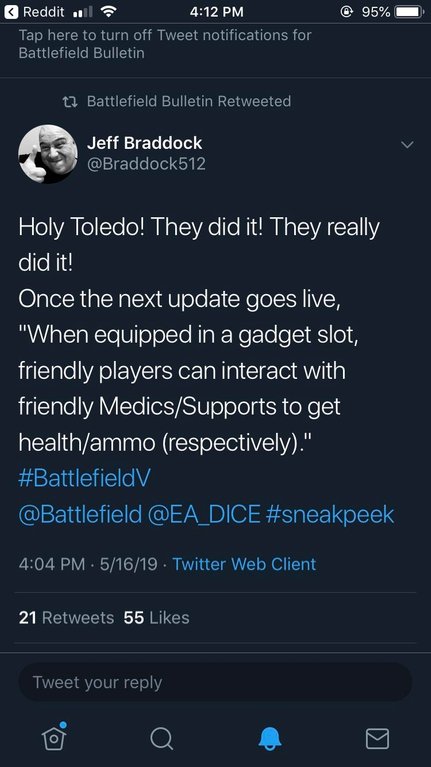 In the same Reddit thread, Gameplay Designer Florian Le Bihan commented that DICE will adjust the health and ammo crates moving forward based on feedback, and what’s more, they are still looking into health and ammo in general, and those two will likely see adjustments.

This should help alleviate some of the stress Battlefield 5 players get when they have teammates who are either oblivious or just flat out don’t care that their teammates need ammo and health.

Are you a fan of this being introduced in Battlefield 5 or do you think it might promote less teamwork overall?

Another new thing to be added in the upcoming patch? It’s manual leaning, which can be seen here.