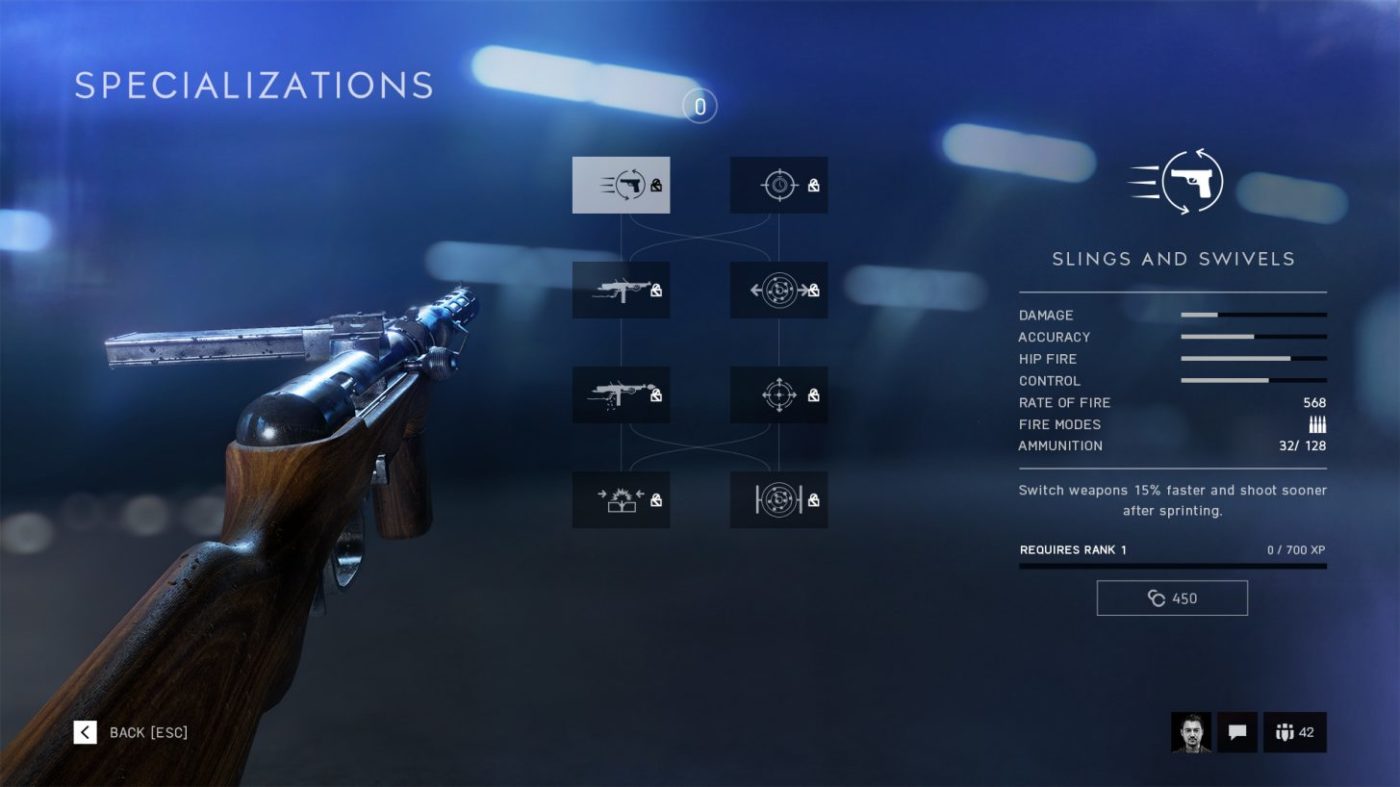 In a new post on EA’s website, DICE has given us an in-depth look at how the Battlefield V weapon upgrade tree and specialization will work in the game. According to the studio, Battlefield V’s weapon customization will emphasize “quality over quantity” compared to BF3 and BF4.

DICE has made a point this time around that a fully specialized weapon will not be tied to how it will look. As an example, the studio used the EMP submachine gun and highlighted how its upgrade tree will let players choose how to want to use the gun. While the BFV beta only had four paths to go through in the weapon upgrade tree, the final game will have eight paths! DICE says they increased this to “provide more choice.”

As an example, the four specializations on the left path will buff the EMP mainly for close-range engagements, while the right side will improve it mainly for medium and close-range situations. It will be up to the player if they want to go all in on one side, or get a little from both left and right paths.

Let’s start with the four Specializations on the left side of the EMP tree.

Slings and Swivels: Allows swapping to your EMP or sidearm faster. This comes in handy when, for instance, you’re in a firefight and you don’t have time to reload your EMP. Swap to your sidearm in 0.65 instead of 0.75 seconds and win the fight. You’ll also shoot sooner after sprinting.

Enhanced Grips: This improves your base accuracy when firing from the hip. Unlock this and get 25% less hip fire-related spread and 33% better range.

Polished Action: Decreases hip fire inaccuracy and makes your EMP stay accurate for a bit longer. You’ll get around 40% less inaccuracy from hip firing with this unlocked.

Recoil Buffer: Keep your EMP steady with this Specialization. It reduces vertical recoil by 20%.

Moving on to the right side of the tree, you’ll find these Specializations tied to aiming down the sights (also known as ADS).

Quick Aim: Makes your EMP zoom in faster when going into ADS. Instead of 200ms, it will take 133ms to line up your weapon.

Custom Stock: Stay on target. This Specialization reduces spread by 33% while moving aiming down the sights.

Lightened Stock: Peak around corners more quickly while aiming. In your ADS view, you’ll move 60% quicker with this one.

Barrel Bedding: Reduces spread by 75% for ADS. Use it to get an extra headshot or two and enjoy the slightly longer sustained fire.

DICE also mentions how weapons can be re-specced, and that there will be weapon-specific Special Assignments as well which will be introduced once the Specialization tree is completed. Completing these in-game challenges will unlock “stunning, unique” vanity items for the weapon, and according to DICE, “Master these chained challenges; the end goal is truly golden . . .” Does this “golden” term mean anything? is it a hint at gold weapon camos now being in a Battlefield game?

For more on Battlefield V weapon info, check out how bullet penetration works in the game. We also posted what weapons each class can wield at launch too.