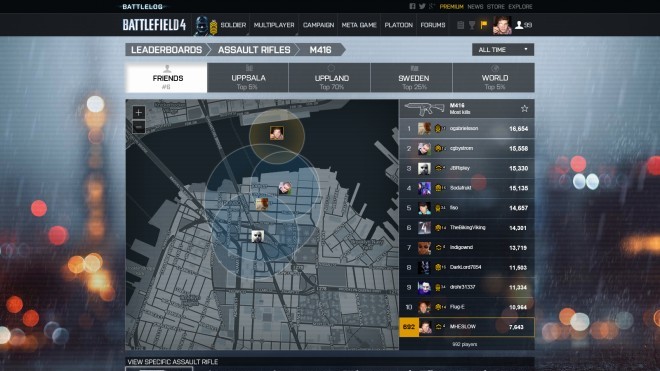 In preparation for Battlefield 4, a brand new update for Battlelog was previewed by DICE today and, for the most part, it looks like they took Battlelog 1.0, addressed what players have been saying about it, and made it much more useful, instead of just an annoying layer of abstraction between you and the game.

Check out some of the new features like the Battlescreen, missions, real-time loadout swapping, and geo leaderboards in the recently released trailer.

I’m excited to see DICE actually developing Battlelog as a service AND a product.

The biggest update, and something I think will make the new Battlelog actually useful, is realtime second-screen functionality.  Part of what makes the WiiU cool (yes, I know it doesn’t seem like there’s a lot) is that it’s controller has a tablet-like screen.  This opens up a whole new level of UI design, as in ZombieU where your inventory is displayed via the controller rather than onscreen, greatly increasing the level of immersion as zombies can still attack you when organizing your backpack.

Being able to glance down at my tablet/smartphone to look at my minimap and customize my loadouts in realtime is a pretty interesting feature, especially considering the limited room on-screen for HUD elements while playing FPS games.  Though I wish Batlefield 4 had a multi-monitor mode to display a full map and loadout editor on PC, I’ll take what I can get.

Overall, I hope Battlelog continues to improve away from the mistakes it’s current iteration is known for.  Despite it’s current shortcomings, it’s a good idea and has a lot of potential for future applications. What do you think of the new look and new functions?

Stay tuned to MP1st for more on Battlefield 4 and Battlelog as new information is revealed. For now, check out some new screens.

Call of Duty: Ghosts Confirmed For The Wii U, Launches November 5