It appears that developer DICE LA, who is now in charge of the health and well-being of Battlefield 4, is rewarding participants of their Community Test Environment with an exclusive soldier camo.

Called “CTE Specialist,” the camo appears all black. You can see it in the image below, courtesy of DANNYonPC: 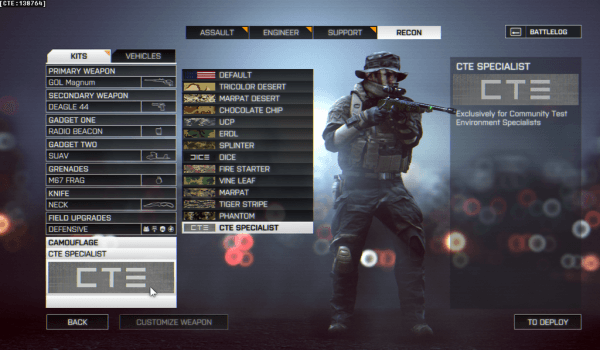 The CTE has been producing some pretty positive test results for Battlefield 4 since its inception last May, a number of which have already been applied to Battlefield 4 and are event trickling over to Visceral Games’ Battlefield Hardline, launching early next year.

Currently, the test environment is now entering its second initiative with Core Gameplay Patch 16 for Premium users on the PC who decide to take part. According to “undeadpixels” on the Battlelog forums, it contains a number of weapon balance updates, as well as Battlefield Hardline beta crash fixes and system improvements that are now being introduced to Battlefield 4.

Check out the full notes below, courtesy of Reddit user pm_me_spread_legs (via @antal120):

This is what is included in this patch:

Goal: With the changes to visual recoil, head flinching and netcode weapons have become deadlier and kills faster. Tune weapons to take this into consideration and find clear roles for them in doing so.

A large amount of guns had some small changes made to them. I am trying to not go too crazy at first as so many moving parts could create a problem.

I’d like to get some blind feedback on these changes so I will not be describing every tweak right now. I’m sure symthic will post the info eventually, or I will after some initial feedback.

Most of these changes are based on community/pro feedback that I thought was a great starting point. Here is a list of what has been tweaked, some buffs and some nerfs. None of these changes will be reflected in the stat bars or text descriptions as of yet!

This effort is far from over so give it a good test and I’ll be looking for everyone’s feedback. I am also still waiting for some new code jjju is working on to remove the flinch-bug and finish up the changes to suppression.

Again, these aren’t changes that will make an appearance in the core Battlefield 4 experience, but are just some of the improvements DICE LA are testing with participants of the CTE.

We’ll be sure to let you know when we hear more about Battlefield 4’s next official update.

No Man’s Sky Will Come to PC After All, Just Later

PC Arena Shooter From Reakktor Studios, Toxikk, Is Bringing FPS Back to 1999