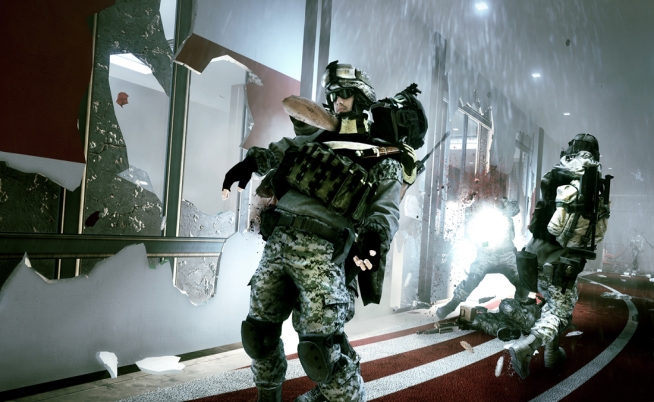 Update: Close Quarters will feature a new game mode called Conquest Domination; however, Rush might not be a part of the expansion pack. Learn more here.

Since the announcement of Close Quarters, some fans feared that the expansion pack will not include the two game modes that Battlefield has become renowned for, Rush and Conquest. Of course, a leaked image of one of the new maps didn’t ease the concerns. Fear no more, as Patrick Bach has confirmed to Digital Trends that “classic game modes [Rush and Conquest] will be a part of this expansion pack.” Also, in terms of new weapons, seven of which were spotted, Bach said, “we’ll release that [the full list of weapons] as we get closer to it, but there will be the SPAS 12–the Italian shotgun–which is a classic shotgun that people have seen many times before, and there will be a lot of other guns. The important thing is that we’re doing these guns and spreading them over all the classes, and of course you can then bring them back into your original game. So it actually extends the other maps of Battlefield 3.”

However, the new expansion pack will not support 64 players on PC. Bach explained, “No [64 players on PC], we are restricting players. I can’t tell you exactly what the restriction is right now, but we are restricting players so we can focus on the fun factor. How many players do we want before it turns into carnage?” It is stated on the official page for Close Quarters that the player range is 2-16, but DICE hasn’t officially announced if both the console and PC versions of Battlefield 3 will share the same player count.

On the topic of private servers for consoles, Bach assured that it will be similar to the PC implantation. He noted, “we’re going through a lot of practical processes to get it out, but it is a full rent-a-server program. You as a player can rent your own server. You can do all the setting yourself, you can invite whoever you want, or you can keep it open to everyone. You control it. This is the first time we’ve seen this on a console. We were quite surprised that no one has done this before. It’s a special feeling owning your own server; having control over it and making sure that you have all the settings–and you have all the information that you think the players you want to invite–are there.” He added, “I think the biggest difference [between PC and consoles] when it releases is that it will be easier for console players to rent a server than it is for PC gamers today because we don’t have an in-game interface. But for the console you get everything in front of you at the main menu.

“Well we do pay attention because people bring it up all the time,” Bach said in reference to how the press and fans pit Battlefield and Call of Duty against one another. However, he went on to distance Battlefield by saying, “We don’t see ourselves as the direct competition to the other shooters on the market, because there aren’t many shooters that are trying to do what we are trying to do. If we try to limit ourselves by trying to build something that is in my book lesser, a lesser experience, even if people say that they like it, and say that they like this particular part of the experience, that is not what Battlefield is all about. Then we shouldn’t call it Battlefield, we should call it something else.” He concluded, “If you don’t have the vehicles, if you don’t have the structure, if you don’t have the team play, if you don’t have the classes, then you’re breaking it. I hope that people that are playing Battlefield 3 and are playing other shooters can see that it’s not the same. If you are into shooters, and you play shooters, you will definitely spot the difference.”

In case you missed it, be sure to read Alan Kertz comments on Lack of DLC and Why DICE Avoids Platform Favoritism.