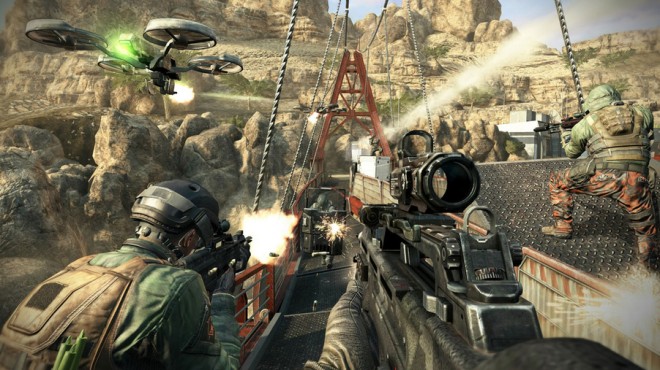 Straight out of this year’s Gamescom, we get an in-depth look into the multiplayer of Treyarch’s upcoming Call of Duty: Black Ops 2.

We’ve got it all – weapons, attachments, perks, equipment, wildcards and scorestreaks. As hinted in the recently released multiplayer trailer, Black Ops 2 will be adopting a slot-based create-a-class system that will allow players to mix and match their weapons and abilities within the 10 slots given to them.

Also noteworthy is that Killstreaks are now called “Scorestreaks” and are achievable by scoring certain amounts of points. Of course, this most likely includes capturing objectives or completing certain goals on top of simply killing the enemy.

Keep in mind that, though this list is thorough, it is based off the first public build of the Black Ops 2 and, therefore, could still be tweaked before release this November 13th.

Check out the list of multiplayer goodness below and don’t forget to let us know your thoughts in the comments!

Check for updates at the bottom of this page.

Big thanks to The Verge for putting this list together.

Treyarch game design director David Vonderhaar confirms that this build is currently in the Alpha stages:

The game is at alpha. That means we are just now starting to tune and polish all of the gameplay systems. Way more to come… stay tuned.

A number of additional features have been confirmed.

Thanks, CharlieIntel, for the round-up!

No pro perks in Black Ops 2. They offer small upgrades and only impact you and never your weapon.