Earlier this week, the first sightings of Call of Duty: Black Ops 2’s first DLC were reported thanks to a promotional poster that was displayed prematurely at a GameStop retailer.

According to the poster, the DLC, titled Revolution, would come packed with four new multiplayer maps, one new zombie map, and a new weapon. You can read more about it and check out the poster here.

While it still has yet to be officially announced by Activision or Treyarch, Call of Duty’s mobile website seems to have mistakenly confirmed the DLC earlier today. For a brief period of time, the title “Call of Duty: Black Ops 2 Revolution” was on display on the front page, shown below. It has now been removed and instead features the an older trailer. 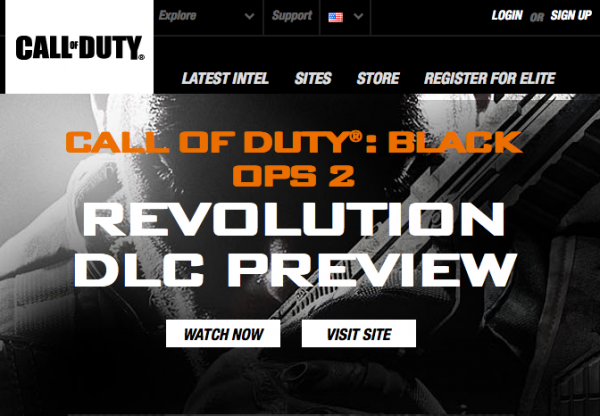 Additionally, CI was recently sent this banner by an anonymous reader clearly displaying the DLC title, as well a couple of soldiers and zombies.

The incoming Black Ops 2 Revolution DLC, if legitimate, is reported to release on January 29 and will most certainly come included in the Black Ops 2 season pass or at $15 USD or 1200 MS Points for non-season pass holders.

Lastly, a user on the Call of Duty forums has allegedly gotten a hold of information regarding the Zombie map, Die Rise, including three new achievements or trophies that are rumored to be included in the Revolution DLC. These should be taken with a grain of salt, however, as nothing has yet to be confirmed.

He went on to describe the map, which you can read in detail right here.

Keep your sights on MP1st in the coming days for more Black Ops 2 DLC details!