Setting things up, Lamia explained that Black Ops 3 is “primarily” set in a dark and gritty future, as depicted in the official reveal trailer that launched earlier today. As was the case with previous titles in the Black Ops series, he hinted that the future might not be the only timeline that is explored in Black Ops 3’s Single Player Campaign.

On that subject, Black Ops 3’s Campaign is built to be more open-ended than ever before with multiple approaches to tackle either solo, or with three other friends online. Though your squad is always with you throughout each mission, any character can be replaced with a real player that progresses through ranks and unlocks weapons and abilities. Due to the larger-scale battles, AI had to be completely reworked, said Lamia. Enemies will now react differently to your actions and are more goal-oriented.

While the game’s campaign is still its own separate mode, Black Ops 3 will boast the highest degree of integration between all three modes; Campaign, Multiplayer, and Zombies. In fact, game development started flat, Lamia says, without distinction between the three modes. Vonderhaar elaborated, saying that it was the studio’s goal to make switching between each as fluid as possible, which is accomplished through a completely redesigned menu. He added that a better part of the  game’s ongoing 3-year development cycle was spent designing features and gameplay mechanics that weren’t exclusive to just one mode.

Like Single Player and Multiplayer, Zombies will also include character progression, though Lamia wasn’t willing to get any more detailed than that. However, he promised the most ambitious Zombies experience yet. 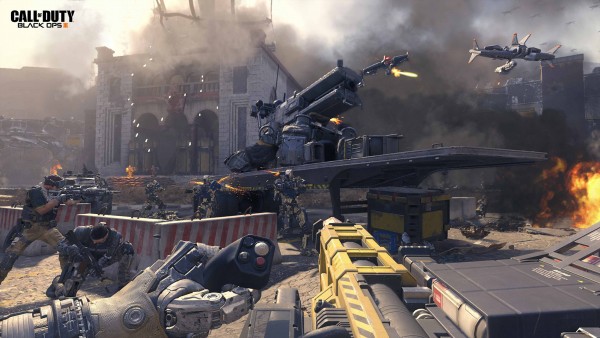 While competitive multiplayer might appear as complex as ever, Vonderhaar stressed the importance of going back to basics. “Lanes, lanes, lanes, frames, frames, frames,” he said. Keeping players in a lane and keeping all the action within a players frame of view has become an unbreakable rule at Treyarch. All maps in Black Ops 3 will play off this philosophy of three lanes which will hopefully ensure that the player feels in control of the action at all times. Though verticality will be factored into gameplay, buildings won’t be much higher than two stories so that players don’t feel like they’re constantly getting shot from off screen.

The Specialist is a brand new idea to Call of Duty multiplayer that Vonderhaar says sits somewhere in between your Create-a-Class Loadout and powerful Scorestreak rewards. Activated via the press of both bumpers (on an Xbox One controller), a player can call upon a unique class-specific ability or weapon determined by a Specialist character that is chosen before each match. Players can use these abilities every few minutes by building their “Core”.

Each Specialist has their own unique character and back story and can be upgraded over time. Of note is that the new system is applied in addition to your Loadout and Weapons, essentially giving you three branches of character development to progress through.

Call of Duty commentator Drift0r put together a pretty informative video on the subject.

The Gunsmith, Camo, and Paint Job features will allow players to greatly customize basic weapons by turning them into their own personal Variant that can be saved for use in the Loadout selection.

Camo patterns are still unlocked normally which can be applied to the base of your gun, but an additional layer of paint can be modified and applied on top of it. Vonderhaar explained that each side, as well as the top and bottom of a weapon can be painted, offering a large amount of personalization with 64 different layers to play around with.

Inside the Gunsmith editor, attachment variations can also be placed onto weapons for a more personal touch. According to Vonderhaar, you’ll be able to select from a number of different grips, for example, all which perform the same function, meaning you won’t have to worry too much about altering your weapon’s stats; it’s purely cosmetic, he says. Lamia, who was pretty excited about the feature, said that players will be able to apply up to 6 attachments to their weapon in either Campaign or Multiplayer, if they wanted to. Of course, you’ll use up most, if not all, of your loadout points doing so.

Vonderhaar stressed the importance of creating a fun multiplayer experience, which he believes can be achieved in any competitive environment that is balanced, so both casual and competitive players should find something to love in Black Ops 3.

In line with the game’s darker tone, you may have noticed that dismemberment is back, along with a healthy serving of blood splatter. Though it’s a returning, fan-favorite feature that defined Call of Duty: World at War’s gritty setting, Vonderhaar says it’s also a great way to emphasize impact and to improve the “feedback loop” during combat. 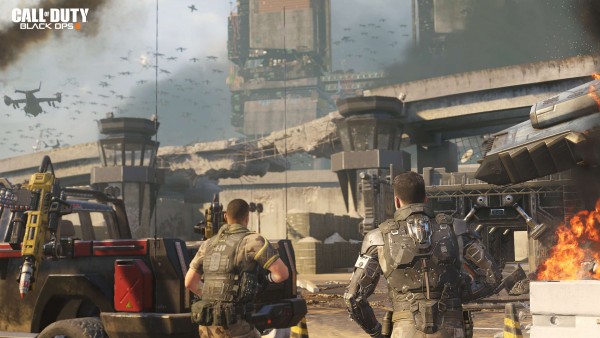 In closing, Lamia and Vonderhaar talked about the studio’s first project on a three-year development cycle and how the extra wiggle room afforded developers the time to experiment, make mistakes, and fail. It gave designers a chance to entirely remove core features from the game in order to fully understand their importance and make the cuts or improvements where necessary.

Lamia says, in the end, Black Ops 3 will be the “deepest, biggest game ever” in the Call of Duty franchise.

As for Theater Mode? To answer Jericho’s question, all Lamia had to say was, “dude, are you at Treyarch? Alright. We’ll just leave it at that.”

Call of Duty: Black Ops 3 is coming to Xbox One, PlayStation 4, and PC on November 6. Multiplayer will be playable at this year’s E3 as well as in the upcoming multiplayer beta that is scheduled to launch one to two months before release.