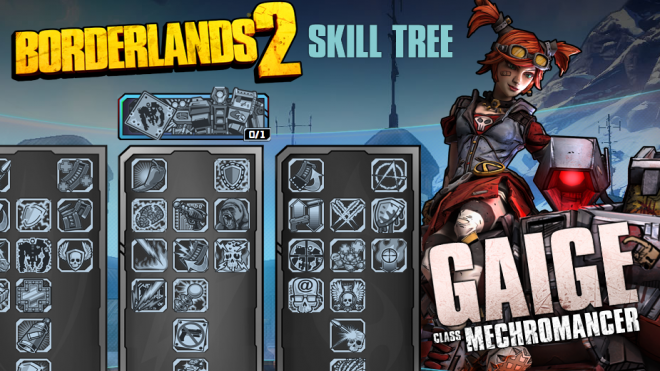 Wondering what the upcoming DLC character, Gaige the Mechromancer, has to offer to the already versatile character play styles of Borderlands 2?

Look no further. Gearbox Software has listened to the community and recently released the skill tree for their upcoming DLC character. Check it out right here!

For those of us who wanted to play as the fifth playable character of Borderlands 2 or were on the fence to purchase it, this recent reveal of her skill tree is a great way to know what exactly this mysterious character class is capable of. It’s also a great way to plan a head and help decide what what type of build you want to create.

In case you missed it, Gearbox Software has also recently released the first ever in-game images of Gaige the Mechromancer and her robotic companion Death-Trap, including her latest Echo Log, which can be found here.

Gaige the Mechromancer is set to be released next week, on October 16th and will cost you $10.00 USD. If you’re a member of Borderlands 2 Premier Club, Gaige will be available to you at no extra charge.

In other, perhaps more exciting news, Gearbox Software president Randy Pitchford recently Tweeted, “There may be a big surprise from us within the next 24 hours or so. Stay tuned!” Keep your sights on MP1st to find out whats in store for Bordlerlands fans.

With Gaige the Mechromancer’s skill tree revealed, how are you guys going to spec her? Sshare your builds by posting the share link of your build in the comment section below!