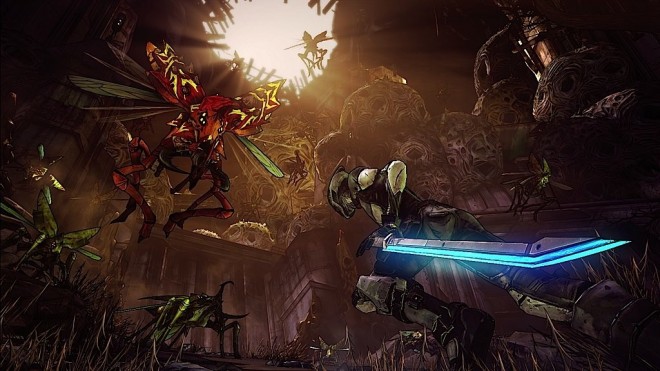 With the release of Borderlands 2 approaching it’s release date of September 18th, Gearbox Software shows off some brand new gameplay during this year’s Comic-Con event.

First off, we take a look at gameplay featuring a new and improved Sanctuary:

Here’s a quick run down of this new video:

Since the release of Borderlands on October 20, 2009. fans have been pitching their ideas when it comes to improvements that could be implemented in the next installment of the series. Lucky, Gearbox Software has been listening and has announced a new feature making its way to Borderlands 2 called “Stash.”

Stash is a feature that allows players to share all of his/her loot and ultra rare weapons that they have collected during their journey on Pandora with all of their characters. This means that your powerful level 40 character can share some of it’s ultra rare weaponry with their level 2 weakling to make the task of killing enemies found on Pandora much easier.

In case you missed, here’s a look at Borderlands 2 recent “Wimoweh” trailer.

Borderlands 2 is available for pre-order now, at your favorite retailer, and is set to release on the Xbox 360, PS3 and PC on September 18th.