by Tim Villasor
in News, Videos

More Borderlands 3 content is coming, as 2K and Gearbox Software have announced that they are releasing the Bordelands 3 Director’s Cut DLC this coming March 18! This downloadable content will include some nifty new premium items, vault cards added for players to grab, new missions, and a new raid boss to fight against and more!

The news was unveiled via the Borderlands Show’s latest episode, with the reveal shown in the video below.

Here’s the details on the brand new DLC coming up next month.

“Director’s Cut” launches March 18 and will be available individually or as part of Season Pass 2.The add-on features an enticing variety of content, but the headline act is its brand new raid boss: Hemovorous the Invincible, an absolutely titanic Varkid lurking behind a door on Pandora that’s been locked since Borderlands 3 launched. Only the fiercest big game hunters have a chance of kicking her chitinous butt in the pursuit of top-tier loot. Better consider your tactics, refine your build, and bring some friends. Oh, and be ready to get caked in Varkid guts—it’s going to get messy!

“Director’s Cut” also includes a series of murder mystery missions, featuring brand new locations and a novel crime scene analysis mechanic. Ava is convinced she has a lead on some potentially supernatural slayings and has decided to document her findings in serialized podcast form. Consider yourself her gun-toting co-host as you investigate strange happenings on Pandora, Promethea, Eden-6, and Nekrotafeyo in search of answers (and loot), with help from some familiar faces. Eagle-eyed Vault Hunters may even uncover teasers, hints, and secrets that tie back to the main story. 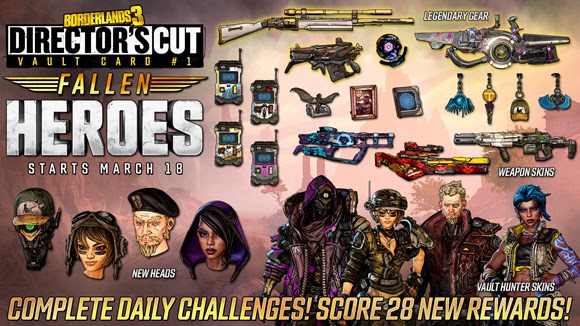 In addition, “Director’s Cut” will give you access to three Vault Cards, which are your ticket to upcoming bundles of themed loot! When you play with a Vault Card active, you can work to level-up the card by completing daily and weekly challenges. There’s a selection of over 100 unique challenges to pull from, so you never know exactly what each day and week may bring. Gain enough progress and you’ll unlock a massive cache of themed cosmetics, plus some supremely powerful gear that scales to your level.

The first of the three Vault Cards, which will launch as part of “Director’s Cut,” features items that honor some of Borderlands’ most beloved fallen heroes; the remaining two Vault Cards are scheduled to launch by the end of 2021. Vault Card content doesn’t expire, and when multiple Vault Cards are available, you’ll have the option to select which one you want active at any given time.

And finally, the “Director’s Cut” add-on delivers a treasure trove of never-before-seen behind-the-scenes content. You’ll get a peek into the development of Borderlands 3, from bloopers to cut content, and have access to a gallery showcasing concept art, storyboards, lost maps, and tons of footage that charts the game’s development.

The Disciples of the Vault

Gran Turismo Sport Has 9.5 Million Players According to Kazunori Yamauchi

Gran Turismo Sport Has 9.5 Million Players According to Kazunori Yamauchi