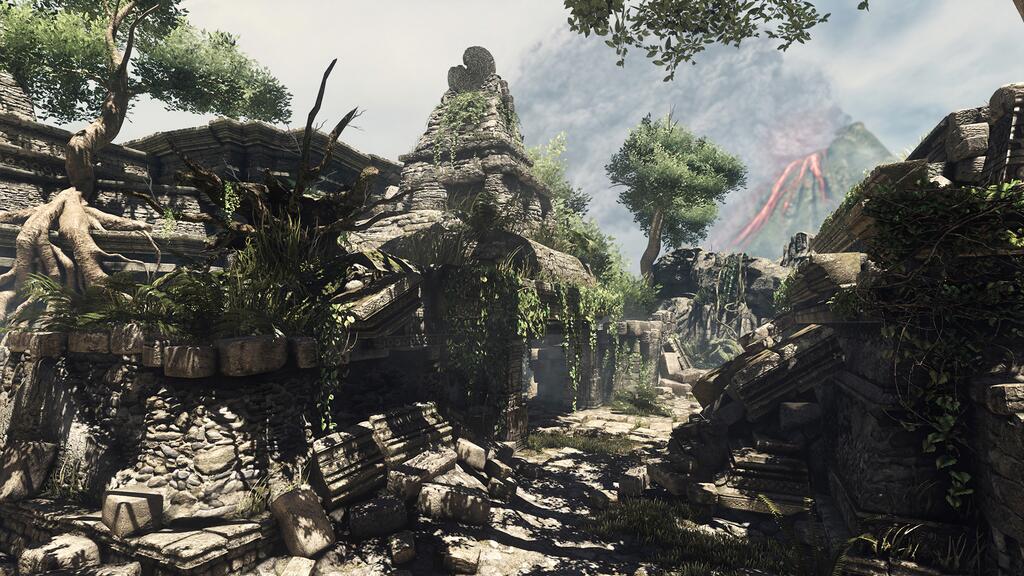 Keeping in line with the game’s previous add-on, Onslaught, Devastation’s maps take a more colorful and light-hearted turn away from Ghosts’ more gritty, sombre tone. It keeps the fun value up and the excitement high.

There’s a bit of everything in Devastation. From the close quarters action of Unearthed, a reimagining of Modern Warfare 3’s fan-favorite map, Dome, to the long sight lines and open corridors of Ruins, there’s enough here to satisfy SMG, assault rifle, and sniper rifle users alike. Both Behemoth and Collision also offer variety in unique locations like atop a gigantic earth excavator or a wrecked cargo ship that has collided into a large bridge, respectively. Both are small-medium in size and are fantastic for those who prefer more symmetrical layouts and competitive objective-based matches. My personal favorite? Ruins. It’s something that’s never been done before in a Call of Duty game and it sure is pretty to look at.

Thrown in for good measure are a few interesting easter eggs, like the ability to turn into the Predator on Ruins, as in the one from the Arnold Schwarzenneger movie – claws, shoulder-mounted rocket launchers, thermal vision, invisi-cloak, and all. Just like the film, he even goes out with a bang when faced with overwhelming firepower. Extinction fans will also have plenty to look forward to with a couple of weapon and alien cameos in Unearthed. You can catch a quick look at the secrets both Ruins and Unearthed hold in the videos below. Be sure to stay tuned to the end of each.

Side note: you’ll see a lot of fumbling around with the Predator as I struggled to learn its controls, so bare with me!

If you’re a Call of Duty: Ghosts Season Pass holder on Xbox Live, then you’ve already had the chance to field test the new “Ripper” hybrid weapon that serves as both a SMG and an assault rifle. Getting caught up in the spirit of the 2014 Call of Duty Championship, I stuck to more familiar weapons during my hands-on time with the new content, so you’ll see a lot of Honey Badger, Remington R5, and even some USR action in the gameplay videos below.

Lastly, while my team and I didn’t get very far in Extinction Episode 2: Mayday, we certainly did a good job of scaring off that monstrous “Kraken” alien. We didn’t fare so well against the new “Seeder” enemy types, however.

Check out all five maps below and let us know what you’re most looking forward to in the comments! Call of Duty: Ghosts Devastation drops this April 3 for Xbox Live members.