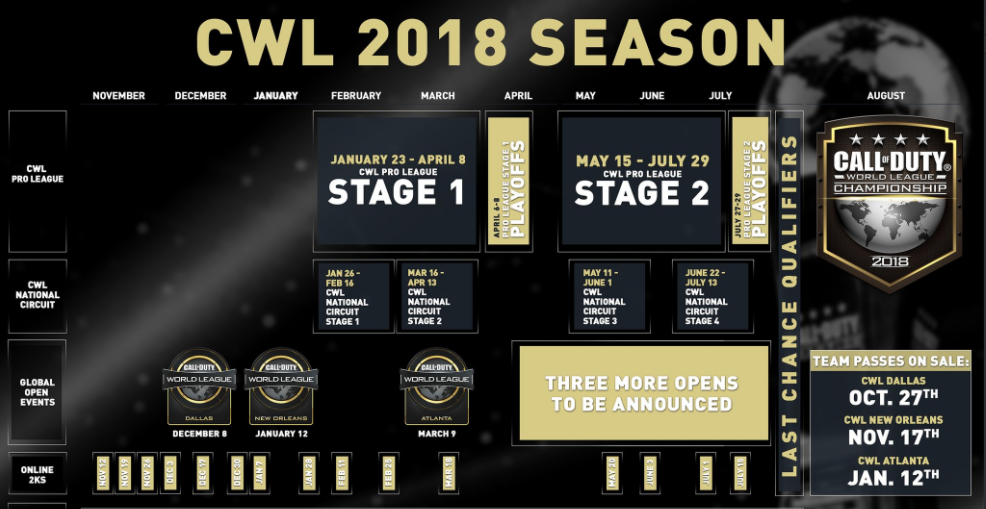 Yesterday, Activision announced that we’ll know more about the Call of Duty World League 2018 season today. Well, today is here, and true to their word, we know a fair amount of info.

In a press release, Activision has announced that there will be a new CWL National Circuit, and the event will feature the largest prize pool in Call of Duty eSports history with a cool $4.2 million! The CWL Pro League competition, which will determine tournament seeding will kick off this January 23, 2018.

This season will introduce the CWL National Circuit, composed of eight online leagues in Australia, Canada, France, Italy, Germany, Spain, UK and US. Throughout the four stages of online competition, teams will compete for CWL Pro Points, travel and accommodation to a Global Open and, in the final stage, entry to the Last Chance Qualifier for the 2018 Call of Duty World League Championship.

The Call of Duty World League 2018 season will officially start online on November 3 when Call of Duty: WWII is released, with regional ladders MLG GameBattles available on launch day for North America, Europe and Asia-Pacific.

Check out the bulletpoint announcement below straight from the presser.

For further details on the new season of the Call of Duty World League:

Do you want to see more Call of Duty eSports coverage here on MP1st? If so, let us know in the comments.

Gran Turismo Sport Sells Over 150,000 Units in Its First Week Out in Japan

The Division Down for Planned Maintenance for Approximately 2 Hours