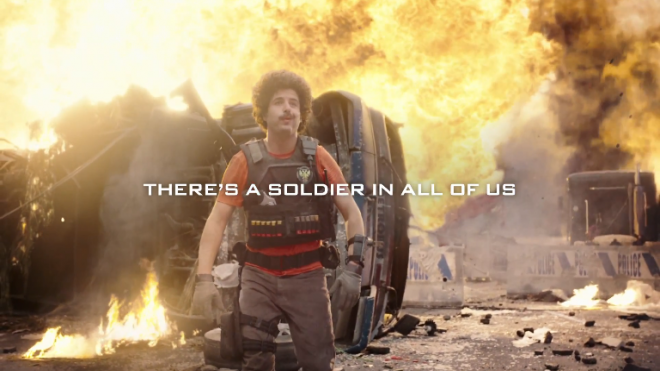 Call of Duty: Black Ops 2 gets yet another trailer, this time in the live-action-style directed by Guy Ritchie. Activision also brings on a number of big names to the screen, including Robert Downey Jr. and YouTube Star, FPSRussia.

About the Action Movie FX App:

To support the launch blitz, Activision teamed up with Bad Robot Interactive to release a Call of Duty takeover to Bad Robot’s mega-hit Action Movie FX app, which is a free download available now on iPhone and iPad.  The app enables fans to film real world environments with their phones, only to bring mayhem to them using Call of Duty: Black Ops II near-future weaponry.  Additionally, fans can use the scan function in the app, to unlock and unleash exclusive new weapons for use in the app from the upcoming game.

Call of Duty: Black Ops 2 releases November 13 on the Xbox 360, PC and PS3. You can catch our full preview of Black Ops 2’s multiplayer right here!

What did you think of this brand new, live-action launch trailer? Did any of your favorite movie stars make it in?