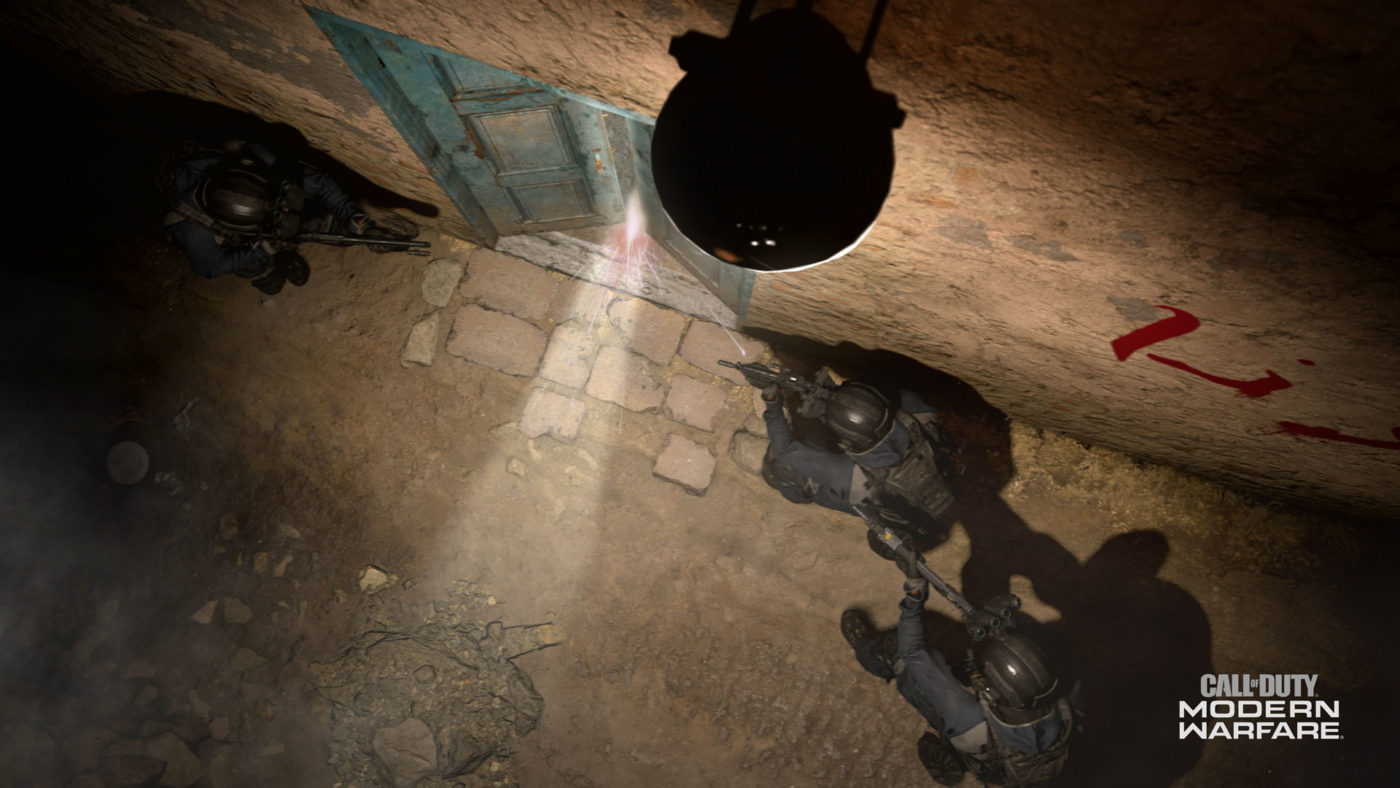 With just a month out before the Call of Duty: Modern Warfare beta kicks off, Infinity Ward is now ramping up details on Modern Warfare’s multiplayer. Today, the studio goes in-depth regarding some of the game’s new features, which includes Modern Warfare executions, recoil, and lots more.

Check out the condensed version highlighting the major info, or read up on the entire thing here.

There are four ways to to interact with doors in multiplayer:

Gun mounting in multiplayer is a contextual technique in ADS. It will help in handling recoil.

The Infinity Ward team “worked on the new Mount system that works both vertically and horizontally. It really allows you to ‘pie’ a room.” You can go up to a door frame, and “you don’t so much as lean around a corner, as rest your hand on the edge and can use that now as a pivot point.”

Modern Warfare will introduce Tactical Sprint, which is  “a burst of extra sprint; the weapon comes up, and is positioned differently compared to the aim, when you’re moving fast and traversing scenery.”

Geoff Snith (Multiplayer Design Director) remembers Night Vision back in the original Call of Duty® 4, “but it was a screen overlay, and this time it is true night vision, so we started to go crazy, and made completely black maps. We playtested them, fine-tuned them, and after a while we came to a middle ground where we positioned lights along hallways and at doorways, and you can turn on or off lights in some cases, which leads to cat-and-mouse confrontations. You can turn on lights to blow out your [opponents’] NVGs, and there are other things we’re working out at the moment, but there are several maps that are ‘dark’ versions.”

Joe Cecot (Multiplayer Design Director):We learned from [our military consultants] that you can’t cheek your rifle with these big goggles on, so we implemented a half ADS, but because your enemies also have goggles on, they will see your laser sight.” This leads to many players taking a minute to choose when they want to ADS. “It feels like you won’t be accurate when you’re shooting like this, but you will be. It creates gameplay where you don’t want to ADS too much. You have to use it really tactically.

There’s a “Realism option” in Modern Warfare with minimal HUD. Infinity Ward says, “You have to see or hear the enemy drop to figure out whether you’ve taken them down,” and that it has a “horror movie” vibe to it.

Infinity Ward: We wanted to bring back the fan favorites, but also not rest on our laurels. We wanted more defined Killstreaks, with some basis in reality. This includes bringing a drivable vehicle into the game [the Infantry Assault Vehicle], with a second access point [turret] that another player can hop onto. There was also design direction away from simply pulling up a mini-map and calling ordnance on any space in the game world. That gives you too much range. In this game, if you pull up the binoculars, you have to get line of sight; you have to get to a good vantage point to call in a particular Killstreak for it to be effective.” The team strove for balance, likening a Killstreak to a “boss fight”, with all parties being entertained; even those on the receiving end.

Infinity Ward explains why it moved away from the scorestreaks system popularized by Treyarch, and states:

We felt that in some games, Scorestreaks tend sometimes not to be clear; ‘if you’re in this mode a Scorestreak is 50 points, but if you’re in another mode, that same Scorestreak is 100 points’.” This led to players disengaging. Compare that to the Killstreaks of previous Modern Warfare games: “You knew that when you had four kills, you were one away from a Predator missile, and your heart starts pounding, and you’re nervous, and we felt that had gone away to some extent, so we went back to Killstreaks.”

Modern Warfare match map intros are called Infils (Infiltrations), and will have different variations. Players will be able to see teammates flying in choppers, coming in on the back of a truck or van, and more.

Infinity Ward explains executions in Modern Warfare (which we know will be customizable). “If you run up behind somebody and you press the Melee button, you’ll take them out. But if you hold Melee, you’ll complete an Execution, whether they are standing, crouched, or prone. It’s a fun little show-off move.” It’s also been confirmed that each Operator will have their own specific attack too.

According to Infinity Ward, recoil in Modern Warfare is treated as realistically as possible, while giving the weapon wielder as much control as possible.

“Recoil will have different patterns, and you can counter recoil using your thumbstick. But when you release the thumbstick, in the past you may [have ended] up looking at the ground.” To combat this, Infinity Ward implemented an interesting little trick: “We negated that thumbstick offset, so recoil is far less annoying. However, different guns have different recoil patterns to learn and offset.” Joe confirms: “All of our recoil is a learnable pattern.”