It seems that the official Call of Duty UK website has revealed the Black Ops 2 Season Pass.

According to the website, it doesn’t look like this season pass, detailed below, has anything to do with Activision’s Call of Duty: ELITE service.

What it does cover is the season of DLC that will be made available for Black Ops 2.

THE ULTIMATE WAY TO GET MORE OF CALL OF DUTY®: BLACK OPS 2.

**Season Pass and DLC Map Packs may not be available on all platforms or in all territories.  Pricing and release dates may vary by platform. Call of Duty: Black Ops 2 game required; sold separately

For those wondering, £34.99 translates to roughly $55.00 USD. The questions is, is this on top of a paid ELITE Premium service or not? Hopefully, we’ll find out in the coming days.

Oddly, the text on the website appears to be incomplete and hard to read due to the dark background. 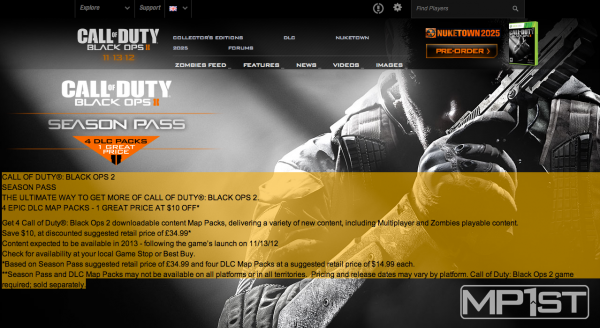 The homepage displays a heading reading “ELITE Free,” suggesting the ELITE service may be initially free, while users have the option to only pay for the season of DLC – similar to the ELITE vs ELITE Premium model that Modern Warfare 3 adopted. What is unclear is if the supposed “ELITE Free” will include similar features to the current ELITE Premium, but without the DLC.

What are your thoughts on this slightly different approach to Call of Duty DLC?