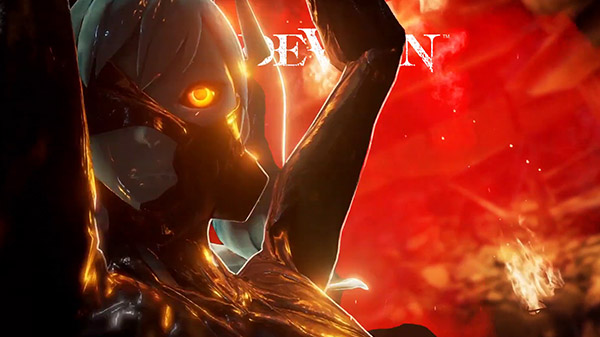 In their latest Code Vein trailer, developer Bandai Namco Entertainment have detailed the Invading Executioner boss. This boss was part of a demo that press were invited to play last year, but that doesn’t make this boss any less terrifying or difficult. Check out the trailer below and read on for more details regarding the Code Vein Invading Executioner Boss.

In the trailer it’s easy to see just how difficult the Invading Executioner boss is going to be to fight. Her moves push her closer and closer to the player, until she’s able to deal devastatingly high damage to them in short bursts. A diving plunge attack allows her to travel quickly towards players, damaging them in the process, while an AOE attack will create a huge explosion around the player if they get into her mid-range.

As has been shown in press event previews, this boss can also perform dancing moves around her weapon, spinning so fast that she creates a tornado effect, which pulls players in and damages them.

As with many bosses in the soulslike genre, the Invading Executioner boss has a few different phases, which she will cycle through as her health decreases. Each phase is different, and while not necessarily harder to fight, the change in style and pace is often enough to throw off even skilled players.

Mercifully Code Vein will have multiplayer when it launches. Players are also able to take an AI companion with them into battle. But by taking another real world player they stand a better chance at defeating the Invading Executioner boss, and every boss in the game.

The Invading Executioner boss varies from other bosses that have been shown from Code Vein so far, because she is a close range boss. Other bosses, such as Ribcage, have devastating AOE attacks that they use to their advantage as players back away from them.

The diversity between bosses in Code Vein is proving to be one of its key selling points with soulslike fans. Games such as Bloodborne and Dark Souls have bosses with a certain formula which players can count on. Due to the unique mechanics of Code Vein, using AI companions for both assistance in battle, and healing, players will find themselves working much harder to keep everything under control in the middle of battles.