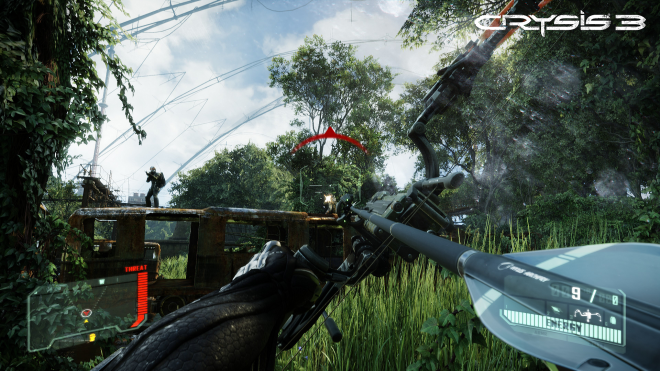 Yesterday, we told you that Crytek wants to melt your PC. Today, we’re going to show you how.

In a follow-up to yesterday’s reveal of Crysis 3’s minimum, recommended and high-performance PC requirements, PC gamer has learned how you’ll be able to tweak Crytek’s upcoming graphical power-house with its advanced graphical settings.

If you remember, Crysis 2 only shipped with minimal graphics options, including v-sync, game resolution, HUD bobbing, and a general quality setting – options which were later expanded in a patch. This time around, Crytek will be shipping Crysis 3 with plenty of options as well as high-res textures right off the bat on the PC. Among the options below, some new additions include lens flares and anisotropic filtering. Check it out:

He went on to explain some of Crytek’s technical goals with Crysis 3: “One of our big goals was to improve image quality, and a lot of work went into developing several DX11 based anti-aliasing techniques for PC, which means gamers will now be able to pick their favorite—this is relatively involved on a deferred-based engine, since it involves selecting every technique and accessing multi-sampled buffers, versus the usual ‘flip the switch’ approach. On top of an improved tessellation system we’ve also introduced character/vegetation tessellation—and since tessellation performance was still not optimal for the level of detail we wanted to achieve, we also did research into different areas and introduced what we called ‘Pixel Accurate Displacement Mapping’ for macro details with nice real-time self-shadowing.”

In Crytek’s latest gameplay demo video of Crysis 3, you’ll most like have noticed some impressive grass. Yes, grass. It turns out, much effort was put into “grass-tech” in Crytek’s studio. Corbetta explains, “this tech allows us to visualize thousands of individual blades of grass, and is very cost and memory efficient as we can even achieve good results on older console hardware like 360 and PS3. One of the most important things is that this technology is improving gameplay. For example, you can see AI aliens running through the fields and bending individual blades of grass, and things such as projectiles, explosions and wind affect grass movement too. This gives a ‘predator-style’ gameplay experience in the Fields level, which is very in line with the experience C3 wants to offer. There are not many other games that can offer this kind of realistic grass simulation and rendering on a multiplatform basis.”

Are you excited to roll around in some grass – I mean, shoot some aliens in Crysis 3 this February, 2013?