There’s no denying that Destiny 2 is a commercial success for both Activision and Bungie. However, it seems the game might not be quite living up to the expectations of Destiny 1. Since launch, the Destiny 2 player count has dropped by over two million according to Destiny Tracker.

At launch, Destiny 2 peaked at around 3.5 million players, with over 1.2 million playing at the same time at one point. However, checking Destiny Tracker, you can see the massive dive the game has gotten the past few days. Check the graph below. 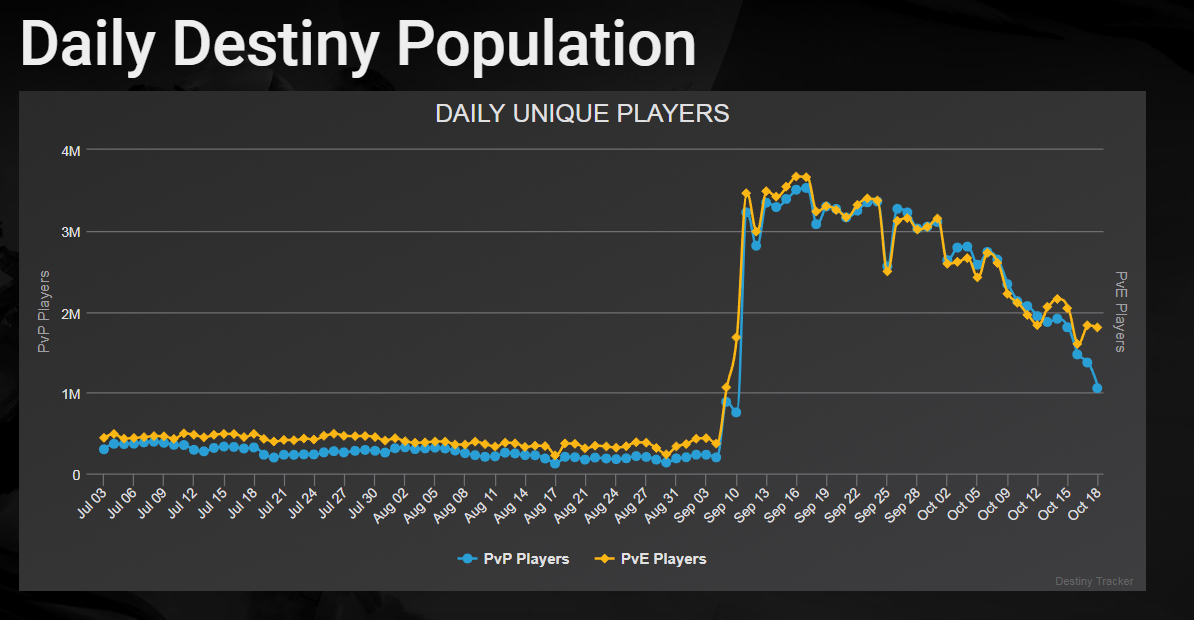 Important to note that we don’t know how accurate the Destiny Tracker site is given it’s not an official tool of Activision or Bungie. The graph shows that at launch, Destiny 2 reached 3.5 million players on September 16 (average of PvP and PvE), and has steadily been dropping ever since. Over the past few days, it has since dropped to as low as 1.5 million on October 19 — a full two million drop in less than a month.

Does this mean Destiny 2 is fading? We can’t say for sure, but there is a glimmer of hope though, Destiny 2 will be launching on PC for the first time next week, which should see a significant uptick in terms of both sales, and people playing Bungie’s multi-million dollar shared-world shooter.

For more on Destiny 2, check out the latest game update rolled out by Bungie earlier today.  There’s also a change on this week’s Nightfall Strike based on player feedback,  and finally, the Leviathan Prestige Raid has been finished by a team using an exploit.

Do you think Destiny 2 is in trouble or is it just a case of players taking a break before diving back in once the first expansion drops?

Call of Duty: WWII Scene Modified for Australia Due to Sexual Violence

Call of Duty: WWII Scene Modified for Australia Due to Sexual Violence