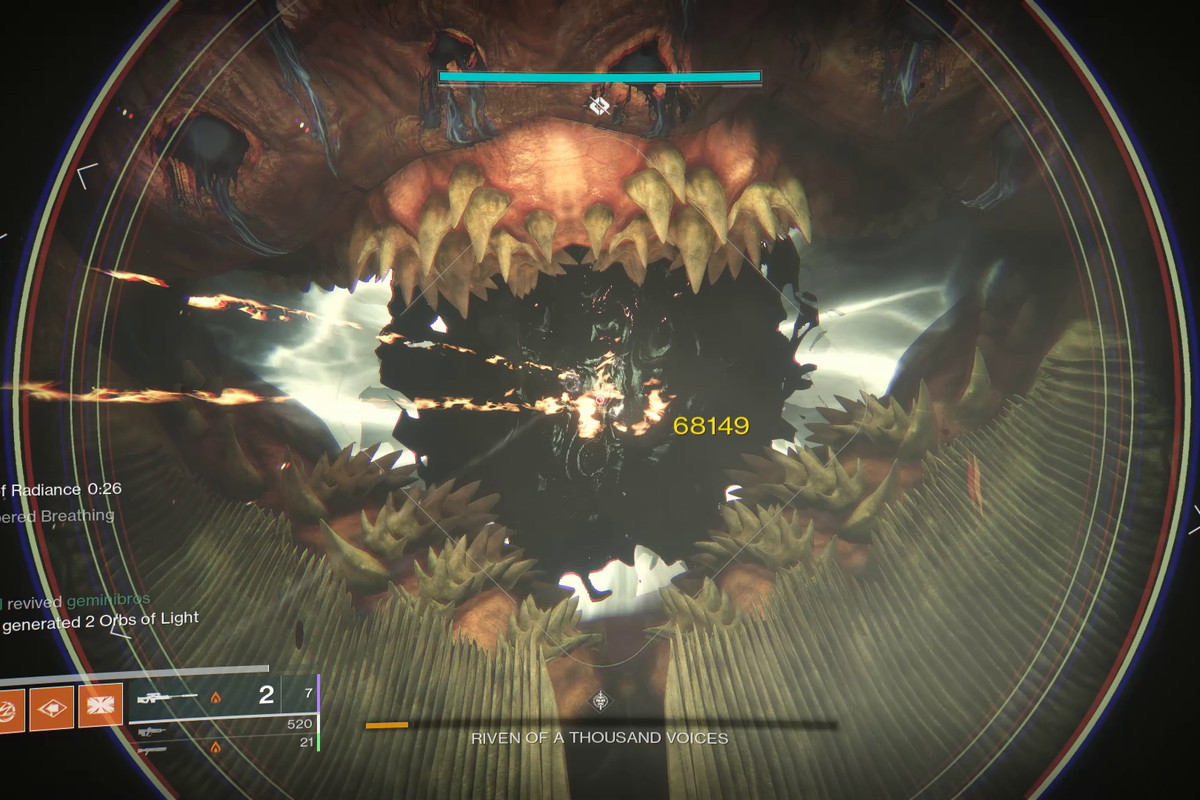 Let’s unpack what this news actually means. Riven is the boss of the Last Wish raid, a six player activity in Destiny 2 that has been widely regarded as one of the toughest activities out there for a while. Prior to encountering Riven, players must fight though a series of bosses and puzzles, all of which culminate in the Riven boss fight, which has several of these mechanics mixed into it. As you can imagine, this doesn’t make Riven a pushover exactly.

The encounter with Riven alone usually takes place over four floors, with the final floor being the location where you defeat her, and claim your rewards. Riven has been defeated by solo players before, over the course of this encounter, but never before on the first floor, which is what makes this world first so impressive.

The player in question, Unknown573 on Reddit, is clearly a very high Power Level, because they destroy all of the enemies in the encounter, including Riven, with relative ease. That’s because the Last Wish raid isn’t quite the peak of difficulty that it once was in Destiny 2.

When Destiny 2 Forsaken first launched, the Last Wish raid wasn’t available. After a few weeks it was released by Bungie, and completed first by Clan Redeem. At this time the Power Level cap for players was around 550, which is substantially lower than it is today. The reason for that is the seasons that have launched in Destiny 2 since Last wish went live. Each season has increased the Power Level cap, so that now most Destiny 2 players are a much higher Power Level than the one recommended for the Last Wish raid, and by extension, Riven.

This in turn has made Riven more like the Crota of Destiny 2. Crota was a boss that was easily cheesed and defeated in Destiny 1, and quite often used to farm for powerful weapons and armour when The Dark Below expansion released.

Bungie could increase the Power Level cap for Riven and the Last Wish raid, but if they did then they’d be harming new players to the game. At this point Last Wish is fairly early on in the Destiny 2 content pipeline, so if it was made to be more difficult, new players would hit a stumbling block and potentially give up on the game. As a result, Riven now is, and probably will be for the duration of Destiny 2, an easy boss to defeat solo.

One good thing to come out of Riven being such an easy boss now, is that the Exotic Fusion Rifle, One Thousand Voices, is much easier to get. The weapon is a rare drop from killing Riven, but now players can probably grind for it with relative ease.

For more on Destiny 2 keep an eye on MP1St.

Japanese Players Can Finally Use the Fallout 76 Atomic Shop