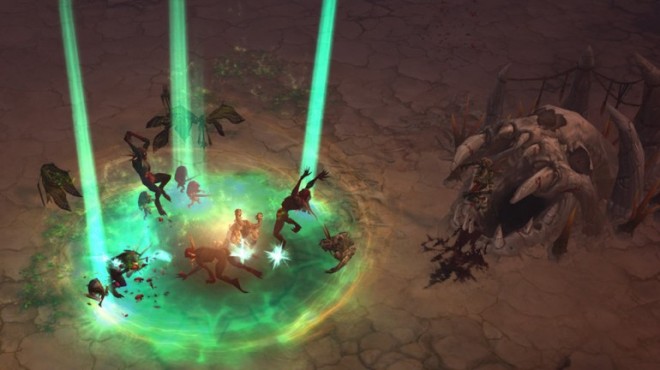 With Blizzard’s original player-versus-player plans not going as originally anticipated, Diablo 3‘s Team Deathmatch update will no longer be included in the upcoming 1.0.7 patch.

In an update to Diablo fans, Director Jay Wilson wrote,

We’ve been working really hard on the features, content, and systems for PvP in Diablo III and I wanted to take some time to provide an update on where we’re at. Of course, our goal has been to release our Team Deathmatch mode as soon as possible, but we don’t want to put anything out there before it’s ready. Right now, Team Deathmatch isn’t yet where we want it to be, and I want to provide some insight into where we are at in the development process.

Player-versus-player arenas were originally promised before Diablo 3’s release in the form of a future update. Having almost reached that point in time, it seems the decision has been made to cut what Blizzard feels is not up to the standards that Diablo fans have come to expect. Not entirely at a loss, Wilson explains the next few steps Blizzard will be taking:

First and foremost, if our original goal was to support dueling, then we’re not achieving that goal very well if we don’t actually give players a way to duel in-game. You’ve been asking us for dueling for a while, so we’re going to add it to the game soon. Dueling is currently scheduled to release with patch 1.0.7, which is set to hit sometime after the new year. (We’ll be providing details about that feature very soon, so stay tuned.)

But as I mentioned before, we are going back to the drawing board on a new replacement for Team Deathmatch, something that feels more appropriate for Diablo III.  And as we stated previously, regardless of when we release it, it’ll be a free addition to the game. Team Deathmatch provided us with the foundation that we needed and served us well. Hell, it may even still be added in some form in the future. For now, though, we’re going to first be looking at new modes that play up to the strengths of the character classes, focus on objectives beyond just defeating other players, and possibly even integrate PvE elements and rewards.

You can read the entire update on their official website.

Wilson also write that further news can be expected in the next few days.

Were you looking forward to Diablo III TDM? Do you think Blizzard made the right decision in cutting it from the next update? Let’s hear it below.