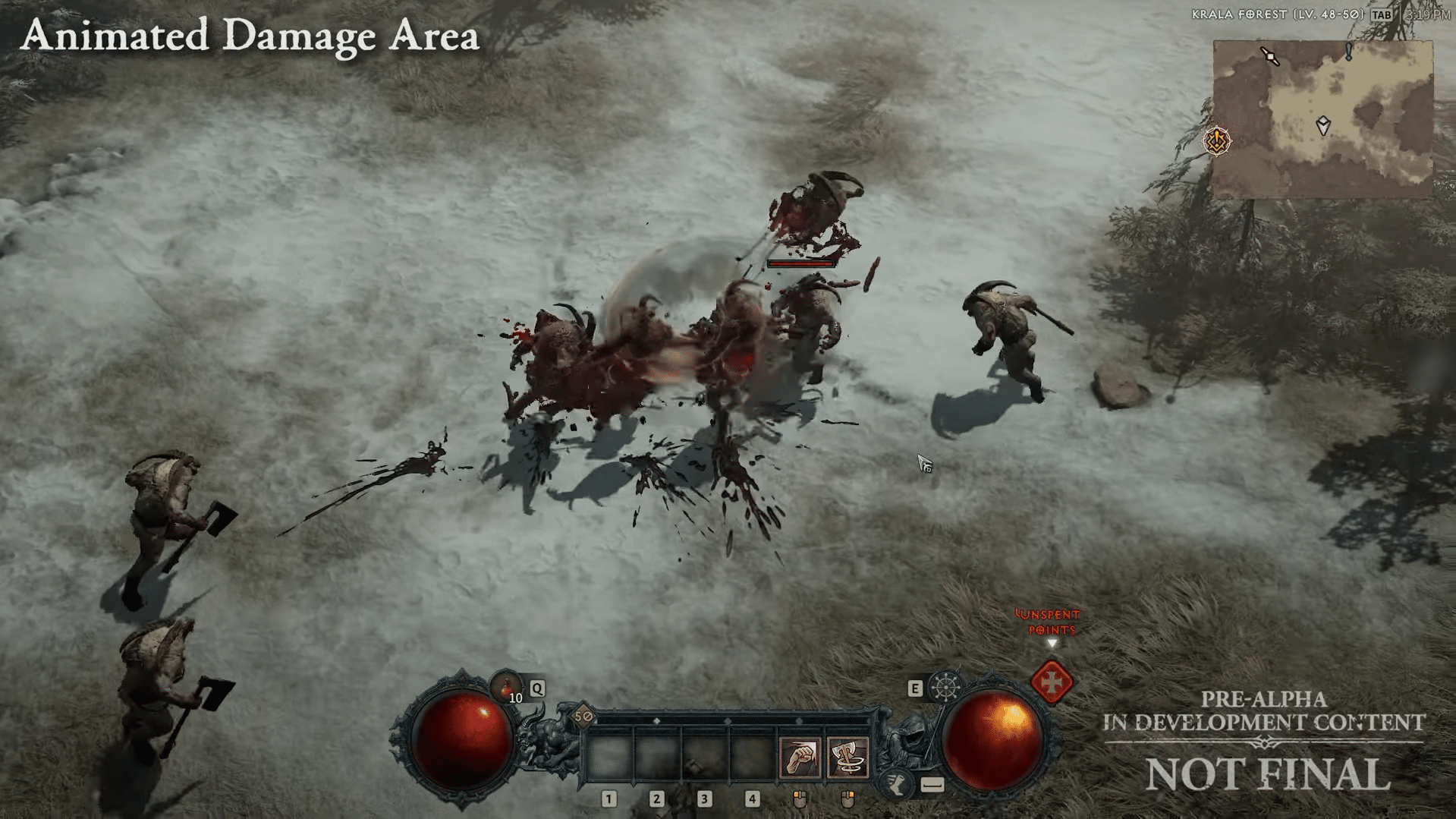 For their last quarterly update for this year, Blizzard has released the Diablo 4 Q4 dev update which breaks down several aspects like itemization, visuals effects, and so much more. Read on down below for a run down on Diablo 4 itemization and how it will play an important role for Blizzard’s next big title.

In Diablo IV, the +Skill Rank affix returns. As players invest points in skills, they grow in potency, and finding items with +Skill Rank can speed that along. As a bonus, when the player equips an item with +Skill Rank for a skill they haven’t learned, they will have access to that new ability. It’s a great way to try out new skills before you’re able to invest in them. Getting a lucky drop that nets you a skill you’d like for your build ten levels before you would otherwise have access to it is a huge boost!

As Joe Shely discussed back in our December 2020 update, Legendary and Unique Items remain a core part of the Diablo item chase experience. We’ve made a foundational change to Legendary items in Diablo 4 by allowing legendary powers to appear on multiple item slots. Now, if you’re searching for a legendary power, like Martial Arts—which enhances the Barbarian’s kick ability—you may find it on rings, chestplates, or helmets; there’s no need to hunt for a specific item type any longer.

The Occultist can extract a legendary power from a Legendary item, crystallizing it into Essence while destroying the item in the process. That Essence can then be implanted into another Legendary item, overriding the power that was present in the item at that time. Essence material can also be stored and used at a later time.

Sanctuary is a vast world, filled with forlorn trails through werewolf-infested forests, withered heaths crawling with cannibals, and fog-choked graveyards crawling with the restless dead. There are plenty of enemies and monsters for the hero to encounter. Each of these monsters seem to enjoy collecting certain types of items and will be somewhat more likely to drop those items than others. While bandits are fond of Maces, Crossbows, and Boots, if you’re hunting for a new pair of Pants, you’d do well to kill some of the Drowned instead.

In Diablo IV, we have placed a heavy emphasis on build customization, ensuring that you can have plenty of control over how your hero grows. The Paragon Board unlocks for each class at level 50 and is a distillation of this focus. Your hero begins their journey through the Paragon system at the central starting tile of their class’s intro board, and from there, you make selections radiating outward. Once your hero reaches a gate tile, you’ll choose which new paragon board you would like to attach to at that location. The desired outcome is a personalized set of bonuses that will empower your hero and honor your dedication to their progression, that will remain fun to tweak and adjust over many playthroughs.

A Socket is a special tile that can contain a Glyph. Glyphs are items found throughout Sanctuary that, when embedded into a Paragon Board, confer various benefits based upon the number of active tiles within their radius.

Glyphs can also be leveled up by delving into some particularly dangerous dungeons. Leveling up a Glyph extends the radius of their effect, allowing each one to draw power from or impart power to even more active tiles.

Gate Tiles and Board Selection

A single Gate Tile lies at each edge of the Paragon Board. As you progress through the Paragon Board, you will eventually reach a Gate Tile, which upon unlocking will allow you to select a new Paragon Board to attach to your existing Board. Each of these boards has unique Tile layouts, new Magic and Rare Tiles, and a new Legendary Tile at the center.

Every effect plays a role in the final composition of our game. It is important to understand the context of an effect, and how it best serves your experience.

One of our core values at Blizzard Entertainment is “Gameplay First,” and this drives a lot of the artistic decisions we make while developing visual effects for the game. Moment-to-moment gameplay is the focal point within the composition of Diablo IV: it should draw your attention. To achieve this, we must consider things like player skills, monster telegraphs, traps, damage areas, and character states. The visual effects for each of these components must be readable in all areas and lighting conditions, so you can quickly understand what is happening and use that information to make informed decisions.

In the chaos of combat, you’ll need to be smart—seeing a Legendary item drop is exciting, but picking it up is not as important as reacting to a monster’s attack that can one-shot Hardcore characters! Our goal is to balance the primary, secondary, and tertiary reads to help you understand what is happening. To do this, we reserve visually loud FX for powerful skills, like ultimate abilities, while weaker skills meld into the background. Each class has abilities that range from low to high in costs, cooldowns, and power. In tandem, classes have a range of visual intensity that increases with skill power.

To enhance the feel of combat, we have made several improvements to the way damage is applied in our game. In previous iterations of Diablo, an area-of-effect (AOE) or melee skill would be a single area of damage that is applied on a single frame. Thanks to our gameplay engineers, we can now animate target areas (what we call payloads) over multiple frames, which allows us to line up the animated target areas with the animated VFX that play out.

In Diablo IV, we use a PBR (physically based rendering) lighting model, which means our materials look and react to light in a realistic way. This approach brings huge rendering improvements, but this can be counterintuitive to what a player might expect for class and monster abilities. As an example, think about what a campfire looks like in full daylight—pretty lackluster, right? Next, imagine what a dust cloud or smoke plume would look like in the dead of night—it’d be nearly impossible to see. To account for this, we’ve built an engine and shader library that lets us break PBR rulesets in artistic ways. This ensures important gameplay moments shine through as clearly as possible while keeping immersive elements full PBR so they can realistically react to lighting.

In Diablo IV, we use lit VFX that meld into the environment’s lighting, creating a more immersive experience. Using Whirlwind as an example (seen in the video above)—in bright daylight, the blade reflects light from the sun. In a dark dungeon, it will reflect more subtle light sources, like torches. The dust kicked up by the skill is also lit by the environment, so it blends artfully into the world.

At the end of the day, it doesn’t matter what the art looks like if the gameplay isn’t fun. One of the goals for creating player skills is to ensure that the System Design team has a variety of modifiers they can utilize to create meaningful skill trees, class mechanics, Legendary items, and Paragon Boards.

Choices should affect more than your character’s stats. Once we have a class skill we are happy with, the VFX team adds the ability for developers to dynamically change the size, intensity, and duration of a skill. The visual intensity of a skill will increase as you stack upgrades and items that increase the power of that ability.

We want your character to look incredible as well! Our items are built in a way that allows us to easily apply weapon buffs to any weapon in the game. Not only will your legendary items do awesome things, but they will make your character look amazing as well. Here is an example where we apply the same fire and poison buff to several weapons in our game.

Sanctuary is a dark, gothic world filled with horrific monsters that do horrendous things. To survive in this bleak landscape, you must be merciless toward your enemies. We are bringing back a popular feature from Diablo III: skill-driven deaths. This system allows you to decapitate, bisect, freeze, shatter, eviscerate, and burn your enemies, to give a few examples.

You can read the full quarterly update via the official blog post on Blizzard’s site. Ahead of the game’s highly anticipated release, let us know what you think in the comments below!

Dead Cells Update 1.30 Out for Changes and Fixes This Dec. 20