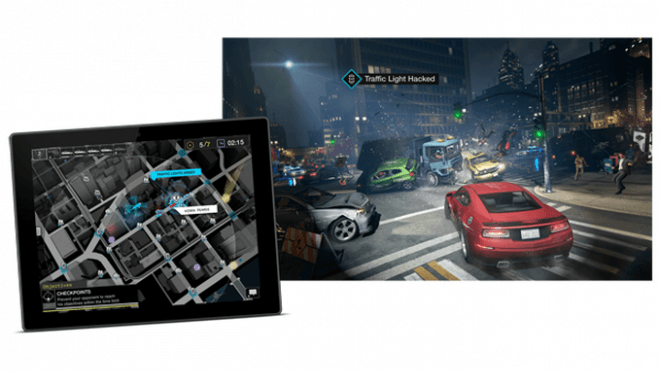 In Watch Dogs, Ubisoft lets you hop online using the game’s ctOS Mobile app. Players can log in using their Xbox Live, PlayStation Network, or UPlay account. On consoles, Xbox Live Gold and PlayStation Plus subscription are not required while memberships also extend to both console generations, meaning Xbox Live members can hop online with both Xbox 360 or Xbox One users, for example. The app boasts its very own progression system that isn’t tied to your play through in the console or PC game, meaning your accounts doesn’t need to be connected to your gaming platform of choice. In fact, you don’t even need a copy of Watch Dogs to play ctOS Mobile.

There are two ways to play with others using the app: Race and Free Ride. “Both modes are adversarial, pitting the console/PC player against the mobile player,” writes Ubisoft in the latest Ubiblog entry. “On the console/PC, the player must race from checkpoint to checkpoint. Every time a checkpoint is passed, more time is added back to the clock. The goal is to reach the final checkpoint before time runs out.”

“On the mobile app, the player is doing everything in his power to thwart his adversary. How so? By hacking into the city via a top-down map, triggering blockers, setting off explosions and causing all kinds of mayhem. Using ctOS Mobile, the player can also attack from above via a helicopter (complete with a sniper); and he can send the local police into hot pursuit.

According to Ubisoft, ctOS Mobile offers 26 challenges: 13 Races, 13 Free Rides, while also offering a fully customizable map generator, including weather and time of day. Friends can be invited to your game by entering their ID, or you can simply partner up with random players using the app’s Quick Match function.

You can download the ctOS Mobile on the Apple App Store or Google Play tomorrow when Watch Dogs officially launches. It will be available on the following 49 devices at launch: