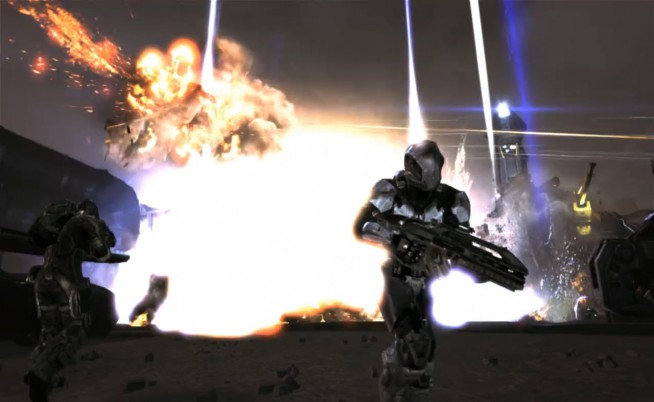 One of the most appealing features of Dust 514 is that it takes place in the Eve Online universe. When Dust 514 was first announced, it was said that both games would work with each other. At the time, no one really understood what exactly that meant, but Eurogamer managed to contact CCP developer Jon Lander for a more descriptive explanation.

One interesting thing that Lander mentioned was how Eve players could work as aerial support for Dust 514 players and Dust players as ground support. He explained it as “Air support for Dust mercenaries and factions on the ground.” It’s been said for a while now that Eve players may have the power to bombard planets that Dust players are on. Of course that will be faction based, meaning it would only harm opposing factions. They won’t be defenseless either as certain locations on the planet will be able to fire back. “We’re going to put it so that if you take control of certain installations on planets, they can fire back up, so you start getting this joint, real-time gameplay between the two,” Lander said.

Another way both games will interact is the way resources are transferred. A Surface Control Centre is the reward you get for taking over a planet. If an Eve player (one your allied with) has an Orbital Control Centre, then a Space Elevator is possible. Lander explains “If you and somebody in Eve are allied – so, in Eve you’ve got control of the Orbital Control Centre – then you get a space elevator, which makes the transport of goods and services that much easier and cheaper.” Chat channels, global market, and maps/universes will all be shared between the two titles.

The team plans on adding further interaction as well. In fact, they have a four-and-a-half-year roadmap plan once Dust 514 joins up with the Tranquillity Server (Eve Servers). Landers explained that after this has been done, then it will be the real thing.

This sounds like an amazing idea and I hope it turns out well. What do you guys think? Share your thoughts in the comments below.

A Real Life Look at Medal of Honor: Warfighter’s Weapons and Tools