As Dying Light fans rejoice now that the release date and gameplay trailer for the sequel have been unveiled, Techland has followed things up with the Dying Light 2 Stay Human pre-order bonuses and collector’s edition revealed — which should give players the heads up on what juicy incentives come with the special releases!

Here’s the image for the pre-order bonuses — which includes a unique Reload Outfit, Weapon Skin, and Paraglider Skin. 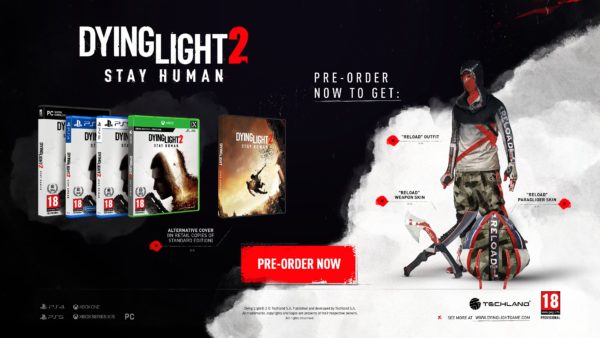 And here’s the collector’s edition in all its packaged glory — which includes a nice statue of a survivor taking on an undead monster!

here is the premise for Dying Light 2 Stay Human.

It’s been 15 years since humanity lost to the virus.

The last great human settlement exists within an unforgiving, infected world, plunged into a modern dark age. During the day, bandits, factions and starving survivors roam the streets scavenging for scraps – or someone to take them from, by violence if necessary. At night the infected roam free, evacuating their dark hideouts to prey on the living.

You are Aiden Caldwell, an infected survivor. Your exceptional agility and brutal combat skills make you a powerful ally and a valuable commodity in this dangerous world. You can achieve things no one else can. Enter places no one else dares. With your unique abilities you have the power to be an agent of change within this decaying metropolis.

The fate of the city is in your hands.

If you missed the gameplay reveal and release date details for Dying Light 2 you can check it out here.

Dying Light 2 will be released this December 7 for PS5, PS4, Xbox Series X|S, Xbox One, and PC.

Cyberpunk 2077 Gets a New Game Director in Gabriel Amatangelo

Cyberpunk 2077 Gets a New Game Director in Gabriel Amatangelo