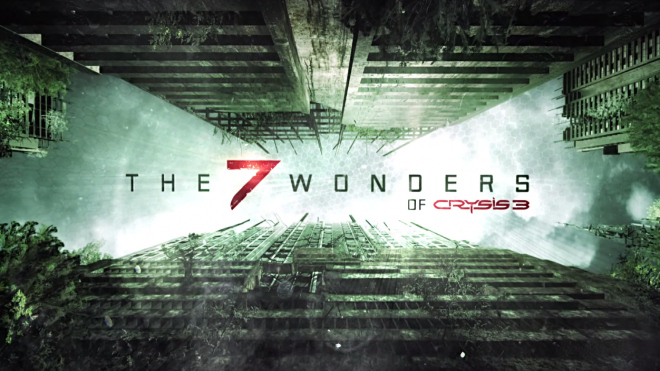 EA and Crytek will be teaming up with renowned filmmaker Albert Hughes to produce an online video series inspired by Crytek’s upcoming FPS sequel, Crysis 3. “The 7 Wonders of Crysis 3” will be a series of videos meant to set the stage for latest installment in the series by introducing the weapons, enemies and gameplay of Crysis 3. It will also take a look at the several dynamic environments featured within Crysis 3’s setting.

“When EA and Crytek approached me about being involved in creating ‘The 7 Wonders of Crysis 3’ video series, I liked the idea of creating emotional stories using only computer generated images,” said Hughes. “The challenge of producing something intensely human without ever seeing a human on screen was incredibly compelling, and the technology of the CryENGINE that Crytek developed enabled me to do that and venture into a completely unique medium of storytelling.”

Hughes shot to stardom at only 20 years old when he and his twin brother, Allen, wrote and directed Menace II Society. He then went on to co-direct films like Dead Presidents, From Hell and Book of Eli. His involvement in “The 7 Wonders of Crysis 3” will include writing the scripts, storyboards and shot plan for each video made up of entirely of in-game assets powered by Crytek’s CryENGINE 3.

Chief Executive Officer of Crytek Cevat Yerli added, “The goal with ‘The 7 Wonders of Crysis 3’ video series is to reveal the incredible world we have been building for Crysis 3 and to let CryENGINE take center stage to highlight the power of our state-of-the-art game engine. We’ve worked closely with Albert on this project and think that the 7 Wonders series will show the leaps and bounds that Crysis 3 is making over its predecessors.”

Check out the teaser right here:

Activision Puts Its Pinky to Its Mouth, Black Ops 2 Earns $1 Billion in 15 Days